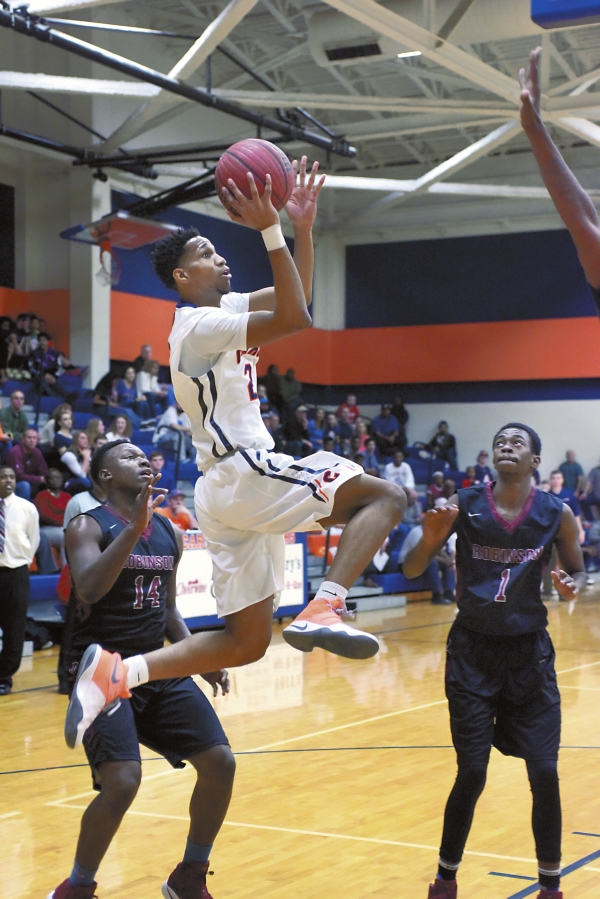 CHINA GROVE — Revenge was on the menu on Friday, and Robinson served up several helpings to Carson.

The Bulldogs, defending 3A champs, looked like potential repeat champs as they demolished the Cougars, 94-64.

“Carson can shoot and they shot great the first time we played them,” Robinson coach Lavar Batts Sr. said. “So the plan was simple — do a better job of contesting the 3-point line, box out, get the rebound — and run.”

Lavar Batts Jr., arguably the best senior in the state, showed why he’s a Virginia Commonwealth signee. Batts sat down after three quarters with 27 points in the scorebook. That he scored 27 was no surprise, but how he got those 27 was. He nailed five 3-pointers. He lit a match to the scouting report that said he was a fabulous transition player with an inconsistent outside shot.

“Batts is a guy that you have to guard for his drive,” Carson coach Brian Perry said. “When he’s making 3-pointers like that, it makes him a very tough matchup.”

Robinson relies on the 3-point touch of Isaac Boothe to spread the floor and open up driving lanes for Batts, but Boothe was ice-cold. That helped Carson stay close in the first quarter, and when Carson senior Brenden Westbrook drilled a long 2-pointer, Carson trailed 20-19 early in the second quarter.

But with a devastating, five-minute stretch of transition basketball, Robinson quickly pushed out to a double-digit lead. Carson was missing 3-pointers, and Robinson’s 6-foot-8 Jamari Roberts and  blue-collar Javonte Misenheimer owned the inside. Roberts blocked shots, Misenheimer grabbed every rebound,and the Bulldogs led 45-32 at halftime.

“They’re a lot deeper than we are, but fatigue wasn’t any kind of excuse in the first half,” Perry said. “We just broke down. We didn’t do a good job of getting back on defense, and they were running it at us. Still, at halftime, I though we could get it done. We just needed a few 3s to fall to get back in it.”

Carson never got back in it.

Owen White made a 3-pointer for Carson to make it a 51-37 game with 5:45 left in the third quarter, but when Batts answered with a pair of bombs, Robinson was ahead by 20, and it was all over.

It was showtime after that, with Roberts throwing down dunks, and Bulldog reserves making shots from everywhere. Reserve post A.J. Gallagher dribbled behind his back and scooped one in. Jason White was incredibly hot. He averages 3.8 points per game. He scored 17 and drained a trio of 3-pointers.

“They were really good tonight,” Perry said. “They played a great game at a very high intensity level. You try to keep coaching as hard as you can, but it was one of those nights where you want to go hide somewhere.”

Carson got 21 points from Jamarius Hairston, including a two-handed hammer dunk in the fourth quarter. Owen White was the only Cougar with serious success from long range. He hit four 3-pointers and scored 16. Westbrook turned in  a solid 15-point effort.

But Robinson got points from 10 guys, including four in double figures. It was one of the Bulldogs’ best efforts, but Coach Batts stopped short of calling it his team’s finest performance. He said that was the game against Concord in which Robinson scored 36 in the first quarter.

“We had a lot of Advil guys tonight,” Coach Batts said. “Lavar had a bad heel, and Roberts had a hurt knee, and we were missing (starter) Torraine Simpson with a sprained ankle. But the guys wanted this one. We played very well.”