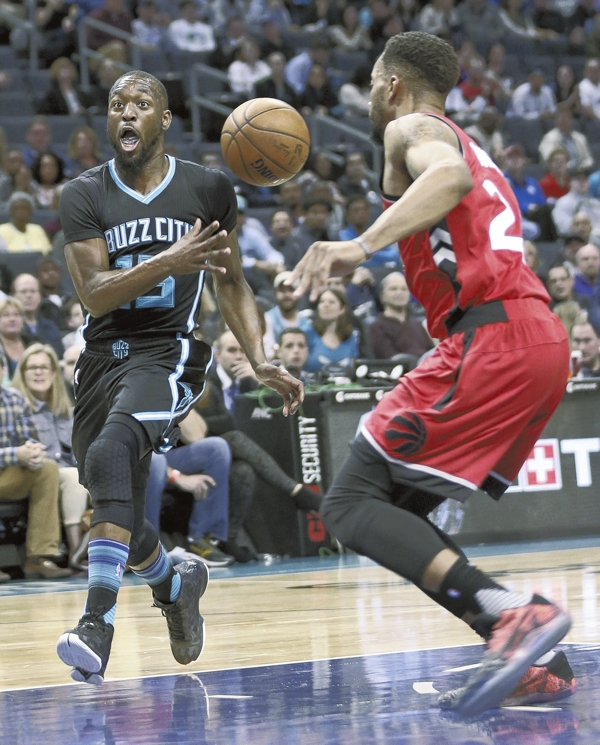 Charlotte blows by Raptors behind 32 points from Kemba

CHARLOTTE (AP) — Kemba Walker scored 32 points on 11-of-16 shooting, and the Charlotte Hornets beat the Toronto Raptors 113-78 on Friday night.

Walker, who came in averaging 23 points and looking to earn his first All-Star selection, scored 16 points in the pivotal third quarter, including a four-point play as the Hornets outscored the Raptors 33-15 to build a 25-point lead.

Walker didn’t play at all in the fourth quarter after the Hornets stretched their lead to 30. He finished with eight assists.

Frank Kaminsky had a solid night off the bench for the second straight game, scoring 16 points and grabbing eight rebounds.

Kyle Lowry had 24 points and DeMar DeRozan added 23 points for the Raptors, who have lost two straight.

The Hornets came in 0-7 this season against Cleveland, Toronto and Boston, the top three teams in the Eastern Conference, but left little doubt about this one and held the Raptors to 33 percent shooting.

Charlotte (22-21) came out strong with Walker effectively running the pick-and-roll with Cody Zeller. Walker scored 16 points on 6-of-9 shooting in the first half and had four rebounds and three assists.

The Hornets have won eight of their last nine at home, with the only loss coming against the Cavaliers.

Raptors: Held to 18 points on 31 percent (7 of 22) shooting in first quarter. … Lowry picked up a technical foul in the first half for arguing a call. Lowry was upset earlier in the game when he took a shot the mouth and thought he should have gotten a foul called but didn’t. … Jared Sullinger was assessed a flagrant 1 foul in the fourth quarter after knocking over Nic Batum on the way to the basket.

Hornets: Walker has scored at least 20 points in 30 of Charlotte’s 43 games this season. It was Walker’s seventh 30-point outing of the season. … Marvin Williams has made a 3-pointer in 17 straight games. … The Hornets are 15-1 when holding opponents under 100 points.

Raptors: Travel to Phoenix to face the Suns on Sunday.

Hornets: Will play tail end of a back-to-back at home Saturday night against Brooklyn.