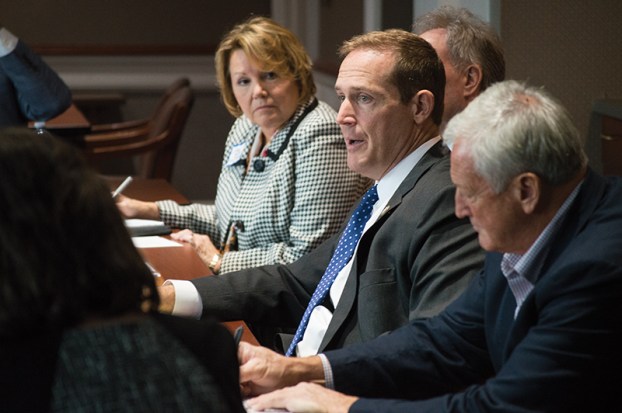 Josh Bergeron / Salisbury Post - Rep. Ted Budd, R-13, speaks to a group of people gathered at the Gateway Building in Salisbury for a listening session. The event was hosted by the Rowan County Chamber of Commerce.

SALISBURY — U.S. Rep. Ted Budd got an earful Tuesday during a meeting in downtown Salisbury about how poverty or a criminal record prevents people from taking advantage of job-training programs or getting a job.

During the hourlong meeting, Budd heard from local residents with diverse backgrounds — from Carol Spalding, the president of Rowan-Cabarrus Community College, to Alex Clark, a community activist who has established a mentorship program for at-risk youth.

The meeting was part of a listening tour that Budd, a Republican who represents the 13th Congressional District, scheduled across the area he represents. Salisbury’s meeting was hosted by the Rowan County Chamber of Commerce.

Most of the conversation Tuesday focused on concerns discussed by Clark and Kenneth Muhammad El, a community activist formerly known as Kenneth Fox. Early speakers talked briefly about the N.C. Manufacturing Institute, which uses businesses’ money to train or retrain people for jobs. Clark and Muhammad El countered that a skills gap prevents some from taking advantage of such training programs.

“Most of these people are socially crippled,” Muhammad El said during the meeting at the Gateway Building on East Innes Street. “They want the jobs, but when you come in and bring them into a nice place like this, it scares the heck out of them. … You’ve got to sit down with them and let them know ‘I’m in this with you.'”

People who market programs such as the N.C. Manufacturing Institute are not tuned in to the needs of communities such as East Spencer, he said. Many local residents who live in poverty are simply focused on paying for groceries or rent at the end of the month, he said.

There are still challenges after someone gets a job, he said.

“If they get a chance to do the job, the other thing that’s coming behind them is, ‘Do I have the right clothing, am I going to need to get a ride there, am I going to have to buy my lunch?'” Muhammad El said. “It’s embarrassing when everyone else is going up to the snack machine and other little old things that you guys probably don’t think about and take for granted that can be a big deal.”

Clark added that the task to get a good-paying job can be even more difficult for people with a criminal record.

“They want to do better, but, when certain things come up, I’m being disqualified for the job,” Clark said. “So you are talking about a world of second chances to where the past is constantly haunting someone. It can be very discouraging.”

Carolina Color CEO Matt Barr spoke about the difficulties convicted felons may face. He said there are programs to help convicted criminals, such as prison furlough programs. Barr said 80 percent of the people who work in his company’s production area are convicted felons.

“It’s amazing the redemptive qualities of these programs because I see it in their faces,” Barr said. “You know, they come in incarcerated. They come out fully employed and they keep their jobs, but that transition is just so difficult because of the mark you carry with a conviction.”

Barr cited local charitable efforts that aim to improve the prospects of children who live at or near the poverty line. He mentioned Crosby Scholars and the Appleseed Project, which is in the process of distributing hundreds of e-readers to children in Rowan County’s eight Head Start programs.

“There’s a desire in the community to help, but we also need help from the federal government, from the local government, and these guys who are at the tip of the spear are the ones who are going to get it done,” Barr said, referring to volunteers and community activists such as Clark and Muhammad El.

Realtor Karla Foster said the Salisbury and Rowan County community does not expect the federal government to “write a blank check” or solve all local problems.

“We’re not looking for a bigger piece of the pie. We’re looking to grow the whole pie,” Foster said. “If we can invest private dollars into these programs, that’s going to raise everyone, from the lowest to those that are on the top as well.”

Because it was a “listening session,” Budd talked for a limited amount of time. He introduced himself and asked periodic questions. After the meeting, Budd said he scheduled the tour to get a better understanding of constituents’ concerns and get out of the “Washington bubble.”

Budd said he will stay true to the platform he ran on but wants to understand all sides of an argument before making a decision.

By Amanda Raymond amanda.raymond@salisburypost.com SALISBURY – The city of Salisbury will be sending out requests for proposals for Fibrant, the... read more