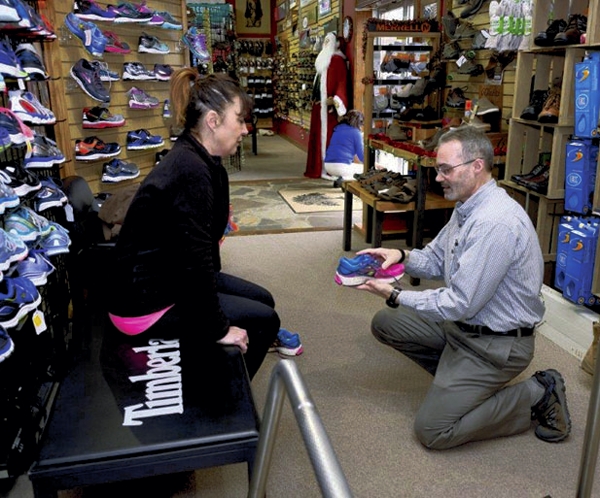 It was another chilly January day when Jennifer Payne and Michelle Patterson started their year of wellness training with me. Jennifer was a former athlete who didn’t make time to exercise anymore and had lost her way with a poor diet. She wanted to be a good example to her kids. Jennifer is a nurse manager at Novant Health.

Michelle couldn’t find a way to be consistent with her workouts and kept letting other issues cancel out making time for herself. Strawberry and pumpkin season were good enough excuses and just about anything else got top billing over her own wellness. Michelle manages a couple of farm markets and more for the family business.

Both women were overweight, had children and families, and sometimes let stress bring them down. Both were medicated for high blood pressure.

They committed to making 2016 their year of change.

Early risk assessments with Val Velte, Corporate Wellness Nurse at Novant Health, gave me an idea where we needed to start. Jennifer, 35, and Michelle, 51, generally were able to work out at similar levels, especially in the beginning. We got off to a fast start with both women pushing hard and making significant progress in the early months. Circuit training, spin bikes and some running were the key parts of their workouts together. Both took a few classes and did workouts separately and were about halfway to their goals by early June.

I left on my summer bike ride in June with a late July return. I found that the women had only mildly exercised and lost their momentum. We quickly refocused, and they used more running and group classes to get back on track. They did 5Ks and promised to monitor their calories consumed.

I asked both women to list their high and low points for the previous year.

Michelle had a couple of injuries from other activities and was disappointed that the scales didn’t move quite as much as she hoped. On the flip side, she watched her inches steadily come down as her running distance increased from one mile to 5.3 miles. Michelle also listed the social aspect of her workouts, including getting to know Jennifer and seeing other workout friends as a plus. The biggest thing is that she learned how to make time for exercise in a busy schedule.

Results for Michelle during the year’s work included a loss of 19 pounds, dropping her from overweight to squarely in the middle of normal for her height. She has already left behind one of her two blood pressure medicines and is on track to get rid of the other one. Migraine headaches, common prior to our program, have now stopped. Good cholesterol was up and triglycerides down, a result of increased cardiovascular exercise.

Jennifer had significant weight loss early and stretched out her running distance. She kept using the Novant cardiac gym regularly for her workouts. When she lost her way during the summer, some bad habits returned and continued during the fall with sporadic efforts to get back on track. Jennifer’s diet slipped before her strong push in December netted the biggest monthly weight loss since the first half of the year.

At year end, she had lost some inches but her weight remained essentially the same as at the start. Jennifer says that she is in the best shape of her life but control of calories in/ calories out will dictate future weight loss, as she appears back on track. Her final bloodwork also shows an increase in the good cholesterol and a decrease in triglycerides.

Going forward, both women plan to keep running and participate in the Winter Flight 8K in January and say that regular workouts are now part of their lives. Both agree that diet will be the key to their success. Bottom line, Michelle did much better with her diet and intensity of exercise throughout the course of the year and the results show it. The final pieces of the puzzle for Jennifer are to take the cardiovascular improvement to the next level, push herself to more intense exercise regularly while getting the diet under control. Michelle wants to drop five more pounds and Jennifer still has her original goal of 40 pounds to lose.

Both women said they enjoyed the challenges and the accountability. Rather than rate their efforts, I give myself an A minus on Michelle and a C on Jennifer. We’ll share an update at the end of March on their progress.

Next week—meet Brooke and Vivian!