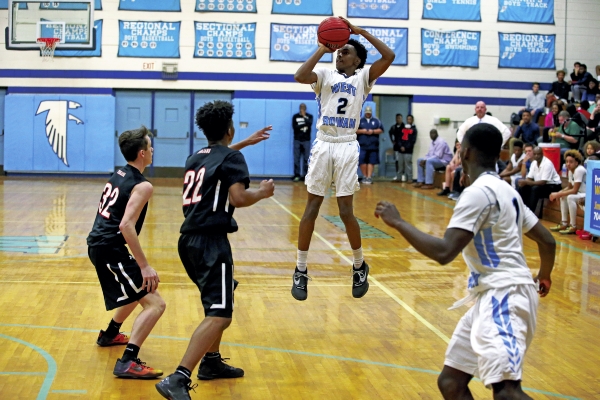 Gurley’s Falcons, playing without Austin Love (concussion) and Kortez Weeks (football recruiting trip), gave him some anxious moments on Friday, but they stayed in the thick of the chase for the top spot in the South Piedmont Conference with a 70-47 win against cold-shooting Northwest Cabarrus.

“We go up 22-2 at the start, but then we hit a lull and let them get back in it,” Gurley said. “It could’ve been a whole lot more relaxing night.”

When the same teams played on Wednesday at Northwest, the Falcons, who had Weeks for that one, were fortunate to escape. If Northwest hadn’t shot 12-for-32 on free throws, West may well have gone down.

West won its sixth in a row, the program’s longest streak since  a Keshun Sherrill/B.J. Sherrill team played in the  Western Regional in 2010-11, and the Falcons were more than ready for the rematch with the Trojans.

“Our defense got us going,” Gurley said. “Playing hard on defense led to fastbreaks and easy shots.”

Darius Kure made two 3-pointers right out of the gate as the Falcons soared in front, 8-0, and then Tyrese Lawrence, Love’s replacement, put in eight quick point on fast-breaks and stick-backs, as the Falcons surged ahead, 16-2.

“There was a lid on the basket for us,” NWC coach Eric Jackson said. “They packed in their defense, we couldn’t get the ball inside and we couldn’t make an  outside shot. They game-planned very well.”

No one could’ve game-planned for Lawrence. Not the way he was playing. He hadn’t scored in double figures this season, but he was on his way to a career best of 15 points.

“I’ve been playing OK, but not the way I’m capable of playing,” Lawrence said.

Early in the second quarter, the Falcons led, astoundingly enough, 22-2, against a pretty athletic opponent, but then the Falcons got sloppy, and Northwest started to make a few shots. When Ahmod Hester beat the horn with a jumper, NWC was down 30-16 at halftime, and even trailing by 14, the Trojans had a little momentum.

“He’s a load, just a very good player,” Jackson said. “We knew we couldn’t let him get the ball, and in the first half, we kept it away from him.”

But then Mauldin got a big two, and then Kure, fouled as he drilled a 3-pointer from in front of the West bench, got a quick four, and the Falcons’ lead went back to 15.  They were out of danger, and the Trojans didn’t mount a serious challenge the rest of the way. Northwest was forced to foul in a bid to come back, and Mauldin and Kure were automatic at the foul line.

“We came out for the second half playing slouchy,” Lawrence said. “We needed to pick it up and get back to playing the way we did at the start of the game, and we did.”

Without Weeks and Love, Gurley got a lot of productive minutes out of reserves  L.J. Robinson, Josiah Dixon and Elijah Lawson. Armoni Hogue, who started in Weeks’ spot, scored only two points, but his rebounding and defense were a factor.

“He got sick and missed the Cox Mill game, and he hasn’t been quite right with his jump shot since then,” Gurley said. “It was a great sign to see him making jump-shots again tonight.”

With a 16-point second half and a 12-point fourth quarter, Mauldin finished with 18 points and 21 rebounds despite his slow start.

Paris Hillie had an off-shooting game (two points), but the Falcons got a nice offensive lift from Martavio Rankin, who made two 3-pointers and chipped in with nine points.

Seventh-ranked West (11-3, 7-1 SPC) has won 10 of its last 11 games. The lone loss in that stretch was at second-ranked Cox Mill in the game Kure missed with illness.

Hester, a former South Rowan Raider, led the Trojans with 17 points and carried his team in the fourth quarter.