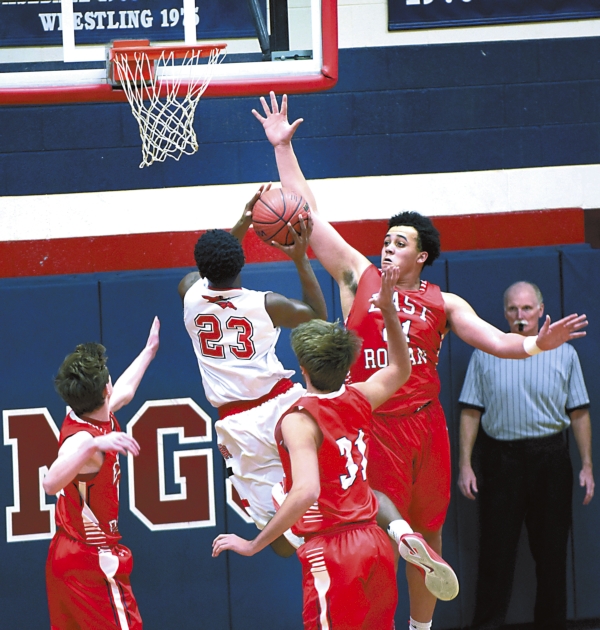 GRANITE QUARRY — Sooner or later, South Rowan will get that elusive first win of the basketball season but the East Rowan boys refused to be the victim Wednesday night at home.

The Mustangs rallied in the second half, then drained a succession of foul shots in the final two minutes to hold off the Raiders, 51-46, notching their first South Piedmont Conference win in the process.

The loss was the 38th in a row for the Raiders, dating back to last season as they dropped to 0-14 overall and 0-8 in the SPC for the current campaign.  “Every possession is critical in a game like this,” South coach Andre McCain said of the close battle. “We just have to make that leap. It is a mindset you have to have to get to the next level but it is coming.”

Trailing by as many as 11 point in the first half, East (3-12, 1-8 SPC) turned it up a notch in the second half to build just enough of a margin to secure the win. But it was not easy.

“It was definitely a struggle,” East coach Kurt Misenheimer stated. “Anytime you miss layup after layup it is going to be a struggle. South Rowan came out and fought hard tonight. They wanted to win that basketball game and they hustled and got after it. It was a scrappy game and we just made a few more plays down the stretch.”

The early stages of the game belonged to the Raiders as guard Bailey Graham and forward Garrett Harrington sparked a hot start to build a 17-8 lead, early in the second quarter. East started chipping away in the second period as point guard Lucas Morton drained a couple of threes and big man Brandon Jefferson powered inside for two buckets. By halftime, the big South lead was down to 22-20.

“At halftime we all just tried to pick each other up and talked about the things we needed to do,” stated Morton, who led the winners with 17. “It was really just a matter of keeping our heads in it and playing good defense.”

The Mustang comeback was complete early in the third period when Ellis Taylor drove for a tying basket, then Paiton File hit two foul shots to give East their first lead at 24-22. South tied the score twice after that but a key three-pointer by Gabe Hinceman built the East margin to 33-28 after three periods.

For the game, East paraded to the line 39 times, connecting on 25. South hit an impressive 12-of-16 free throws but were unable to get to the line more when it counted.

Following Morton in scoring for East were Hinceman with eight points, plus Jefferson and fellow post player Elton Hooper with six points and six boards each. For the Raiders, Graham led the way with 20 points, including a pair of three-pointers. Harrington added nine points and Dillon Kluttz had seven.

East will be at home again Friday night with county rival Carson coming to town. South will travel to Concord for an SPC battle against the Spiders.