Home in Faith surrounded; no one inside 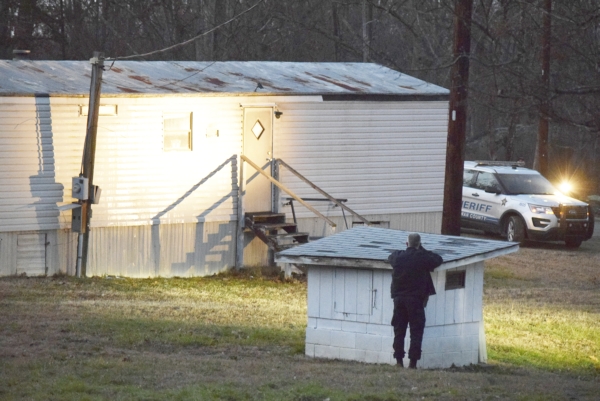 The Rowan County Sheriff's Office spent several hours surrounding a house on East View Road in Faith. Officials said suspects wanted in relation to a Sunday home-invasion and shooting were believed to be inside. Rebecca Rider/Salisbury Post

FAITH — As the sun began to set Wednesday, loud bangs echoed through a mobile home community on Eastview Road in Faith. Deputies with the Rowan County Sheriff’s Office fired tear gas and flash grenades into the home as they made repeated requests for whoever was inside to “come out with your hands in the air.”

Capt. T.L. Wyrick said deputies staked out the home because they believed Douglas Martin Patrick, 19, or Dustin Reid Hinson, 26, may have been inside.

Investigators identified the two after a 23-year-old man at 5595 Old Concord Road was shot in the upper left leg Sunday during a home-invasion-style robbery.

“They were supposed to be here, but they’re not,” Wyrick said of Wednesday’s incident at the mobile home.

According to a news release early Wednesday afternoon, the Sheriff’s Office received a tip from a 911 caller who said he had seen Patrick and Hinson at Walmart in Salisbury. Using a vehicle description provided by the caller, deputies began checking the area. A car matching the description was found nearby, but Patrick and Hinson were not inside.

At the same time, the Sheriff’s Office received information that the suspects were in a mobile home just outside Faith on Eastview Road.  A deputy on the scene told a Post reporter that law enforcement arrived at the home about 2 p.m. for a “knock and talk.” According to the news release, no one came to the door, but deputies believed someone was inside and withdrew to obtain a search warrant. Rowan County Sheriff’s deputies wait for a search warrant before entering a mobile home on East View Road in Faith. Deputies believed an armed suspect to be inside. Law enforcement fired flashbangs and teargas into the home, which proved to be empty. Rebecca Rider/Salisbury Post

The home was surrounded and monitored, and other residents of the mobile home community were asked to leave the area until the situation was clear.

Once the search warrant was issued, members of the Sheriff’s Office Special Response Team entered the home. The team cleared the home and declared it empty.

The search for the Patrick and Hinson continues. Anyone with information about them can contact Lt. Chad Moose at 704-216-8687, Detective Travis Allen at 704-216-8715. To remain anonymous and possibly collect an award of up to $1,000, information can be submitted at the website http://tips.salisburyrowancrimestoppers.org/ or by calling the Salisbury-Rowan Crime Stoppers at 866-639-5245.