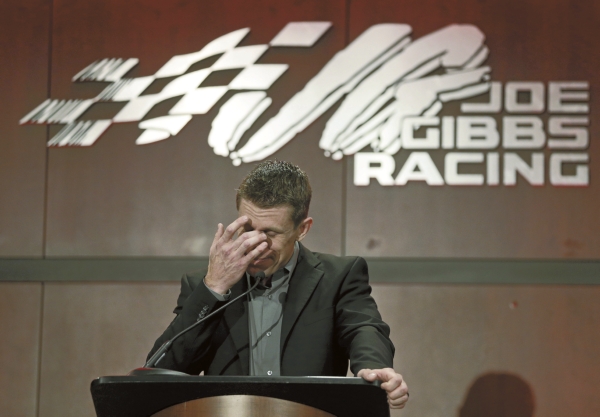 Carl Edwards pauses to wipe his eyes as he speaks to the media during a news conference at Joe Gibbs Racing in Huntersville, N.C., Wednesday, Jan. 11, 2017. Edwards announced he was stepping away from racing. (AP Photo/Chuck Burton)

He’s content with his career accomplishments. He wants to spend more time on his outside interests. He’s healthy and doesn’t want that to change.

Edwards, one of NASCAR’s top stars and driver for a top organization, really seemed at peace with a personal decision he made right before Christmas. But for a brief moment, he had to turn his back to the audience and compose himself.

“Yeah, I just want to be a good person, you know?” he said, his bottom lip quivering.

Edwards quickly recovered and returned to script. He has so many outside interests — aviation, agriculture, a possible career in politics — that he literally has no idea what will come next.

“There’s no life raft I am jumping on to, I’m just jumping,” he said.  “This is a pure, simple, personal decision.”

Edwards had one year remaining on his contract with Joe Gibbs Racing, and he came 10 laps away from winning his first Cup title two months ago. He informed Joe Gibbs in late December he did not want to race this season, and used about 40 minutes Wednesday at team headquarters to explain his reasoning.

“This was such a surprise,” Gibbs said. “When he sat down in front of me and shared what he was thinking, I was totally surprised. I said, ‘This is a huge decision, let’s take some time with this.’”

Four days later, Edwards and Gibbs spoke on the telephone and the team owner knew the decision was made.

“I could tell he was totally committed,” Gibbs said.

Roughly 10 minutes after Edwards finished, Gibbs began a second news conference in which Mexican Daniel Suarez was introduced as the replacement for Edwards’ No. 19 Toyota. Suarez is the reigning Xfinity Series champion and the first foreign-born winner of a national series crown.

“Since I moved to NASCAR when I was 16 years old, this has been something that I’ve been dreaming about,” Suarez said. “To be in this position is just something amazing.”

Suarez took an unusual path to NASCAR in that he moved to North Carolina alone intent on pursuing a career in racing that is rare in his country. He knew almost no English, taught himself by watching TV and has rapidly risen through the national ranks. He will now be the fourth driver for the most dominant team in NASCAR.

Edwards also had a difficult path. He was a Midwest racer who filled in the financial shortfalls by substitute teaching. He handed out business cards at race tracks, placed ads in trade magazines, anything to get his big break.

It paid off with a job driving for Jack Roush that led to a Truck Series championship and a rapid rise through NASCAR’s ranks.

Edwards twice came within moments of winning a Cup title. He lost to Tony Stewart in 2011 on a tie-breaker, then again in November when he was leading the season finale with 10 laps remaining when a debris caution set up a final restart.  Edwards had to block Joey Logano on the restart and it triggered a crash that ended his title hopes.

Despite that heartbreak, he said he’s walking away content with his 28 career victories.

“You guys know I don’t race just for the trophies,” Edwards said. “I’m rewarded by the challenges. I feel accomplished. I know sitting in that car, I’m the best I can be.”

Edwards, who lives in his home state of Missouri, is married to a doctor and has two young children, also wants more time to focus on outside interests.

“This is all-encompassing. Full time. Not just physical time,” he said. “I think about racing all day, wake up and have dreams about it. I’ve been doing it for 20 years. I need to take that time right now and devote it to people and things that are important and I’m really passionate about.”

He also insisted he’s healthy and that no one in his family needed his attention for medical reasons. But, his wife specializes in neurological rehabilitation, and Edwards admitted the concussion issues that plagued Dale Earnhardt Jr. most of last season were a wakeup call to the industry.

“I can stand here healthy after all the things I’ve done,” Edwards said. “That’s a true testament to NASCAR, the tracks. It’s a risky sport. I’m aware of the risks. I don’t like how it feels to take the hits we take. I’m a sharp guy. I want to be sharp in 30 years.”

NASCAR Chairman Brian France praised the contributions Edwards has made to NASCAR and the news conference was attended by a large contingent of NASCAR executives.

“Carl Edwards has made an indelible mark on NASCAR,” France said. “His hard-charging driving style has led to memorable moments that will live forever in the history of our sport. Carl’s passion and personality will greatly be missed – as will the signature backflips that NASCAR fans have come to expect following his victories. We wish Carl nothing but the best as he enters this next phase in life.”

And what will that be? Edwards was adamant that he doesn’t know. He promised there were no deals being made with another team or manufacturer.

“I do have really strong feelings about our country and what it means, what America is about, and the principles that keep us free and safe from the biggest risks in history,” he said. “I’m not prepared right now to participate in any public office or anything, but I am very open to helping that cause and helping the cause of liberty and freedom and what it is that America is about.”