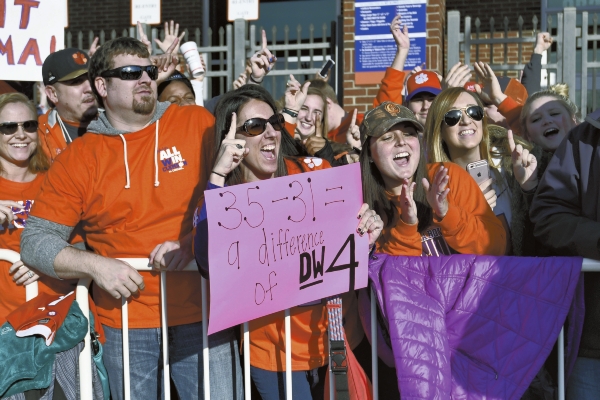 CLEMSON, S.C. (AP) — About 6,000 Clemson fans turned out Tuesday to welcome their national champion Tigers, capping a giddy day of celebration after their team toppled Alabama.

People screamed as the buses pulled up, calling out “DE-SHAUN” over and over as Tigers’ star quarterback Deshaun Watson walked with his luggage and national championship hat into Clemson’s football building.

“This means a lot,” said receiver Mike Williams, who like Watson will forego his final year in college and enter the NFL draft.

And what a way to leave. Watson accounted for 463 yards and four touchdowns in the 35-31 win over the top-ranked and seemingly unbeatable Crimson Tide. Watson’s final college pass was a two-yard throw to Hunter Renfrow for the game-winning score with a second left.

Watson walked to the crowd, which was kept behind metal barriers, to sign a few autographs and share a few hugs before waving and heading off. Clemson fans will get one more chance to see Watson and the rest of the Tigers on Saturday during a parade through town that will end inside Clemson’s Death Valley.

After that, Watson, Williams and many of the Tigers who helped Clemson overcome a 14-point deficit win its national title rematch with Alabama will scatter to train for their next showcase: Clemson’s pro timing day in front of NFL executives and scouts in early March.

But on Tuesday it was time for them to take another bow in front of a happy crowd.

Fans waved all kinds of signs, some simply saying “Thank You, Tigers,” to more pointed ones that read “We Want Bama” with the “Want” crossed out and replaced by “Beat.” There was even a sign asking if head coach Dabo Swinney’s son, high-school senior Will, would take the sigh-holder to prom.

“We couldn’t do this without these people,” said Ben Boulware, Clemson’s leading tackler who gave a stirring speech thanking the team’s past players as the confetti fell in Tampa, Florida, at Raymond James Stadium. “They’ve been here for all of it.”

There was a sizeable crowd of Clemson fans in Tampa with a smaller, but just as thrilled, group that watched the game on large screens in the middle of the blocked-off College Avenue on Monday night. After the dramatic win, the celebration lasted well into the morning. Clemson police said there were no serious incidents or vandalism, although six people were arrested on alcohol-related charges.

Fans spent much of Tuesday swarming souvenir shops in town, snapping up whatever “national champions” apparel they could find. They filtered over to the stadium around midday, awaiting the buses to pull in front. Artavis Scott, who became the Tigers’ all-time leader in pass catches this year, was first off and pumped his fist as fans shouted back.

“We have the best fans in college football,” Boulware said. “I know when Alabama won it last year, they didn’t have fans show up like this. The culture at Clemson is uncommon, so I’m super happy for our community.”

Boulware is among four senior defensive starters who will be leaving.  Clemson is also losing the team’s sacks leader in defensive tackle Carlos Watkins and two members of the secondary — cornerback Cordrea Tankersley and safety Jadar Johnson. The losses on offense are even more daunting with Watson, Williams, Scott, tight end Jordan Leggett, single-season rushing leader Wayne Gallman and Jay Guillermo all entering the NFL draft.

Defensive end Christian Wilkins, however, believes Clemson’s run at the top is not over.

“We’ve always recruited well. People had questions about the defense the past couple of years and you can see what we’ve done,” said Wilkins, a sophomore. “We think the same thing can happen on offense.”

Wilkins, who’s celebratory postgame split in Tampa went viral, was glad to celebrate back home with fans who’ve supported him throughout his career.

“We just dream of this moment forever and that’s why you come to Clemson,” he said. “We showed the world what we’re made of last night.”