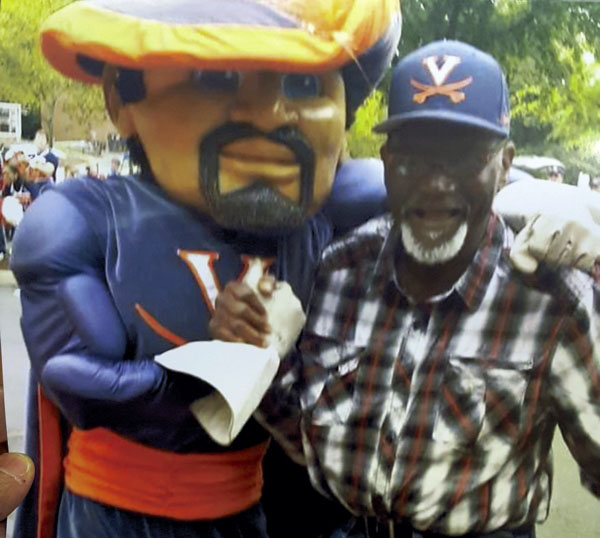 Submitted photo Shirley Cuthbertson, right, became a big Virginia Cavaliers fan because his grandson K.P. Parks was a good running back for the football team. He posed with the Cavaliers mascot during one of his final trips to Charlottesville to see K.P. play.

The men in Woodleaf had organized an afternoon softball game to celebrate the U.S. Bicentennial. Taking in the game was 8-year-old Stephen Bullock, who played for the Woodleaf Mets.

The Mets were a youth baseball team that often found itself playing heated rivalry games against the Woodleaf Braves, coached by Cuthbertson. After the men chose their teams for the Bicentennial game, Cuthbertson jogged barehanded out to left field.

A friend offered him a ball glove, but Cuthbertson laughed and waved it off. The game got under way, and it wasn’t long before an opposing hitter lofted a fly ball toward left field. Spectators held their collective breath as Cuthbertson moved under it.

Just as the sphere arrived, Cuthbertson took off his cap and neatly caught the ball in its webbing. The crowd went wild.

“I thought it was the greatest thing I’d ever seen,” Bullock says today. “The fact that I remember that moment 40 years later may tell you a little bit about what a special man he was.”

Shirley Cuthbertson was pretty remarkable. Go to places such as Woodleaf, Cooleemee, Advance, Mocksville and Salisbury, says Donnie, one of his many children, and “somebody knew my daddy.”

“He was a well-blessed man.”

Daughter Shirley Parks says it this way: “He was a man who loved people, period. Of all colors. And he was all about family. This is what he taught me and instilled in me — how to treat people.

“He walked what he talked.”

Shirley Cuthbertson died Dec. 6 at age 75 after battling heart disease, COPD and diabetes for many years. Everywhere he went, people called him “Pops,” whether they were related to him or not.

His given name of “Shirley” was, of course, unusual for a man. Sherry says he confessed that it frustrated him early on, and he tired of the people who would tease him. But Shirley learned to embrace it.

Cuthbertson had two of his five heart attacks in Cedar Grove AME Zion Church, where he was the preacher’s steward for 45 years and a member of the choir for 57 years.

His favorite song, Sherry says, was “At the Closing of the Day … Jesus and Me.” He and Virginia, his wife of 56 years, used to clean the church together, and apparently no one in the congregation did it better.

Shirley and Virginia raised 10 children, eight of whom are still living. They also had 26 grandchildren, 23 great-grandchildren and three great-great grandchildren, besides all the nieces, nephews, cousins and friends who called him “Pops.”

His kids look back, and they don’t quite know how he provided for the family.

Early on, Shirley worked for White Packing Co. in Salisbury, and though he made only $1.50 an hour, the company kicked in food such as hot dogs, livermush and sausage so no one went hungry.

Donnie Cuthbertson says his dad drove an 18-wheeler on the side for extra money. He would pick up a load of cows in the mountains and bring them back to the packing plant.

He also hauled scrap metal to Statesville. Later, Shirley worked several years at the Freightliner plant in Cleveland. He drove a BFI dump truck after that, until his poor health finally grounded him.

Donny describes his late father as a “go-getter,” though all of his doctors told him to slow down.

“I have to keep moving,” he told them. “I ain’t used to sitting still for so long.”

Shirley Cuthbertson was a pretty big fellow — 6-2, 200 pounds. So many of the Woodleaf kids from decades ago knew him as coach of the Braves.

Shirley loved all sports, but for many years, coaching baseball was his passion. He taught a lot of boys about fielding, hitting and winning.

Donny says he was extra tough on his own sons, but he told all of his players to “leave the attitude at home.” “Come out here,” Shirley said to them, “and we’re going to win.”

“All he had to do,” Donnie says, “was give me a look, and I knew I had to straighten up. There was a lot of tough love. I appreciated it. It made me who I am today.”

Bullock, vice president of sales and marketing for Power Curbers today, says Shirley Cuthbertson was one of the more memorable people from his childhood. Bob Wetmore coached Bullock and his brothers on the Woodleaf Mets, but they had a lot of respect for Cuthbertson and the rival Braves.

“Mr. Cuthbertson was loved by all for his energy, outgoing personality and love of kids,” Bullock says.

Shirley Cuthbertson attended as many of his children and grandchildren’s athletic events as possible. One of his grandsons, K.P. Parks, starred on state championship football teams at West Rowan High School and went on to be a four-year running back at the University of Virginia.

It was a special treat for Shirley to be able to travel to Charlottesville, Va., for one of K.P.’s games.

“You would have thought he was a kid in a candy store,” Sherry says.

Shirley Cuthbertson talked regularly with K.P., who became discouraged this past year when his chance to play professional football in Europe fell through. He was thinking about giving up football for good.

“Dad told him not to give up his dream, to take care of his family and some door will open,” Sherry says.

Their last conversation occurred two weeks before Shirley died. Within three days, K.P. received a call from a team in Germany, and he is scheduled to leave for Cologne in March.

K.P. told his mother something inside of him woke up after that last talk with his grandfather. Shirley’s children understand.

“That man taught me more than about baseball,” Donnie says.

Emil Sparger of Spencer wanted us to see the front page of the Jan. 2, 1939, edition of the Salisbury Evening... read more