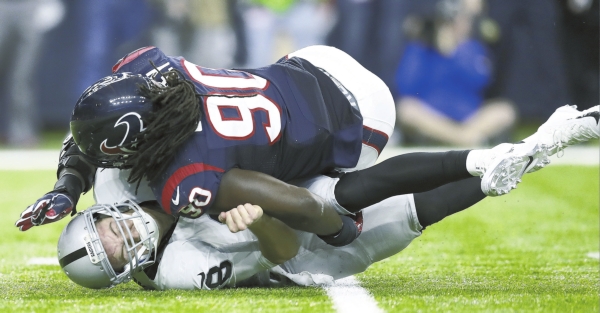 HOUSTON (AP) — Brock Osweiler finally looked like the player Houston spent $72 million on, throwing for a touchdown and running for another to lead the Texans to a 27-14 wild-card playoff win over the Oakland Raiders on Saturday.

Osweiler, benched on Dec. 18, got his job back this week with Tom Savage out with a concussion, and played his best game of the season to give the Texans their first playoff victory since the 2012 season.

Houston and its top-ranked defense, led by Jadeveon Clowney and Whitney Mercilus, bounced back after an embarrassing 30-0 wild-card loss to Kansas City last season to advance to face either the Chiefs or New England in the divisional round next weekend.

“We’ve been doing it all season as a defense,” Clowney said. “We’ll just continue to play as a unit.”

The Raiders’ first trip to the playoffs since the 2002 season, when they went to the Super Bowl, ended with a thud behind the struggles of third-string rookie Connor Cook.  He threw for 161 yards with one touchdown and three interceptions.

He became the first quarterback in NFL history to make his first start in a playoff game after MVP contender Derek Carr broke his leg two weeks ago, and Matt McGloin injured his shoulder on Sunday. His performance wasn’t helped by star left tackle Donald Penn missing the game with a knee injury, which ended a streak of 160 straight starts.

The Raiders (12-5) cut the lead when Andre Holmes grabbed an 8-yard touchdown reception on their next possession. Oakland got a stop after that, but Corey Moore intercepted Cook on the next possession.

DeAndre Hopkins had a touchdown reception for the Texans and Lamar Miller gave Houston a 10-0 lead in the first quarter on a TD run one play after Clowney’s first career interception.

“Get to the quarterback,” Clowney said of his team’s mission Saturday. “I know he’s going to hold it, don’t know where to go with it. That’s what we’re hoping, trying to make plays on it.”

It was the first career playoff game for Osweiler, who was benched for Peyton Manning before the postseason last season with Denver. He finished with 168 yards passing.

Houston took a 3-0 lead with a 50-yard field goal by Nick Novak with about eight minutes left in the first quarter.

Clowney batted a pass by Cook with one hand, then tipped it with his other one before pulling it down for the interception later in the quarter. The top overall pick in the 2014 draft probably would have scored on the play, but in the time it took him to grab the ball, Raiders running back Latavius  Murray had latched on to one of his ankles and was pulling him down.

Miller scampered untouched on the next play for a 4-yard touchdown to make it 10-7.

The Raiders got a 2-yard TD run by Murray late in the first quarter.

Houston added a field goal in the second quarter before making it 20-7 on a 2-yard reception by Hopkins. That score was set up when Osweiler delivered a 38-yard pass to Hopkins just before the receiver stepped out of bounds two plays earlier.

Oakland had trouble converting third downs Saturday. They failed to get a first down on their first 11 attempts. The Raiders finally converted one early in the fourth quarter and another came later in the drive that ended with the TD by Holmes. They ended 2 of 16 on third downs.

Houston looked to have scored a touchdown on a 57-yard punt return by Tyler Ervin late in the third quarter. But the score was nullified because Mercilus ran into punter Marquette King on the play. He punted again and it almost turned bad for the Texans when Ervin muffed that one. Luckily for Houston, teammate Eddie Pleasant grabbed the ball after it bounced away from Ervin.

Raiders: Oakland is left to ponder what might have been had Carr not been injured.

Texans: Look to win a divisional playoff game for the first time in franchise history after losing in their first two games in that round.