Roy Rogers: King of the Cowboys packed the house in 1975 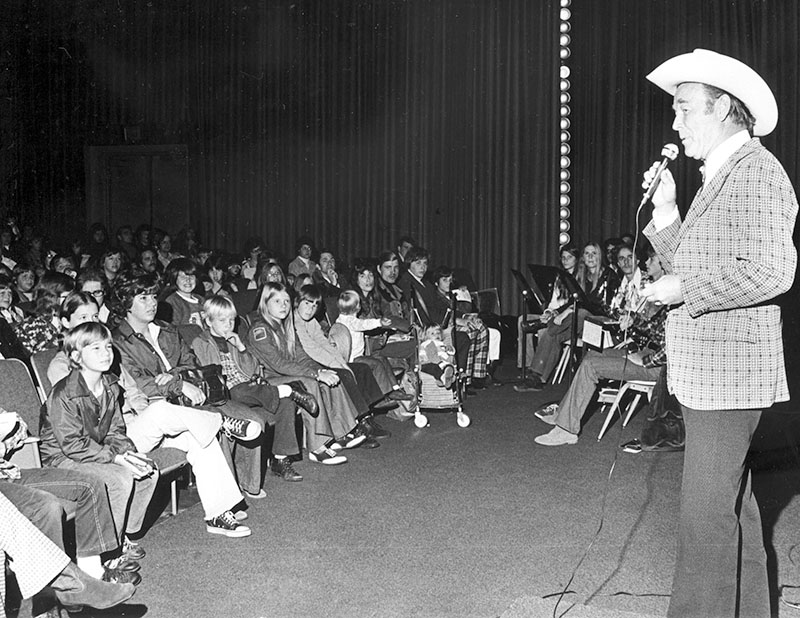 Submitted photo Cowboy singer and actor Roy Rogers speaks to a packed house of kids, parents and fans in general at his Saturday morning appearance at the Terrace Theatre in Salisbury on Nov. 15, 1975.

Kings.
Seems there are a lot of them. Not even counting those of a religious or political nature, we have Elvis Presley, the king of rock ’n’ roll; Richard Petty, the king of auto racing; and Clark Gable, the king of Hollywood.
Even pro wrestling has a king — Jerry Lawler (even if that one is self-proclaimed).
And there’s the man who was known as the King of the Cowboys. I speak in the movie vernacular. His name was Roy Rogers. Now that wasn’t his real name. Movie stars seldom used their real names way back then.
He entered the world as Leonard Franklin Slye, a native of Cincinnati, not exactly the cowboy center of the universe. Nevertheless, he journeyed westward to California at the age of 18 and soon was singing in various musical groups. His career caught fire in 1934 when he and friend Bob Nolan formed a group known as the Sons of the Pioneers. They quickly became the No. 1 country-western group in the nation.
People at Republic Pictures, a studio that specialized in movie serials and cowboy pictures, spotted Slye and saw promise in the young man, not only as a singer but actor as well. His first acting role came as a villain in a western starring Gene Autry.
Soon he was the good guy star of his own cowboy pictures.
A big part of the duties of Republic’s cowboys was traveling all over the country making personal appearances, and Roy did his part. He came to Salisbury not once, but twice.
The year after making it big in pictures, Roy Rogers appeared on stage at Salisbury’s State Theatre (now the Meroney). The date was June 12, 1939. I regret I can’t give you any first-hand details of the appearance, other than Lucille Ball was in the movie that was shown that day. Roy appeared on stage between showings of the movie the entire day.
But I can be of more help regarding Roy’s return to Salisbury — 36 years later — on Nov. 15, 1975, at the Terrace Theatre in the Towne Mall Shopping Center. I was managing the Terrace Theatre at the time.
Roy hadn’t made a movie since 1952, when he appeared with Bob Hope in “Son of Paleface.” That changed in 1974 when Roy was approached by an independent film producer and asked to star in its upcoming feature, “Mackintosh and T.J.”
Roy liked the script. He would play an aging wrangler who had to look after a homeless young boy.
On a day in October 1975, I received a call from my district manager, telling me we would be playing the new Roy Rogers movie for Thanksgiving.
“Roy Rogers? Are you kidding” I asked.
And to help give the movie a big push, Roy would be in Salisbury on Saturday morning, Nov. 15, from 10:30 a.m. to noon.
I was elated. Saturday morning! Perfect. I won the personal appearance lottery. Some towns had him during the day on Thursday and Friday when the kids were in school and the theaters weren’t even open. But Saturday morning? I could have fun with this. And I wanted Roy to be glad he came to Salisbury.
But what to do to accomplish that goal?
The obvious answer was to show one of Roy’s old westerns, if I could get one. A call to the man who booked the movies for our three Salisbury theaters said he would call around and see if he could find a 35-mm print of ANY Rogers western. He found one in New York. The shipping fee was fifty bucks.
“Fine,” I replied. “Get it.”

So the first major hurdle was accomplished. Roy’s visit would begin with “My Pal Trigger,” a B-western Roy had made with wife Dale Evans and friend George “Gabby” Hayes way back in 1946.

Next, I thought it would be nice to have a city of Salisbury official be on hand for Roy’s visit. I called then Mayor Bill Stanback and asked him to participate. Mayor Stanback graciously said he would be there.

One of my concession stand young ladies told me North Rowan High School had a really good pep band. So I called the school and got the band director on the telephone.

I couldn’t text or email him then. I told him what was going on, and he was very excited and said the NRHS Pep Band would be there. I asked if, by chance, he had sheet music for Roy’s theme song “Happy Trails.”

He said no, but that he would compose an arrangement. Talk about going the extra mile.

And so, because of the help of some really gracious people, the plans all fell perfectly into place.

The Saturday morning of Nov. 15 found me at the Terrace around 7 a.m. Up first was to change the marquee. Down came “The Pink Panther,” and up went “WELCOME ROY ROGERS, KING OF THE COWBOYS.”
The staff arrived around 8:30 and prepared the concession stand for what I hoped would be an avalanche of people. The NRHS Pep Band pulled in a little later. I asked them to set up down front to the left side of the screen. The microphone where folks would speak was on the right side.

At 9, we opened the doors to the patrons who had formed in the parking lot. Very quickly, the 600 seats of the auditorium were filled. The pep band played a selection of songs for the crowd.

People then started to fill the aisles and line up across the back row of the auditorium. Then they spilled out into the lobby, and it became very crowded. Fortunately, none of the 800 people then in the building (by the Salisbury Post estimate) was the Salisbury fire marshal, or there might have been a problem.

“My Pal Trigger” hit the screen around 9:30. Mayor Stanback had also arrived. Inside the auditorium, folks were watching the 1946 version of Roy Rogers. Right on time at 9:30, the 1975 Roy Rogers rode up to the Terrace Theatre, not on horse Trigger, but in a white convertible.

The difference between the two Roys was slight. The nearly 30 years had been very kind to him. We rushed him through the side door up the stairs to my office, where for the next 30 minutes, we “chewed the fat.”

Roy’s long-time manager, W. Arthur Rush, popped his head into the office and said we needed to get Roy down front.

As I walked down the aisle towards the microphone, we actually stopped the movie before it had ended. No one seemed to mind. I gave Roy the best introduction I possibly could, ending it with “Welcome the King of the Cowboys, Roy Rogers!”

The NRHS pep band hit “Happy Trails,” and Roy jogged down the long aisle and took the microphone from me. Instead of starting to talk, he turned to the band director and said, “Play it again,” then sang the entire song for the crowd assembled.

I then introduced Mayor Stanback, who welcomed our guest to Salisbury and then presented Roy the key to the city. Then Roy spoke for a bit about his career and the new movie he had made.

A Q&A session went on for about 20 minutes. Folks asked Roy all sorts of questions: How was Dale? What was she doing? Did he really have Trigger stuffed?

And soon it was time for Roy to move on to the next town. He left the building by going through the lobby, speaking to the folks who hadn’t been able to get into the auditorium. People gave him gifts. Some women kissed him on the cheek. As he got into the white convertible, he said to me, “Thank you for a wonderful morning.”

I was probably speechless, a rare occurrence.

They then headed south, not west.

The movie started again, things wrapped up inside, and the crowd dispersed.

I went back up the ladder to the marquee. Down came “WELCOME ROY ROGERS, KING OF THE COWBOYS,” and back went “The Pink Panther.” We had a 1 p.m. matinee. No time to reflect. But I have many times since.

The following Monday morning, I received a call from our advertising director telling me more people turned out to see Roy at the Terrace in Salisbury than at the Tryon Mall Theatre in Charlotte.

I later received nice letters from our company president and my district manager, but the letter that touched me the most came from Roy’s manager, Art Rush. He stated the Salisbury appearance drew the largest turnout of any city Roy visited, and that no other town had put on the show Salisbury did.

Roy had been very impressed.

Leonard Franklin (Roy Rogers) Slye passed away in July 1998 at the age of 86. Dale Evans followed in February 2001. To many people, they have become part of western Americana just like Wyatt Earp and Annie Oakley.

And for one brief Saturday morning, 801 of us Salisburians rode the happy trails with him.

Mike Cline’s website, “Mike Cline’s Then Playing,” documents all the movies played in Salisbury and Rowan County theaters from 1920 to today, while also including Cline’s personal insights on movies and numerous examples of old movie posters.