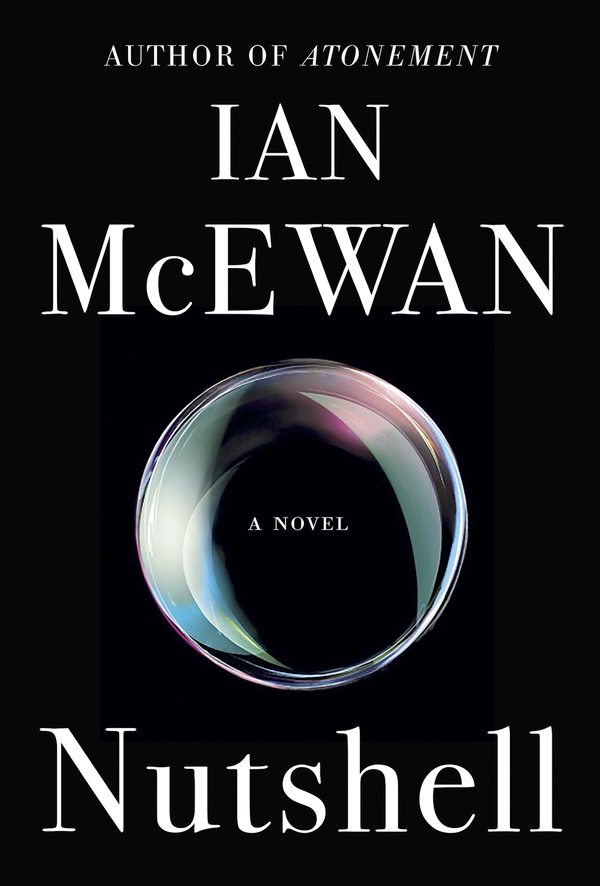 In a ‘Nutshell,’ you will love this book

Are you ready for a fetus as narrator?

Don’t think it’s been done until now, when the archly clever Ian McEwan did it for his latest book, “Nutshell.”

McEwan is known for his experiments — his novel “Saturday” took place in one day, with a very limited cast of characters. The setting is claustrophobic and the action is painful at times.

In “Nutshell,” he creates the most erudite baby of all time. And for someone who is in the womb, the baby sees a great deal — often more than wanted.

The interpretation of emotion and action is spot on. Who better to know a mother’s feelings than the child in the womb?

The plot is this: Mother Trudy is unhappily married to father John; they live apart. She lives in the crumbling family home, which is worth millions simply for its location. He lives in shabby rooms in Shoreditch, evocative of a damp, deserted place.

In the familial home with Trudy is her lover, Claude — John’s own plodding brother. He goes from one banal thought to another — in other words, he’s dim. While John is a poet and teacher, Claude is “in property.” One imagines that he’s “in property” just long enough to know the lady in a Biblical sense and make a sale. He thinks with his appendage. It certainly gets more action than his brain.

Trudy is bored with her marriage, bored with the world, bored with being pregnant, and she needs to get rid of her husband.

If she’s not careful, she’ll be rid of her baby, too. Trudy drinks quite a lot — two, three, four glasses of wine, gin, liquor, and Claude pursues relations with her well into her third trimester. The baby deeply resents this intrusion into its space, describing it as the “Wall of Death.”

But the most disturbing thing our child-to-be discovers is that its mother and Claude plan to do away with John — erase him from the earth, so they can sell the house and move to a more pleasant climate to spend John’s money.

Does the story sound vaguely familiar? Of course it does. Our fetus is Hamlet, plotting revenge for his mother’s murder of his father. Trudy/Gertrude, the faithless wife, Claude (ius) the usurping brother.

McEwan’s baby describes its circumscribed world: “My limbs are folded hard across my chest, my head is wedged into my only exit.” The child’s world is limited, but not limiting, as it explores the motives and motions of the would-be murderers.

This narrator, perspicacious beyond its years, can quote English poetry, knows all about history. the child makes metaphors and piercing observations. Seemingly bored, trapped in the uterus, the baby muses on all manner of topics, including the motives for this deadly plan.

The fetus begins to wonder if it will be or not be. He — you will eventually decipher he is a he — ponders his father’s death and sees his ghost.

The story never becomes gimmicky, only more compelling. We know who will do it and why (vaguely), but the thrill builds as the conspirators collect gloves, wax and poison, as the victim nears the scene of the crime.

Baby boy describes in excruciating detail the effects of the chosen poison. He can feel his mother’s heart racing, her breathing changing, even the odd high from the shot of adrenalin.

Will Trudy betray Claude? Will Claude take the money and run? Our baby ponders all this, debating his fate, imagining a life in prison with his mother.

Baby-to-be paints his father as a soulful poet with his pathetic poetry publishing business. The noble sufferer. Trudy, at times, appears as a good, old-fashioned harlot, with her apple white skin and emerald eyes, not to mention her enlarging bosom due to imminent birth.

It’s hard to imagine that Trudy, at 28, has known John for a decade. Current technology seems missing,  although Trudy is addicted to podcasts.

But it’s not fair to pick nits. It’s a driving plot, the baby’s brilliant thoughts and the sense of impending danger, even doom, will keep you awake for one straight-through reading of this short novel.

After you’ve finished, you’ll feel strangely satisfied and curious. What will happen to our perspicuous bairn? This one is ripe (pun intended) for wonderful discussions across many topics —Shakespeare, murder, modern life.

What is causing this gluten mess?  We know that a loss of immune tolerance predates disease onset. Why do we... read more