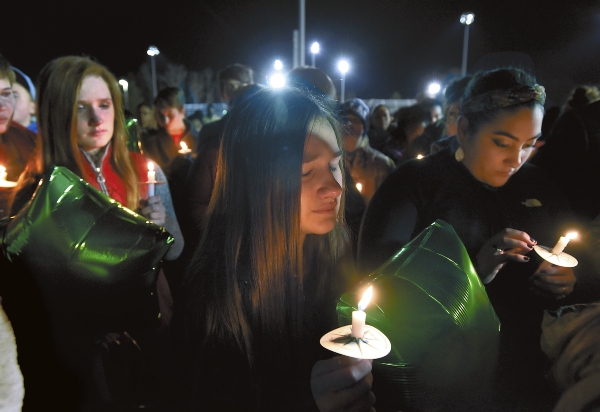 Many tears flowed down faces at the candlelight vigil at Kannapolis Middle School in memory of Anthony Frazier. photo by Wayne Hinshaw, for the Salisbury Post

KANNAPOLIS — The past two days have been a dark time for Kannapolis Middle School, but on Thursday, students hoped to kindle a little light.

After the Tuesday death of 14-year-old Anthony Frazier, a student and basketball player, the Kannapolis community was overwhelmed with grief. The seventh-grader, son of Kannapolis Police Officer Daniel Frazier, was shot Monday while in a car in Charlotte. According to Rowan County Sheriff’s Office spokesman John Sifford, Frazier is also a former Rowan County deputy.

Charlotte Mecklenburg Police have said Anthony was celebrating his birthday with family. He and his aunt were pulling into a driveway on Finchley Drive, near Eastway Drive, about 10:20 p.m. when the shooting occurred. He died at Carolina’s Medical Center on Tuesday night.

“They were crying on each other’s shoulders, but they were able to talk it out,” said Ellen Boyd, director of community relations for Kannapolis City Schools.

By afternoon, they banded together and began organizing a vigil in his honor. Thursday night, a crowd of hundreds gathered on the track behind the school, bundled against the cold, clutching candles and proudly wearing pins with a picture of Anthony. The vigil came together quickly, organizers said.

“It was all from the heart,” said Krista Chapman.

Chapman is the mother of one of Anthony’s teammates. She said his death has hit the boys hard.

“There’s a hole in his heart,” she said of her son, Braden White. “…There’s that missing piece.”

Chapman said she remembers Anthony as an “amazing young man” who “smiled 24/7.”

“He was everyone’s friend,” she said.

During the hourlong vigil, people who knew Anthony spoke through tears about his humor and his smile.

Kannapolis Middle’s school resource officer, Officer Downs, remembered that Anthony always greeted him with a left-handed handshake. Downs said that when he asked Anthony why, the teen told him,

Downs said Anthony taught every student at school that they could be “small in stature but the biggest person in the room.”

“We’re here tonight not to mourn the death of a child but to celebrate the life of a young man,” he said.

But for many attending the vigil, celebration was the furthest thing from their minds. It was an emotional night, with students and parents alike crying and holding onto each other for comfort as they sang, released balloons tied with prayers and remembered. Anson Phillips, a member of the Refuge Church who was often involved at the school, helped lead the service. He said that while the vigil was a “memorial service of celebration,” there was likely a large gap between that goal and where the community is emotionally. But he encouraged people to grieve.

Honoring Anthony would be “a step towards celebration,” he said.

Other speakers included classmates of Anthony. A member of his basketball team, who was not identified, said he received a text message from Anthony over the weekend that said, “Can’t wait to see you Tuesday when we get back to school.”

“Anthony was love,” a family member said. “He never gave hate to anyone.”

Anthony’s coach, Jarold Griggs, remembered him as someone who was respectful and concerned for others and who fought for everything on the court. Griggs said Anthony didn’t see black or white when he looked at someone — he saw a person, and he cared about that person.

Griggs asked those present to go out and make the world a better place so that “things that took Anthony’s life won’t continue to happen.” The vigil was coordinated with help from Kannapolis Middle School staff and students, the Refuge Church, the Kannapolis Police Department, Okeya Sherrill and Patricia Ware.

Charlotte-Mecklenburg Police are looking for two men in their late teens to early 20s in connection with the shooting. They are offering a $15,000 reward for information leading to an arrest. Those with information should call Crime Stoppers at 704-334-1600.

The Kannapolis Police Department is taking up a collection for the Frazier family. Donations should be sent to or dropped off at the department at 401 Laureate Way, Kannapolis, NC 28081. Donations also can be given at the city office at the same address. Checks should be addressed to Kannapolis City. Law enforcement officials said this collection is not associated with a separate fundraiser on the website GoFundMe.