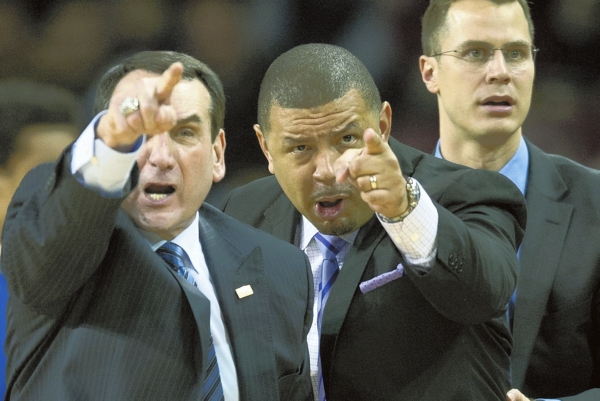 FILE - In this Jan. 2, 2016, file photo, Duke head coach Mike Krzyzewski, left, and associate head coach Jeff Capel gesture during the first half of an NCAA college basketball game against Boston College, in Boston. At far right is assistant coach Jon Scheyer. Simply mentioning “back surgery” and “Mike Kryzyzewski” in the same sentence is enough to give even the most dedicated Duke fan _ or hater _ a flashback to 1994-95. With Kryzyzewski sidelined for the final 19 games of that year, those Blue Devils finished 13-18 and became the only Duke team since 1983 to miss the NCAA Tournament. (AP Photo/Gretchen Ertl, File)

1995: This Duke not those Blue Devils

DURHAM (AP) — Simply mentioning “back surgery” and “Mike Kryzyzewski” in the same sentence is enough to give even the most dedicated Duke fan — or hater — a flashback to 1994-95.

With Kryzyzewski sidelined for the final 19 games of that year, those Blue Devils finished 13-18 and became the only Duke team since 1983 to miss the NCAA Tournament.

But this is 2017 and just about everything around the Duke program has changed in the 22 years since the last time Krzyzewski took such a prolonged break. The coach had what his doctor calls successful surgery Friday to remove a fragment of a herniated disk in his lower back.

Dr. Allan Friedman said in a statement issued by the school that the procedure “went exactly as planned.”

With Jeff Capel’s season debut as acting head coach coming Saturday against Boston College, here are some differences between that 1994-95 season and now:

Krzyzewski’s surgery in 1994 was to repair a ruptured disk, and it generally takes six weeks to recover from that procedure. Back surgeries can be tricky, but the school estimates his recovery time to be just four weeks. Coach K is no young pup anymore, but if that prognosis holds up, that’s early February — just in time for the annual visit from rival North Carolina and more than enough time to prepare for a deep NCAA Tournament run.

The main lesson Krzyzewski learned was the importance of empowering his assistants. That wasn’t the case back then. Collins called the mid-1990s Krzyzewski “Mr. Everything” because he micromanaged virtually every aspect of a program he molded into a then-two-time national champion and perennial Final Four team. The current group is accustomed to hearing the voice of Capel — who won 175 games and reached three NCAA Tournaments in nine years at Virginia Commonwealth and Oklahoma, and who led Duke past Georgia Tech last year in the only road trip Krzyzewski has missed since 1995.

Krzyzewski has intimated that the big problem in 1994-95 wasn’t necessarily the surgery itself, but his premature comeback from it. This time, he says, “I’m hopefully smarter and not as bull-headed” as he was at age 47 for his surgery in October 1994. He only missed some of preseason practice before hurrying back to the team, and promptly found himself back in the hospital in January ‘95 with exhaustion. By the end of that month, he was gone and the team was in assistant Pete Gaudet’s hands. Now a month from his 70th birthday, Krzyzewski says this time he’s “got to let it happen and take my time.”

From staff and wire reports Weather concerns led to the  the postponement of several basketball games scheduled for Friday. The... read more