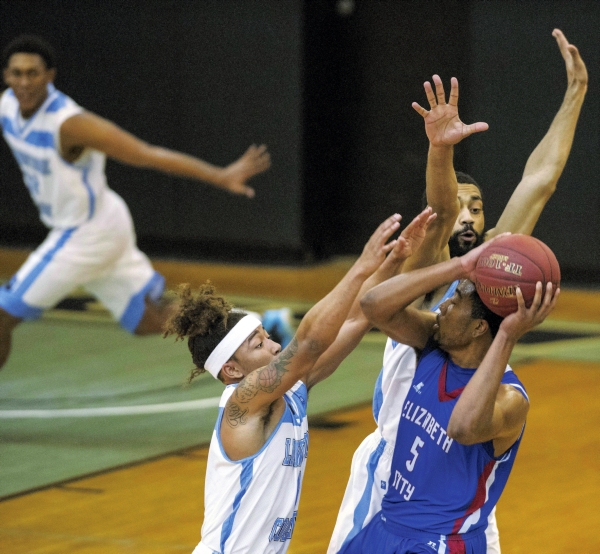 Trailing 60-56 with 4:40 left in the game, Livingstone coach James Stinson switched up his defense and began pressing and trapping the Vikings. The move seemed to surprise the visitors and steals at midcourt by Ramel Belfield and Roger Ray led to two straight layups by Emarri Bailey, tying the game at 4:18 on the clock.

“When we changed it up there, that definitely took them by surprise,” said Stinson. “That was big and the guys did a good job with that sequence.”

After the teams traded layups, the Livingstone defense again stepped up, and ECSU turned the ball over on a shot clock violation.  Post player David Duncan broke the tie with a layup at the 2:26-mark and his free throw 30 seconds later gave the Blue Bears a 65-62 advantage.

The Vikings’ Elon Edwards sank two free throws to pull his team within a point, but Belfield nailed a huge 3-pointer from the right corner with 1:12 left. That shot turned out to be the dagger that did in the Vikings.

Samuel McClendon dropped in two foul tosses with 39 seconds left for six-point lead and Ray made it 72-64 with two more free throws at the 14-second mark. ECSU took advantage of some Livingstone carelessness in the final seconds to chop the final margin down to four points.

That ending, in addition to 13 first-half turnovers (18 for the game), left Stinson not exactly elated about the victory.

“We’ll certainly take it, but I’m not jumping up and down, because our sporadic execution nearly cost us the game,” said Stinson. “This team is young and is definitely experiencing some growing pains.

“We we execute the game plan, we’re getting to where we want to be,” continued Stinson. “But if we come down on offense and try to go one-on-one, we’re not very good. Being a new group and being a young team, we tend to get away from the game plan when we see shades of success.”

Livingstone trailed at halftime, 37-33, thanks to the first-half turnovers. With just over four minutes left in the half, the Blue Bears led, 27-22. But unforced errors and missed shots by Livingstone led to a 15-8 Vikings’ run to close the half.

ECSU immediately pushed its lead to six points to start the second half, but four minutes later, a layup by Duncan tied the game at 41-41. Neither team had much more that a two-point margin until the Vikings rallied for the 60-55 lead — prior to Livingstone’s defensive heroics.

Livingstone shot 51 percent (28-of-56) for the game, led by Duncan’s 15 points. Darryl Bond came off the bench for 12 points and Jimmy Wilson had 10 points and nine rebounds.

The Vikings got 14 points each from Edwards, a former Catawba player, and Shyhied Petteway. Kyree Marshall added 13 points for ECSU.

Stinson added that the Vikings didn’t resemble a winless team. “They have some good players,” he said. “They’ve had some quality performances against some pretty decent teams. Like us, they are still trying to find the right chemistry.”

NOTES: Livingstone is missing two players who are injured, Eric Dortch-Jones and Desmond Stanback. Dortch-Jones was one of the team’s leading scorers early in the season, but broke a bone in his hand at Bowie State on Dec. 11. He is expected to miss the rest of the month. … Edwards, a quick guard, played at Catawba in 2012-14, before transferring to ECSU.