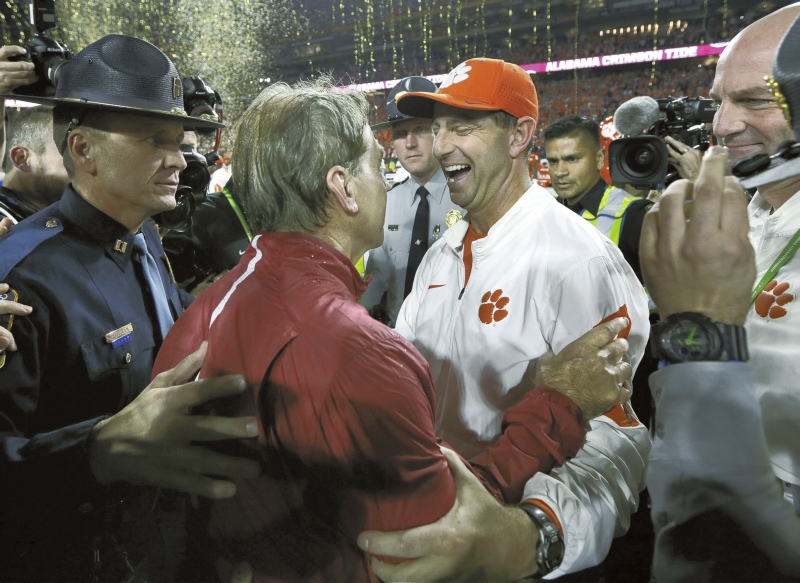 The same applies to sports.

So wish Alabama and Clemson plenty of luck as they go into the College Football Playoff championship game — because they’ve got a classic to try to recreate in Tampa, Florida on Monday night.

A year ago, Alabama beat Clemson 45-40 in a thriller. Here’s hoping this remake is more akin to “Godfather 2” than “Caddyshack 2.”

“You can best believe we’re going to show up,” Clemson coach Dabo Swinney said. “And we’re going to lay it all on the line and see if we can find a way to finish.”

This is the first time in the college football title-game era — first the Bowl Coalition, then the Bowl Alliance, then the Bowl Championship Series and now the CFP — that the same two teams got to the season’s final matchup.

It’s not exactly an everyday thing in other sports, either.

The NBA has had two rematches in the last three title series, and 14 overall. There have been 10 instances of the same two teams getting to the Stanley Cup final in successive years, though only one such occurrence since the early 1980s — simply put, dynasties were easier to form when there were fewer teams in the league.

Baseball hasn’t had a repeat World Series since the late 1970s, when the Yankees topped the Dodgers in consecutive years. There’s only been one rematch in Super Bowl history. And same goes for the NCAA men’s basketball tournament, with Cincinnati sweeping Ohio State in 1961 and 1962.

Here’s a look at some memorable championship rematches in recent years:

The Warriors blew a 3-1 lead in The Finals in 2016, losing two potential clinchers on their home floor, including Game 7. Golden State won the first matchup in 2015, though in fairness, the Cavaliers were so injury-decimated in that series, it seemed like LeBron James was taking on the world.

Not even close, either. The Spurs and Heat waged a classic in 2013, Miami needing that 3-pointer from Ray Allen with 5.2 seconds left in Game 6 to stave off elimination and then winning a brilliant Game 7. A year later, the Spurs were in total control and won in five games.

A very easy choice here. The Lakers needed seven games to topple the Pistons in 1988, getting James Worthy’s only triple-double to prevail in Game 7. A year later, the Pistons swept the Lakers in the final series for Kareem Abdul-Jabbar.

Which Was Better? The sequel, though neither was that good.

The first matchup on Jan. 31, 1993 (ending the 1992 season) was a 52-17 romp for Dallas . At least the one the following season was closer, Dallas prevailing 30-13. It marked the end of the four consecutive Super Bowl losses for Buffalo, which led at the half of the rematch before getting outscored 24-0 after intermission.

Connecticut capped a 40-0 season in the 2014 game, rolling to a 79-58 win. The Huskies were a touch more vulnerable a year later — they actually lost once that season — and had their lead cut to five with about seven minutes left before finishing off a 63-53 win.

The 2003 game might have been better, with UConn needing a pair of Ann Strother free throws in the final seconds to close out the Volunteers. But the stakes in 2004 were historic, since that game was played a night after UConn’s men also won the national title — and after Geno Auriemma’s women held off every Vols comeback try, they were able to give the Huskies a championship sweep.

The WNBA Finals were a best-of-three back then, and the Liberty sent the 1999 series to Game 3 when Teresa Weatherspoon — after Houston took the lead with 2.4 seconds left — banked in a 50-footer as time expired for an unbelievable win. But the Comets recovered to take that year’s title, then needed just two games to thwart the Liberty again the following year.

Landon Donovan had what became the game-winning goals in both matches. His score in 2011 , assisted by David Beckham and Robbie Keane, was the lone goal in a 1-0 Galaxy win.

Donovan’s game-winner in 2012 was a penalty kick, as the Galaxy prevailed 3-1.

Which Was Better? The original, though both were stellar.

Houston prevailed in 2006 in a penalty-kick tiebreaker, after falling behind in the 113th minute of what had been a scoreless marathon and knotting it up 71 seconds later on a goal by Brian Ching. The Dynamo erased a 1-0 deficit again a year later, winning on a golden goal from Dwayne De Rosario.