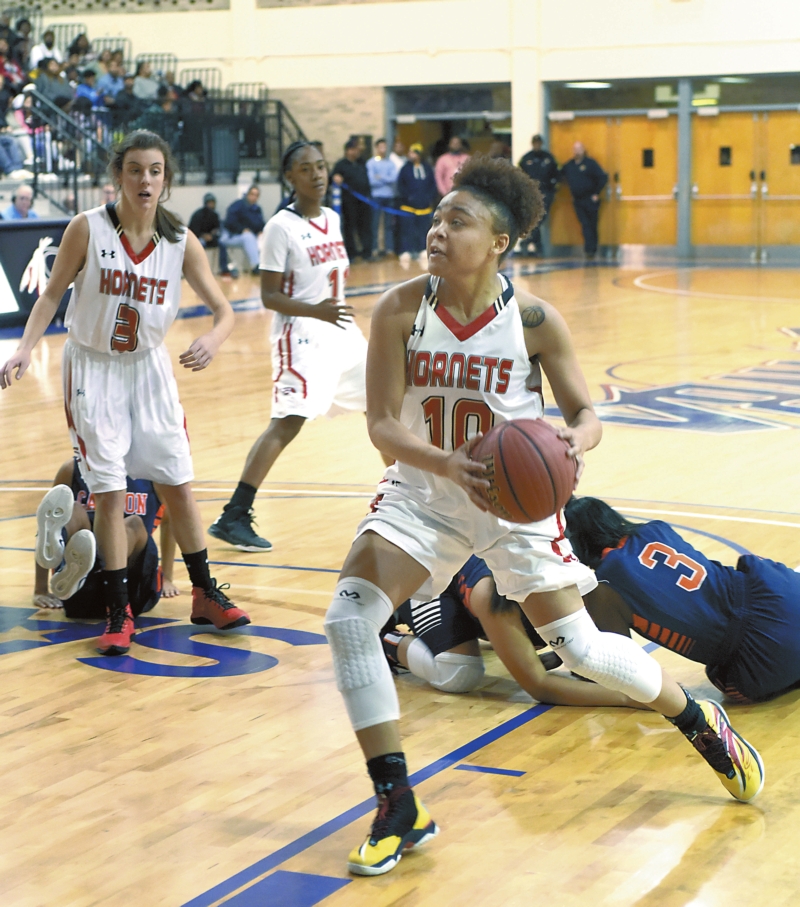 Wayne Hinshaw/for the Salisbury Post ... Salisbury’s Tyzarea Alexander leaves Carson players in her wake as she moves towards the basket during last night’s Dale’s/Sam Moir Christmas Classic girls championship game. Alexander was named MVP as the Hornets won the game, 73-60.

SALISBURY — Senior Tyzarea Alexander and fourth-year head  coach Lakai Brice came to Salisbury at the same time and their long upward journey continued on Friday with the championship of the Dale’s Sporting Goods Christmas Classic.

“All of us worked for this,” Brice said. “The staff and the girls. We took some beatings along the way, but  we always kept going. I’m so proud of these girls right now and so proud that they won such a great game.  They are champions. Tyzarea was a little shocked to be named MVP, but she’s earned it and she’s thrilled.”

It was a whale of a game for a long time. In the first half, Carson’s Anne Marie Turney and Maren Shumaker played out of their minds. They normally give the Cougars seven points a game. On this night, in a pressure-packed atmosphere, they had 18 — at halftime.

“We were struggling to score the entire game, but those two kept us in it for a half,” Carson coach Brooke Misenheimer said.

Reserve Jinika Glenn got the last two points of the first half to give the Hornets a 34-31 lead. Then  Brice, who had game-planned to contain Olivia Gabriel and McKenzie Gadson, headed for the locker room to talk about  Shumaker and Turney.

“The biggest thing was Carson was out-rebounding us,” Brice said. “They had two people scoring more than expected, but they were mostly second-chance points. We needed to rebound better to stop that, and in the third and fourth quarters we did. We also were  in foul trouble at halftime — every starter with two — and we talked about staying out of trouble in the second half.”

Top-seeded Salisbury (9-1) scores more easily than Carson. Carson didn’t allow a lot of layups in the first half, but the Hornets were making outside shots. Five different Hornets had at least five points at the break. Not unexpectedly, Capito had made two 3-pointers, but the big surprise was that Mariah Glenn also had made two. Carson had not anticipated Glenn taking, much less making, outside shots.

“I told her she had to be a threat and had to look at the basket,” Brice said. “And then when she made her first shot, you could see the confidence going up.”

Both coaching staffs knew the opening minutes of the third quarter were going to be critical. Both preached the importance of a forceful start.

It was the Hornets who took control.

“The coaches told us to make sure that the third quarter was our best quarter,” Alexander said.  “And it was. We jumped on them.”

Capito stroked a 3-pointer, her third of the night, to start the avalanche.  Gadson answered with a bucket for the second-seeded Cougars (11-3), but then it was Fulson getting two on  drive and then three more on a fortunate bank shot. Her 3-point banker put the Hornets up nine.

“They came out and they took all the momentum,” Misenheimer said.

Next came the game’s defining moment  — a Carson drive that Troutman swatted in the lane. She blocked  it so emphatically that it turned into a breakaway bucket by Alexander. Now the lead was 11, the first time the Hornets had been up by double digits.

“When she went up for that block, I was so afraid she’d foul,” Brice said. “But she got it clean.”

Carson was reeling, and Troutman, Alexander and Fulson were cleaning the boards. By the end of the third quarter, the Hornets led by 15.

When Gadson began the fourth quarter with a three-point play — the same sort of soaring effort that triggered Carson’s semifinal rally against West Rowan — Misenheimer allowed herself a glimmer of hope, but  then Alexander stepped forward. She scored the next three buckets, the lead was 18, and it was all over.

“All good teams have their runs,” Brice said. “And we were able to sustain that one.”

Salisbury’s lead would swell to 22 before Carson got a flurry of meaningless points at the end.

“We just struggled to defend them all night, and in their third quarter run it was our defense that led to our demise,” Misenheimer said. “We looked dog-tired. They were the aggressors. It was just a great job by Salisbury, and they beat us.”

Salisbury  defended Carson well, taking a cue from West Rowan and focusing on limiting Gabriel’s penetration and forcing the Cougars to fire 3-pointers. Carson  blasted away all night  from long range but never made one until Micah Furr swished a 3-ball late.

“We executed on defense,” Alexander said. “If we could stop Olivia from driving, we could beat them.”

Gabriel (17 points) and Gadson (14) were named to the all-tournament team, but it was the Hornets’ night. They took their first Christmas crown since the Brielle Blaire/Doreen Richardson days in 2011. Those Hornets also beat a good Carson team in the final.

Brice was 7-17 in each of her first two seasons at Salisbury. After adding Troutman, the Hornets moved up to 14-12 last season. Now they’ve added Fulson, and they may be ready to make statewide noise in 2A.

NOTES:  Gabriel also won the “Ronz” award for sportsmanship and dedication that goes to a member of the runner-up team. It’s given in honor of the late Ronnie Gallagher, Post sports editor for many years. Ronnie’s son, Mackie, and widow, Joan, presented the award to Gabriel.