Rowan County homicides on the rise in 2016 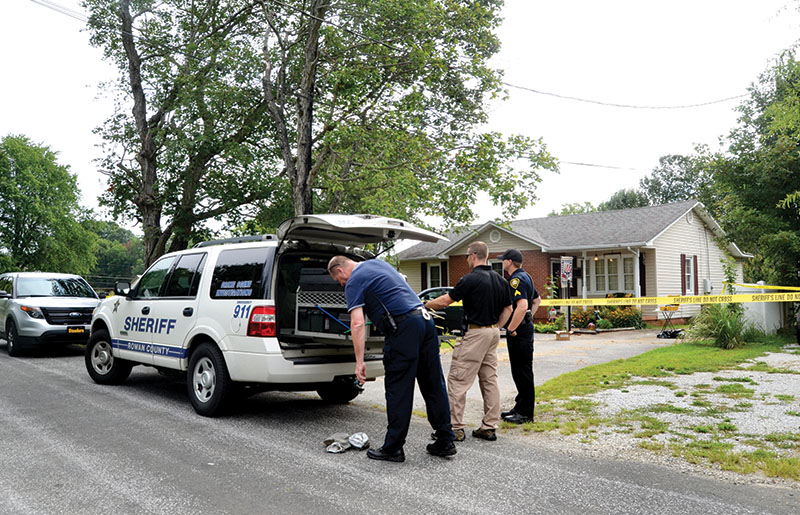 Shavonne Walker/Salisbury Post file photo On July 18, Rowan County Sheriff’s investigators look into the death of Joyce Trexler at this Ellis Loop Road home, off East Ridge Road, after receiving a 911 call from a man who said he tried to perform CPR, but was unsuccessful. Curtis Wayne Trexler, Joyce Trexler’s grandson, remains in the Rowan County Detention Center without bond in connection with the murder.

ROWAN COUNTY — Gun violence plagued Salisbury and Rowan County in 2016, leaving investigators to piece together evidence to determine who committed the crimes and why. Investigators have spent countless hours interviewing, collecting evidence and working to learn who killed these men, women and children.

The Rowan County Sheriff’s Office investigated five murders this year, all of which have resulted in arrests. In one incident, the case has since been dismissed after the grand jury did not believe there was probable cause to proceed further.

The Salisbury Police have investigated 10 homicides this year; three of them have been solved, with suspects arrested.

Here’s a summary of the homicides in both the county and city from January to December:

Crowder was found shot to death inside a 1991 Honda that belonged to her ex-boyfriend, Brandon Jerron Hawkins. He was charged with her murder less than 24 hours after she was discovered.

Crowder, a Pfeiffer University junior, was reported missing by her mother. Salisbury Police received information that a Honda Accord connected to the missing teen was in the area of Park Avenue and Long Street. Police located the vehicle in a parking lot at 311 N. Long St., the site of a group of apartments.

Hawkins, 21, was also charged with larceny of a firearm and remains in the Rowan County Detention Center without bond. The district attorney will proceed with the matter as a non-capital case.

McGee and his brother, Antoine Terrell McGee, were found in a field behind the Legion building after a party. Both had been shot and were flown to a Winston-Salem hospital where Devon McGee died.

Salisbury Police say they were initially called to the location at 1:44 a.m. in reference to a fight at a party. While police were on their way, they received information that someone had been shot at the location. No arrest has been made in this case.

On April 3, the Salisbury Fire Department was called to an apartment at 632 Hamilton Drive for a structure fire. Joseph Walker was found dead in the apartment, stabbed in the chest, neck and face. Neighbors told investigators they had seen Walker go into his apartment with an Asian man who appeared to be in his 20s. Walker’s mother told police her son had a friend named Chris who matched that description.

Christopher Brandon Washburn, 26, also known as Jin Soo or Jyn, was located at his home in Greensboro and arrested on June 16 on charges of first-degree arson and murder.

Walker, an Iraq War veteran, had lived in Salisbury for only a short time and served in the U.S. Air Force from 2000 to 2007. He’d been working for Delhaize Group and moved to the area for the job.

Salisbury Police received a call at 3:39 a.m. for shots fired in the area of North Martin Luther King Avenue and East Council Street. Upon arrival, officers found a 2006 Chevrolet that had crashed into a wooden fence in the side yard of 200 N. Martin Luther King Ave. Police said Cruse was found inside the vehicle, shot dead. Cruse, a Salisbury native and former Salisbury High student, had just had his fourth child.

No arrest has been made in Cruse’s case.

Hepler was found lying in the floor of the living room of his father’s mobile home, just a few yards from his own mobile home at 139 Cone Drive. He had several stab wounds to his chest.

Rowan County investigators said two women lived with Hepler — Satonia Yvette Gray and a woman named Stephanie. Hepler made Gray mad, the two argued, and at some point Gray attacked Hepler. He managed to walk next door to his parent’s home and  call 911 for help.

Gray, 25, was found at a Mocksville apartment complex about five hours after the incident and was charged with murder. Gray was seen in the mobile home park after the attack wielding a knife in her hand, but she’d left before law enforcement arrived on the scene. Gray still had on bloody clothes when they found her and she confessed to killing Hepler, Rowan officials have said. Investigators also said there was no romantic relationship between Hepler and Gray.

The Rowan District Attorney’s Office will proceed with this matter as a non-capital murder case. Gray remains in the Rowan County Detention Center without bond.

Salisbury Police responded to the Crown Point Drive apartment complex in reference to a robbery; while en route they heard a Hispanic man and black woman had entered the apartment demanding money, and a woman had been shot.

When police arrived at the apartment, located off Gold Hill Road in the Morlan Park neighborhood, they found Feimster lying inside a downstairs bedroom bleeding from the head. Her mother, Mary Gregory, had been hit in the face with a gun. She was taken to the hospital, where she was treated and released.

Sindy Lina Abbitt, 33, and Daniel Real Albarran, 31, were charged with first-degree murder, felony attempted robbery with a dangerous weapon and misdemeanor assault with a deadly weapon. Investigators said Abbitt turned herself in to authorities in mid-June. Police had said Feimster and Abbitt knew each other, but said little about the connection to Albarran.

Feimster, who was known by the nickname “L.C.,” was a longtime waitress at O’Charley’s.

Both Albarran and Abbitt remain in the Rowan County Detention Center without bond.

Smith was murdered and her partially burned body found on Leonard Road, around the same time firefighters were called to her mobile home, miles away. A passerby on Leonard Road saw the body and called 911. The Sheriff’s Office investigated the crime.

Two days later, Timothy Smith Jr. and girlfriend Stephanie Dawn Hall were arrested after crashing a stolen car in Horry County, S.C. Investigators said Timothy Smith and Amanda Smith are not related, but the victim was acquainted with him and Hall.

Rowan authorities say the suspects took $400 in cash and bank cards from the victim, dumped her nude burned body in a ditch, then returned to her mobile home and set it on fire. She had trauma to her head and was murdered in the early morning hours of June 17, a warrant said.

Both Hall, 31, and Smith, 30, remain in the Rowan County Detention Center under no bond.

Rowan investigators went to Joyce Trexler’s Ellis Loop Road home after the county’s 911 center received a call from someone frantically asking for help. Authorities said Curtis Trexler, the woman’s grandson, made that call, and said his grandmother appeared to have been brutally murdered. Investigators believed Joyce Trexler was assaulted in her bedroom, made her way into the kitchen, was hit again and died there.

Investigators learned Curtis Trexler was a heroin user who went to a methodone clinic in Salisbury for treatment. His drug abuse had been a concern of his family for several years. About three weeks before the death, Curtis Trexler used a Walmart credit card that he’d acquired in his grandmother’s name to buy a PlayStation 4.

Salisbury Police responded to Zion Hills Apartment complex in response to a “shots fired” call that came in just before 8:30 a.m. Police found Burke, dead, just beyond the tree line behind the complex, near a playground.

It’s believed that Burke may have cut through a wooded area on a path leading to another apartment complex on Linn Lane, off Old Wilkesboro Road. Neighbors said Burke would have had to get past lots of trees and a creek before emerging on the other side. Burke grew up in Salisbury and attended Salisbury schools.

The Rowan County Sheriff’s Office responded to 5985 Foster Road just after 2 a.m. to a “possible shooting.” Deputies found Dewey Gray lying in his driveway. Gray told deputies he’d been shot by a man he knew by the nickname Booker. Gray was treated by Rowan EMS at the scene and flown to Wake Forest Baptist Medical Center, where he later died.

The man who authorities said shot Gray, was family friend James “Booker” Leonard Ross Stewart, 21, who lived in a camper behind his mother’s home at 5075 Foster Road. Authorities said Leonard shot Gray in the chest following an argument. Gray drove himself home, just a short distance down the road. While investigators were looking into the shooting they discovered several “one pot” meth labs outside the home.

When the case went before the grand jury in September, the grand jury did not return a true bill of indictment, meaning there is no probable cause to decide that a crime has been committed. The charges regarding the meth lab remain in place.

Hall, 38, was found by her partner and sister-in-law Melissa Cross at the home the two planned to move back in to. The rental had been damaged in July when a tree fell on it. Cross said Hall had driven from Spencer to the Salisbury home. Cross became concerned when she called Hall and heard a rustling sound in the background. When Cross got to the house, Hall was lying in the front yard with a gunshot wound.

Salisbury Police responded to the bar just after 1 a.m. on a Sunday and found someone had shot Mathis in the parking lot. He was taken to a local hospital by a private car and later died of his injuries. Police said there was an altercation prior to the shooting.

Just three hours later, someone riddled the Harrel Street home with bullets. Several of those bullets struck 7-year-old A’yanna, killing her. The girl was asleep in a bedroom that she was sharing with grandmother Shirley Robinson. The grandmother was shot in the leg.

Police have since said the murders are connected. A woman, Savannah Maria Queen, was charged with obstruction of justice after police say she lied to them about a firearm at the scene. She removed that firearm from the scene, warrants said.

No other arrests have been made in either case.

Rowan County investigators received a call regarding a shooting in the street in front of 504 Carter St. The caller said they saw a tan-colored station wagon pull up to Rumple. The caller heard three shots and the vehicle sped away.

Authorities issued a bulletin, and a China Grove officer spotted the vehicle on Interstate 85 near Webb Road. Court records say when the officer approached the vehicle he could see the barrel of a revolver sticking out from under the driver’s seat. The officer asked the occupants where they were coming from and they said Charlotte. The men were later identified as Jai Wontreal Winchester and Jahari Shaheed Rustin. A clear plastic bag with five hydrocodone pills were found in the car.

Warrants said Winchester admitted that he and Rustin met Rumple at his house to collect a drug debt Rumple owed them. Winchester, 21, and Rustin, 20, were charged in the death and both remain in the Rowan County Detention Center without bond. The men are expected to appear in district court Feb. 1.

Few details have been released in the shooting death of Albert Shelton. Salisbury Police said the call came in as someone who was not breathing. It was believed the person was under cardiac arrest. But once medics began uncovering layers of clothing that Shelton was wearing, they found he was bleeding from a gunshot wound. Police have said this shooting was not a random crime.