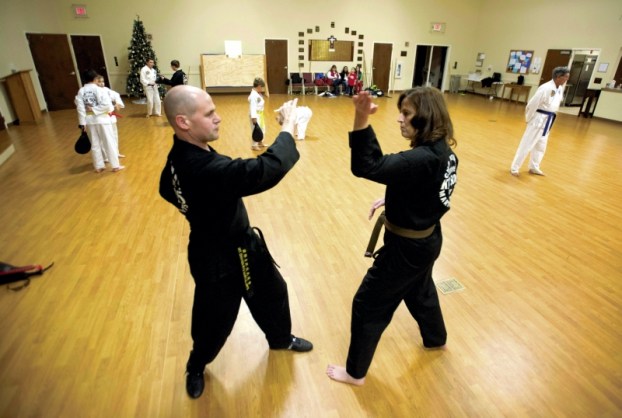 LANDIS — The Rev. Jarrod Lanning stands in the middle of the gym at Trinity Lutheran Church, but he’s not wearing a clerical collar. Instead, he’s attired in a black martial arts uniform.

He claps his hands together.

“Let’s line up!” he says, to the students in his class.

On Sunday and Tuesday nights, Lanning teaches a Cha Yon Ryu class. It’s a form of martial arts that teaches self-defense based on the body’s natural motions, he says. “So anyone of any age can do it,” he says.

And it’s true, as Lanning’s class consists of boys ages 7 and up as well as a handful of students over age 50.

This particular form of martial arts was developed by Grand Master Kim Soo in 1968, who still teaches in Houston. The class includes the typical uniform, the belt progression, the board breaking, the whole nine yards, as Lanning says. But it also teaches values and respect.

Dinah Brafford of China Grove has been taking the class for almost six years. She’s financial secretary at Corriher-Lipe Middle School, located next door to Trinity.

“I took the first class and didn’t stop,” says Dinah, tall and trim in an all-black uniform.

Brafford took karate as a middle-schooler with Gary Basinger in Spencer, so the concept was familiar to her. She wanted to finish what she started as a youth, she says.

“I just love the art,” she says. “I love working with Jarrod. He’s a wonderful teacher. This gives me mental focus, sharpness and agility.”

Brafford will soon have a brown belt with a stripe, one step below the black belt level, Lanning notes.

“It makes you walk taller and really builds your self-confidence,” Brafford adds.

Ann O’Kelley of China Grove and her daughter, Olivia, now 16, have been taking the class since it was first offered.

“I was bound and determined that my children would be able to take care of themselves,” says Ann, who also has an older son, Joseph, with her husband, Rick.

O’Kelley says that the class has brought out a competitive spirit in her and her daughter.

“Girls weren’t supposed to be like that, growing up,” O’Kelley says. “This class has increased my self-confidence, just knowing the little things I can do to take care of myself.”

O’Kelley often works nights as a pediatric ICU nurse at CMC-NorthEast. “I would like all of my co-workers to know what I have learned, because we leave at all hours of the night.”

O’Kelley, a former runner, says she feels stronger. “You know what your body can do, and it’s pretty amazing. It’s a great workout, and it’s something that Olivia and I can do together.”

Harold Pike of China Grove has been taking the class for 4½ years, since he turned 65.

“I’m a fan of moving forward,” he says, “and my daughter and grandson were taking. It’s not anything like I thought it would be. It is as much mental as physical, and it equips you for life.”

Pike repeats the pledge that students state at the beginning of every class: Seek perfection of character. Live the way of truth. Endeavor. Be Faithful. Respect others. Refrain from violent behavior.

“That’s a way of life,” Pike says. “If everybody followed those rules, don’t you think the world would be a whole lot better?

“It’s not only compatible with Christian faith, but with any faith,” Lanning says.

“I always had a Christian base and a good attitude,” Pike says. “I see our younger students grow and I see the values that are taught. It encourages you to put your best foot forward and stick to it. I’d say I’m stronger, and I feel more confident.”

The Rev. Carlin Ours has been taking the class for 3½ years, after Lanning invited him to give it a try.

“I love the learning and the fellowship,” says Ours, pastor of Organ Lutheran Church. “It has helped me physically because my job is more sedentary than others. It’s helped with my breathing and flexibility. Mentally, it keeps me focused, and this is a good place to get away from my daily responsibilities.”

Ours hopes to start a doctoral program in 2017 in pastoral counseling. He plans to incorporate this class into his specialization area of post-traumatic stress disorder.

For Brafford, she says, “I want to advance as far as I can, and I want to help Jarrod continue the class.”

Ours has a blue belt rank — way down the totem pole, he says — while Pike wears a purple belt with stripe.

“It doesn’t matter where you are in rank,” Brafford says. “We can all help each other.”

SALISBURY – Steve Setzer was not planning on moving his business, Strategic Moves Aircraft Management, to Salisbury. It took... read more