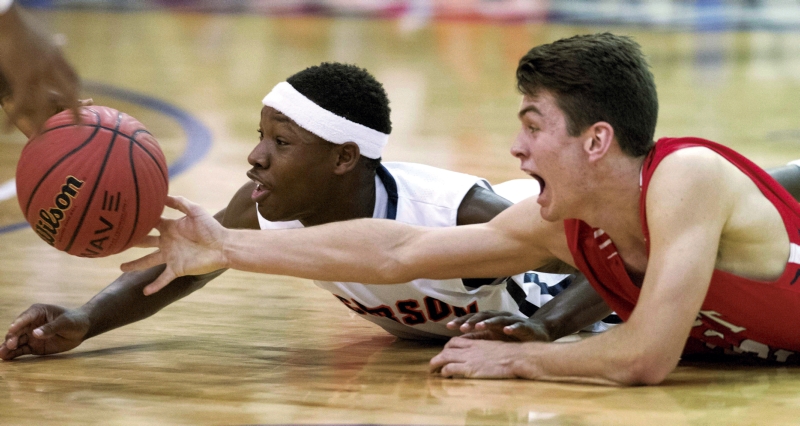 The Mustangs (1-10) could not get the ball into the basket in the first half and it didn’t matter if it was a layup or 3-point jump shot. East made just 3-of-23 shots (13 percent) from the floor in the first 16 minutes, scoring but five points in each of the first two quarters.

Williams, a 5-9 junior, didn’t miss a shot in the first half, scoring eight of his 14 points.

And while Carson made less 3-pointers (six) than it normally does, the East Rowan missed shots and 16 turnovers led to some easy fast-break baskets for the Cougars.

“First round … early game, energy is always hard to come by … and getting used to the bigger gym, I’m happy with how we played,” said Carson coach Brian Perry. “It didn’t feel like we shot it great, but we did a good job at defending East in the first half and cleaning the glass up pretty good on their misses. And we’re always better when we get a stop and get out in transition. We got some easy shots when we got stops on the other end.”

Only a better third period (14 points) for the Mustangs kept the game from getting really ugly. The Mustangs made 6-of-18 shots in that period, including 3-pointers from Lucas Morton and Gabe Hinceman.

East actually had a 9-0 run in the third period, taking the deficit from 39-12 to 39-21, but Carson’s Cole Sifford buried a 3-pointer to get the Cougars back on track.

With Cole Perry scoring nine second-half points (14 for the game), and A.J. Banks and Jamarius Hairston controlling the inside, the Cougars quickly jacked the score back up to 22 points, midway through the final period.

“I didn’t think Carson played as well as it can, but you can beat any team that can’t make layups and scores just 34 points in a game — and 10 in a half,” said disappointed East coach Kurt Misenheimer. “The last time we played them, they shot lights out. We contested better today and we boxed out better inside, but again, when you don’t make easy shots and don’t get it going on the offensive end, you’re not going to win a basketball game.”

Hairston followed Perry and Williams in the Carson scoring with 11 points. Williams also led the Cougars with eight rebounds. Banks had six rebounds and five points. “Jailen did a great job at penetrating and getting to the rim and Cole ran the lane a few times and got some easy ones,” said Coach Perry. “Banks did a great job on the offensive glass and got us some opportunities.”

Carson made 49 percent of its shots (25-for-51). East also had 51 attempts from the floor, but made just 13. The foul line was not really a factor for either team.

Carson plays in the semifinals today at 4:30, against Mooresville, a winner over Davie County in a close game. “I watched Mooresville’s game and they looked really good, so it should be a tough game,” said Coach Perry.

East falls into the consolation bracket and faces Davie County at 10:30 a.m. today.

“We missed so many shots that it affects your defense, when you get your head down, and you pout and sulk,” added Misenheimer. “Good offense can usually help your attitude on defense. We have a very young team but that was a winnable game, or at least, a chance to be ‘in’ the game. Being young is no excuse for that kind of output. There’s no easy answer to it … we’ve just got to keep working.”

NOTES: Carson’s Owen White scored just five points before fouling out just two minutes into the fourth quarter. One of the officials ruled that White hung on the basket on a follow shot and whistled a technical foul, which became his fifth personal foul. … Carson junior guard Cameron Prugh, a usual starter, is sidelined with an illness and is not expected to play in the tournament. … East inside player Elton Hooper, a 6-6 sophomore, grabbed six rebounds but did not score.