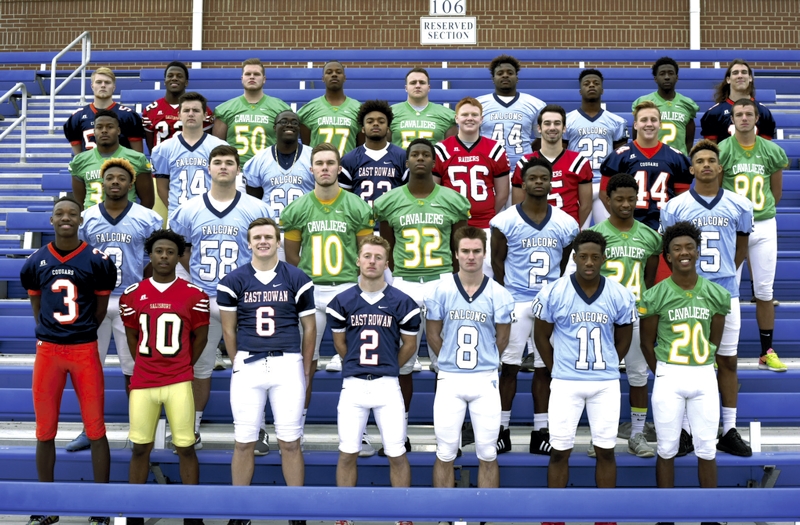 SALISBURY — The 2016 football season in Rowan County included one of the best receiving seasons in county history, two of the top 17 individual passing seasons and three of the top 30 rushing performances.
Team-wise, it was a season dominated by co-county champs West Rowan and North Rowan. Both were spotless against county opposition, both posted double-digit win totals and both reached the third round of the state playoffs. All that was missing was going head-to-head against each other in what would’ve been the biggest game of the season.
West beat South Piedmont champ Robinson and perennial state champ Crest on its way to a 10-4 mark. North ran the table in the Central Carolina Conference for the third time in four seasons and won a playoff road game to put an 11-3 season in the books.
Not surprisingly, the all-county team is dominated by West blue and North green. They have 10 all-county players apiece, and they also have guys who lead the second team. North offensive lineman Terry Cathcart and defensive lineman Matthew Hoosier and West DB Malcolm Ingram and West defensive lineman Tyler Wheeler were among the hardest guys to leave off the first team.
The remainder of the all-county team first includes four players each from Carson and East Rowan — appropriate since they won four games apiece — and two each from Salisbury and South Rowan. In a perfect world, the three-win Hornets should’ve gotten three guys on the first team, but two of the stoutest Hornets, back Cameron Horne and DB Tyvion Wood, played positions where the county was deepest.
Last year’s all-county team included a long snapper for the first time. This year’s team includes two-way players for the first time. If you saw an East Rowan game, it was obvious that Wesley Porter, a three-time All-South Piedmont Conference player, was one of the Mustangs’ best two players. But it’s hard to pigeon-hole Porter. He was very valuable on special teams, offense and defense.
There were two ties — at quarterback and the fourth defensive back spot.
Coaches helped with nominations and advice. The Post sports staff made the final picks.

Quarterbacks
This may have been the closest QB competition in history, so both needed to be on the squad. West’s Payne Stolsworth was the county’s highest-rated passer with a 51-percent completion rate, 2,034 passing yards, 25 touchdowns and eight interceptions. North’s Corbin Smith passed for 1,882 yards and 21 TDs. He had a lot more interceptions (15) than Stolsworth, but he evened things up on the ground with 252 rushing yards and four TDs.

Running backs
East’s Max Wall ended up as the No. 7 career rusher in county history, topping 4,000 yards. Wall had 1,373 rushing yards this season. With the benefit of playing 14 games to Wall’s 12, North’s Jaleel Webster (1,466) and West’s Jovon Quarles (1.484) had even more rushing yards. Wall and Webster posted 300-yard games — rarities in county history — while Quarles led the county with 17 rushing TDs.

Receivers
Kortez Weeks, the county’s offensive player of the year, turned in a record-breaking season with 67 catches, 1,307 yards and 19 TDs. Next best was North’s Alonzo Sirleaf, a strong blocker who had 39 catches for 534 yards and seven scores.

Offensive line
West tackle Avery Allen and guard Javon Lofton opened holes for Quarles and protected Stolsworth, while North center Will Anthony and guard Taelor Davis paved the way for Webster and kept rushers away from Smith. The fifth o-lineman is South tackle Patrick Brooks. His best game was against Carson in South’s lone victory.

Offensive Athlete
South’s Austin Chrismon was the Raiders’ best player and the team’s only All-SPC pick.

Defensive line
North Rowan defensive end Zion DeBose had 20 sacks and is the county’s top college prospect. North Rowan’s Steven Thurston had more than 100 tackles, which is unheard of for a nose guard. West Rowan tackle Devin Turner was a terror just about every Friday.

Linebackers
West’s L.J. Robinson had two pick-sixes and averaged 16 tackles per game. North’s Javin Goodine also topped 100 tackles and was the vocal and cerebral leader for the Cavaliers. Tywun Rivens was a sure tackler and arguably Salisbury’s best player. As a sophomore, Christian Bennett became the focal point and leader of East’s defense.

Defensive backs
West’s Deyuan Byrd made nine interceptions, one of the top figures in school and county history. Paris Hillie had five picks and was outstanding in the stretch run for the Falcons. Corner Brenden Westbrook (five interceptions) and safety Andrew Jerman were two of Carson’s three All-SPC players. North’s Brandon Clodfelter picked off four passes, took one back for a TD and blocked a field goal.

Defensive athlete
West’s Brandon Wallace plays a hybrid position in which he’s asked to stop the run and also to drop into pass coverage. He was second on the team in tackles.

All-county soccer: South’s Corriher was a beast in goal