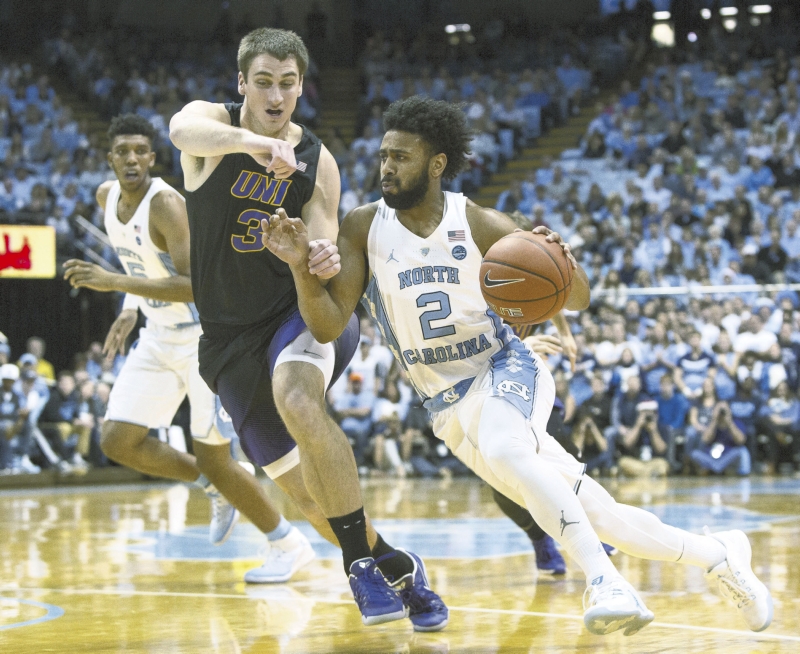 CHAPEL HILL (AP) — Once Kennedy Meeks got going for No. 8 North Carolina, nothing could stop him. Northern Iowa certainly couldn’t.

Meeks scored 10 of his 18 points during the Tar Heels’ dominant second half, leading them past the Panthers 85-42 on Wednesday night.

“He was the difference in the game,” Hall of Fame coach Roy Williams said.

They shot 52 percent — hitting 62 percent of their shots in the second half while outscoring Northern Iowa 52-16 — and established a 42-24 rebounding advantage to bounce back from a 103-100 loss to No. 6 Kentucky last weekend. North Carolina scored 20 points off Northern Iowa’s 17 turnovers while giving it away only five times.

Bennett Koch scored 10 points before fouling out with 7:19 left for the Panthers (5-6), who have lost two straight and six of eight.

A big reason for that was Meeks, who said he caught an earful from Williams after Klint Carlson reeled off five consecutive points and it “woke me up a little bit.”

Northern Iowa: The Panthers returned only one starter from the team that knocked off the then-top-ranked Tar Heels 13 months ago, but they kept the script the same — relying on 3-point shooting, and all but ignoring the offensive glass. Northern Iowa made 11 3s and grabbed only four offensive rebounds last year, but this time the Panthers were just 1 of 15 from 3-point range in the second half and didn’t grab their first offensive board until about 12 1/2 minutes remained.

“Just gave up too many offensive rebounds,” said Jeremy Morgan, the team’s lone returning starter. “You’ve got a good team like this, you can only afford to give them one opportunity, and we gave them too many second chances.”

North Carolina: Meeks controlled the paint all night long for the Tar Heels, and wound up with his highest-scoring game against a Division I opponent this season. His season high of 20 points came against Division II Chaminade last month in the Maui Invitational.

“That was just me definitely trying to be more assertive, trying to come out on the defensive end first — not worrying about scoring or getting rebounds or anything like that,” Meeks said. “Just flat-out trying to defend the best way I could, and I think I definitely did that in the second half.”

North Carolina’s Theo Pinson was in uniform but was not available to play — and was even wearing glasses with his warmups — as he continues his recovery after breaking his foot in October. Williams said a CT scan “looked good” and he has been approved for “basketball-type activities.” Williams says he doesn’t have a date in mind for his return but added that “I think it’s going to be closer to 12 weeks” — which would be in mid-January.

Northern Iowa shot 33 percent. The Panthers are 5-0 when shooting 40 percent or better, and 0-6 when they’re at 39 percent or worse.

North Carolina: Plays host to Monmouth on Dec. 28 in its final nonconference game.