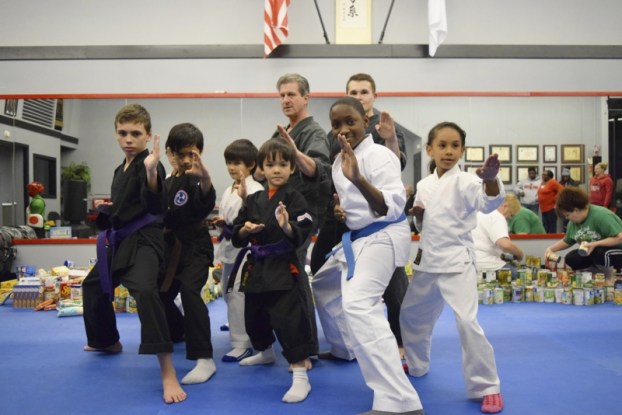 Jarrell Imes, front second from right, 12, had a goal of filling ten backpacks of food to send home with hungry students at Granite Quarry Elementary. He received help from local businesses, Erwin Middle School and his fellow students at Sidekick Karate in Salisbury, pictured here. On Tuesday night, the class got together and sorted more than 1,000 items and filled 40 backpacks with food. Rebecca Rider/Salisbury Post Jarrell Imes, 12, decided to collect food after learning that many kids at his former elementary school may being going hungry over the holidays. Rebecca Rider/Salisbury Post

SALISBURY — Jarrell Imes is a 12-year-old who’s been wrestling with a big problem. Several weeks ago, his mother, Eulanda Carr-Imes, told him about the local backpack program that sends bags of food home with children in need every Friday. Carr-Imes also told him that many children in the area only eat when they’re provided breakfast and lunch at school.

It didn’t take Jarrell long to put two and two together.

With the Christmas holiday approaching and school letting out on a Wednesday, instead of a Friday, many children may not be receiving the backpacks they need, and may not have enough food to last the week-and-a-half  break.

“I didn’t want the kids to be hungry this week,” Jarrell said.

So he got to work. Jarrell approached administration at Erwin Middle School, where he attends school in the seventh grade, along with his karate school — Sidekick Karate on West Innes Street — and asked for donations.

And the support came pouring in.

Erwin Middle collected approximately 1,100 items of food in a single day. Assistant Principal Jessica Allen sent out a notice Friday asking for donations, and Monday morning, cans of food and other non-perishables quickly piled up under an office Christmas tree.

“It’s amazing how everyone is just giving for this cause,” she said.

Tuesday night Sidekick Karate was a whirlwind of activity. After classes finished up, students raced around, grabbing cans that had been piled high in the windows and stacking them on the blue mat in the center of the room. Jarrell has been taking classes at Sidekick for two years, earning his blue belt.

“I said, ‘Let’s get behind him, support him, see what we can do,’ …There’s a lot of love in a karate school,” Ricky Smith, owner and operator of Sidekick, said.

Karate teaches self-defense, but it also teaches students to respect themselves and to respect others, Smith said. It’s one message Jarrell said he was trying to get across with the food drive — he may know martial arts, but there’s more to him than that.

Jarrell planned on filling 10 backpacks to give to students at Granite Quarry Elementary — but Monday changed that. Tuesday night, the group planned to pack 40 backpacks, and Carr-Imes already donated extra canned goods to Overton Elementary. Any extra food left over from Tuesday will go to a local church or organization, she said.

Right now, things aren’t easy in Jarrell’s family, either — he cited his father’s recent surgery as a struggle they were going through. But that only strengthened his resolve.

“Even through we’re in need, we need to help people in worse need,” he said.

And while Jarrell’s Joyful Giving, as the family calls the donation, was inspired by the Christmas season, Jarrell said he plans to keep it up year-round, if he can.

More than 800 ‘Cards for a Cause’ go to service members