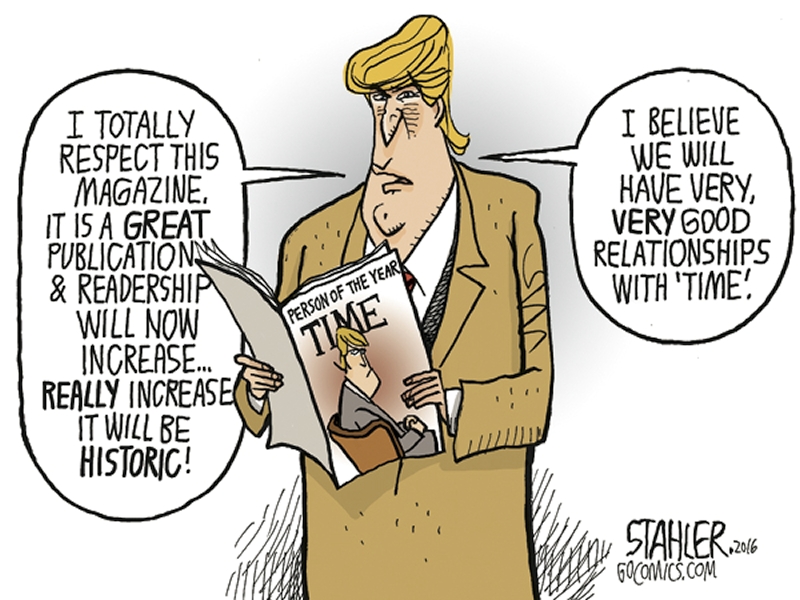 Donald Trump has many supporters and, apart from the alt-right, neo-Nazi types, they deserve respect.

But even his supporters must hope — as must his opponents — that as Trump assumes the most powerful office in the world, he will find ways to control his petty vindictiveness, arrogance, lack of conviction, narcissism and anti-intellectualism, all very dangerous traits for the occupant of the White House.

The two most worrisome traits on this list go hand in hand: arrogance and anti-intellectualism. Trump’s disdain for ideas, facts, deliberation and information is complemented by his confidence in his own intellectual capacity.

“I know more about ISIS than the generals do. Believe me.”

“I think nobody knows more about taxes than I do, maybe in the history of the world.”

“I know more about renewables than any human being on earth.”

“Nobody knows more about debt. I’m like the king.”

“Nobody knows banking better than I do.”

This abridged list helps explain why Trump could announce at the Republican convention: “I alone can fix it.”

Fortunately, in domestic affairs, at least, Trump’s undue self-assurance may be somewhat restrained by our democratic processes.

But foreign affairs are infinitely complex, and the president’s powers to act are more expansive. Every move and statement call for strategic deliberation and the counsel of experts. Someone who thinks he knows more than everyone else is dangerous.

Thus, Trump’s criticism of the CIA and his refusal to receive daily intelligence briefings are disturbing. But, he says, he doesn’t need them: “I don’t have to be told — you know, I’m, like, a smart person.”

The president-elect has already taken several ill-advised steps in the area of foreign affairs, while ignoring the collective wisdom of past administrations and experts. The most alarming may be his acceptance of a congratulatory phone call from Tsai Ing-wen, the president of Taiwan.

We’d be happy to see a free, democratic nation on the island of Taiwan, but China sees this issue very differently, and all presidents since Richard Nixon have accepted the practical, realistic fact of a one-China policy.

By way of comparison: Some of my fellow Texans occasionally agitate for my home state to secede from the union. Should this ever happen, imagine the consternation in Washington if the president of China placed a congratulatory phone call to the new president of Texas.

Maybe we need to take a tougher stance with China, but many experts who understand our complicated relationship with the world’s biggest country say that the phone call was imprudent and dangerous. And you don’t have to be an expert to understand that nothing is to be gained by picking at a scab left over from a wound that occurred during the Cold War.

How did we elect a man with such little regard for perspectives other than his own?

A revealing anecdote: This semester the election came up for discussion more than once during my freshman writing class. One older student of some experience — he’d been in the Army — was a firm supporter of Donald Trump and took considerable pleasure in his victory.

Recently I asked him what he thought about Trump’s phone call with Taiwan. “What’s Taiwan,” he asked.

I do not suggest that Trump supporters are more ignorant of world affairs than average Americans. But Trump’s lack of interest in the subtleties of complex international issues is a quality many Americans can identify with.

Real wisdom requires understanding that you don’t know everything, and it involves consistently questioning what you think you know. Unfortunately, it’s a habit of mind ordinarily acquired early in life; Trump will have a difficult time learning it at this point.