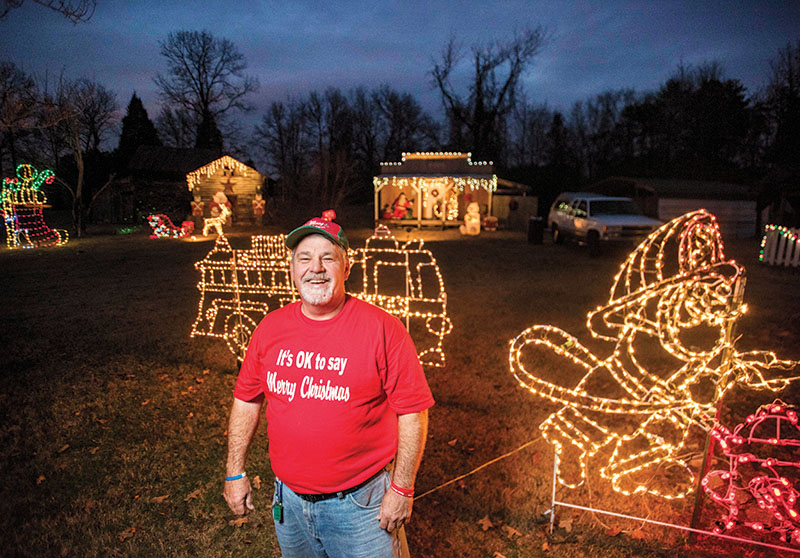 Randall Barger, shown here in 2016, enjoys spreading the Christmas cheer by putting out his display of Christmas lights at his home in Faith. JON C. LAKEY / SALISBURY POST

FAITH – Once Randall Barger flips on his Christmas lights, it takes about 30 seconds for a car to turn onto the long driveway off Faith Road. The house, officially located at 185 Deal St., Faith, attracts a lot of attention.

Barger, who by day works as the manager at the Rowan County Fairgrounds, utilizes the long driveway and two ponds on his property to create a Christmas display that’s wowed the county for more than 20 years.

“It doesn’t matter where I go,” Barger said, “people say, ‘Oh you’re from Faith? Do you know the guy with the Christmas lights?’”

Barger will smile, laugh and reply, “’Yeah, I know him.’”

But it wasn’t always that way. When Barger and his family moved into the house in 1994, he put up a few displays, but kept it modest.

But soon after, Barger stumbled upon a windfall that changed everything. He got a phone call.

An acquaintance, someone Barger had purchased Christmas displays from previously, operated a shop selling lights and displays between Boone and Blowing Rock. Soon after Barger moved to Deal Street, he called to say he was going out of business.

“I’ll sell you everything I got,” he told Barger.

At a steal price of about $1,500, Barger couldn’t refuse. If he’d had to buy each set individually, at full price, it could have cost him up to $10,000 in frames alone, never mind the lights.

So Barger drove up to the mountains, loaded up his trailer and the rest is history. For the past 20 years, Barger starts setting up shop at the beginning of November. He wraps trees, sets up Christmas trees, positions Rudolph to peek through the barn loft door and, once upon a time, waded out into the pond to set up lights over the water.

It’s a lot of work, taking the 61 year-old about a week, on average. Each display can take as long as two hours to piece together.

“It’s time consuming, but it’s also rewarding to know what the end results are,” he said.

On average, Barger said, his electricity bill for the month is $300 — but before the advent of LED lights, it could climb as high as $500 or $600. But even though technology has advanced, Barger said he’s probably got several miles of electrical wiring on his property.

It’s a lot, but to Barger, it’s worth it. As the cars roll down the drive under the canopy of lights, many stop to chat with Barger. People come from Faith, from Salisbury and a few come from farther away — a man pauses to introduce his girlfriend, visiting from England.

Most ask, “Is this your house?”

When Barger says it is, they say, “It’s amazing.”

And children, visiting year after year, remember old displays and mark which ones are missing, even as they marvel over the new ones.

“It does make you feel good,” he said.

The looping drive ends with Barger’s favorite display and a reminder of the origins of the holiday — a nativity scene, a cross and a resurrection.

His only regret, he said, is that the driveway canopy is too low to allow buses to drive through.

“I’ll continue doing ‘em as long as I’m alive and able to keep doing ‘em,” Barger said of the displays, “…That’s gonna be a sad day when I’m not going to be able to do it anymore.”