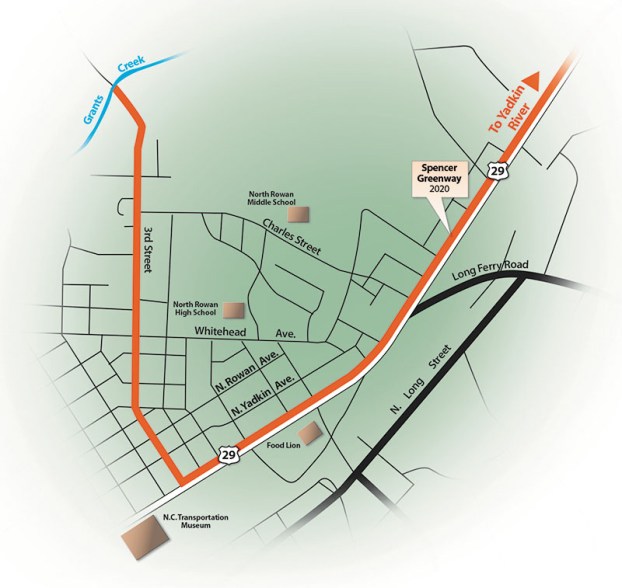 SALISBURY — With the widening of I-85 scheduled to start next year in Rowan County, a number of new local road projects sit on the horizon.

Four projects from Rowan County made the cut for the state’s newest 10-year transportation plan draft. The list of upcoming projects includes a greenway from Spencer to the Yadkin River, a widening of Mooresville Road from an area near Grants Creek to Airport Road and a new road named Airport Parkway, according to the NC Department of Transportation. Another project would be to purchase nearly 25 acres to expand the Rowan County Airport.

Together, the four projects would need more than $80 million in state funds, according to a list provided by DOT staff. However, the list of funded projects have construction dates that vary widely. The Mooresville Road widening, for example, comes with a 2027 construction date and the Spencer greenway project has a 2020 construction date. The airport property purchase is scheduled to occur even sooner — 2018.

Just-announced projects aren’t as pricey as construction that’s scheduled to start next year on an I-85 widening in Rowan County. However, they could provide important connections between local communities, said County Commissioners Chairman Greg Edds.

“If you look at the projects we’ve had in the past, they’ve been really monumental,” Edds said. “There’s been the Yadkin River Bridge and the Old Beatty Ford Road interchange. Now, there’s the smaller projects which really affect the quality of life and these are just as exciting.”

Before funding for the Rowan projects gets finalized, state approval is needed. DOT Board Member Jake Alexander said approval is likely to come in summer 2017.

Projects projected several years in the future — Mooresville Road in 2027 and the Airport Parkway in 2025 — will be reevaluated after five years and could see a change in construction dates.

The state’s list of funded projects allocated $360,000 to the purchase in 2018. Alliance Real Estate, affiliated with Parkdale Mills, currently owns the land.

Once purchased, the land could be a location for new airport hangars, said Commissioners Chairman Greg Edds.

In Spencer, a proposed greenway would start with an expanded sidewalk from Grants Creek on 3rd Street to U.S. 29. It would continue on U.S. 29 — also named North Salisbury Avenue — until reaching the Yadkin River. The greenway would end near the Wil-Cox Bridge and Fort York property, which Davidson County plans to develop into a park.

Spencer Town Manager Reid Walters said there hasn’t been an exact layout determined for the greenway. One possibility Walters mentioned would include reducing U.S. 29 by a lane and using it for a bike lane and walkway.

The latest DOT estimates peg the Spencer greenway at $4.47 million — nearly 900,000 would be provided by the Town of Spencer and about $3.58 million would be state funds. Walters, however, said Spencer may be able to take advantage of other funding sources to limited the amount of local tax dollars the Town of Spencer needs to spend.

Davidson County Planning Director Guy Cornman mentioned the Fork York property at the Yadkin River when saying the greenway in Spencer would be a “win-win situation for both sides of the river.” Davidson County hopes to develop the Fort York property into a historical park.

The remaining two projects — Mooresville Road and Airport Parkway — would occur considerably further in the future and cost considerably more than the prior two.

A Mooresville Road widening is estimated to cost $57.8 million, with a portion of the cost coming from sources other than state funds. The Airport Parkway project would cost roughly $33.43 million, according to state estimates.

Current plans show the new Airport Parkway starting at near Harrison Road’s intersection with Jake Alexander Boulevard. The parkway would intersect with Mooresville Road at or near Candlewick Drive, use park of National Guard Road near the airport and stop at U.S. 29 near Peach Orchard Road, according to current plans.

DOT Division 9 Engineer Pat Ivey said the current plans were drawn up before Peach Orchard Road’s railroad crossing was closed. As a result, the parkway’s route would likely change, he said.

By the time Mooresville Road sees itself widened or an Airport Parkway is built, things could look different in Rowan County. The Airport Parkway could help with future growth, Edds said. Its route hasn’t been finalized, but a preliminary drawing shows the new parkway forming a semi-circle around the Rowan County Airport.

“We think it’s got the potential to be a fantastic economic development tool,”Edds said.

For projects planned far in the future, Edds said actual construction dates may depend on what happens during Governor elect Roy Cooper’s administration.

Alexander, however, said it’s worth noting that the Mooresville Road and Airport Parkway projects scored high enough to be funded under the state’s proposed Transportation Improvement Plan.