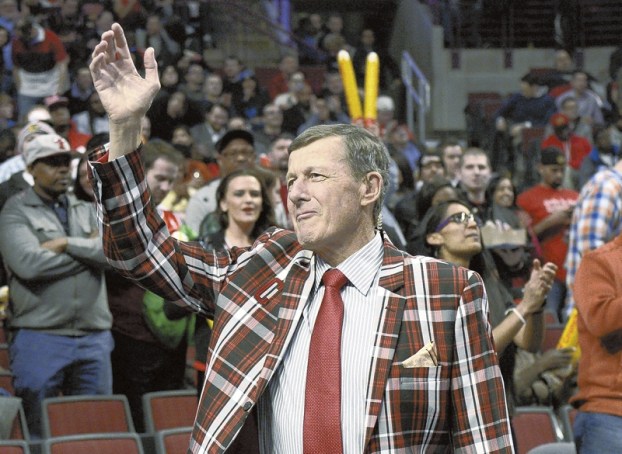 FILE - In this March 5, 2015, file photo, Craig Sager acknowledges the crowd during a timeout in an NBA basketball game between the Chicago Bulls and the Oklahoma City Thunder in Chicago. Longtime NBA sideline reporter Craig Sager has died at the age of 65 after a battle with cancer. Turner President David Levy says in a statement Thursday, Dec. 15, 2016, that Sager had died, without saying when or where. (AP Photo/David Banks, File) HOUSTON (AP) — Craig Sager never once thought about giving up as he battled cancer for more than two years.

“Man, life is too beautiful, too wonderful, there’s just too many things,” he said in late August. “It’s not just you. It’s your family and kids and all. Fight. Fight until the end. Fight as hard as you can.”

The end for the beloved TNT broadcaster came Thursday when the man known as much for his outrageous wardrobe as his relationships with the NBA’s elite succumbed to the disease he fought so hard to overcome. Turner Sports announced his death without disclosing details. He was 65 and had worked basketball games for TNT for nearly a quarter-century.

“Craig Sager was a beloved member of the Turner family for more than three decades and he has been a true inspiration to all of us,” Turner President David Levy said. “There will never be another Craig Sager. His incredible talent, tireless work ethic and commitment to his craft took him all over the world covering sports.”

His son, Craig Jr., posted a loving video tribute to his father, tweeting: “We packed a lifetime and then some into these 28 years together.”

Sager’s passing brought out condolences from every corner of the NBA and Hall of Famer Larry Bird expressed what many were feeling.

“He was as identifiable with the NBA as any player or coach,” Bird said. “The league will not be the same without him.”

“The NBA family lost a legend who changed the way sideline reporters did their job. RIP Craig Sager,” Johnson said.

It wasn’t just the NBA community that mourned his passing, with Vice President Joe Biden and Drake expressing sadness at the loss.

Sager had two bone marrow transplants with his son as the donor before undergoing a third one from an anonymous donor at the end of August in Houston to fight an aggressive form of leukemia. To no one’s surprise, he was characteristically cheerful .

“It really isn’t all that painful, not physically,” he said then. “I think the hardest toll is mentally and emotionally. I have this thing of positive thinking. I think if you think something is going to be right and you think positive then you feel that way and if you feel that way you’ll act that way. I try not to get down.”

Sager announced in April 2014 that he had been diagnosed with acute myeloid leukemia, and he missed the playoffs and much of the following season as he underwent the first two transplants. Sager revealed in March 2016 that his leukemia was no longer in remission. He said doctors told him the typical prognosis was three to six months to live, but “I am receiving the best treatment in the world and I remain fully confident I will win this battle.”

He was overwhelmed by how news of his fight spread and people across the world started talking about the Sager Strong campaign.

“At first was our family’s fight,” Sager said. “Then because of TV and TNT and people seeing me in the stands and I talk to people and then it got bigger and then that inner circle became an endless world to tell you the truth.”

Sager then started gaining inspiration from everyone who shared their story or reached out to show support.

Now I feel I’m not only fighting for what I want and what my family wants, but for everybody out there who has cancer or will.”

His battle brought out the soft side of Gregg Popovich, the prickly San Antonio Spurs coach with whom he had many memorable exchanges during in-game interviews.

Sager never faulted Popovich for his gruff attitude during those interviews, saying “he’s trying to win a game. He doesn’t want to talk to some reporter.” But he said they had a great relationship.

“Later, he said, ‘You’re still going to be media on the court, but off the court can I call you and see how you’re doing?’ I said: ‘Heck yes,’” Sager recalled in August. “Just keep treating me the way on the court you always do. He said: ‘I wouldn’t want it any other way.’”

Popovich didn’t take questions from reporters prior to Thursday night’s game in Phoenix. Instead, he walked out of the visiting locker room and, with a somber tone, spoke only of Sager for close to two minutes.

“A day like this, basketball has to take a back seat, as we all think about somebody who was very unique, very special,” Popovich said. “Whether you really knew Craig or not, you got the feeling that he was a very special person in a lot of different ways, and right now I just feel for his family.”

“He was a way better person than he was a worker, even though he was amazing in that regard. He loved all the people around him and everybody felt that,” he said. “The most amazing part of him is his courage … if any of us can display half the courage he has to stay on this planet, to live every life as if it’s his last, we’d be well off.”

Sager sported suits in every color of the rainbow and plenty of shades not found in nature, from teal to fuchsia to magenta. He would match plaid blazers with paisley ties or striped shirts — all in bold hues.

Kevin Garnett once told him to burn an entire outfit. In a 2016 interview with HBO’s “Real Sports,” Sager recalled how Popovich reproached him for trying to stand out. Sager explained to him: “Coach, you don’t understand. If I’m not wearing bright colors and if I don’t feel lively, it’s not me.”

Sometimes lost in the glare of his wardrobe was Sager’s relentless nature as a reporter. Every time Popovich would give a terse non-answer, an unfazed Sager would pepper him with another question.

During the 2016 NBA All-Star Weekend, Popovich described Sager as “an iconic figure in the NBA.”

“He does a great job,” the coach added. “His sense of humor is obvious. We have a lot of fun going back and forth with that.”

Sager’s persistence was on display at the start of his career, when the 22-year-old found himself in the middle of one of the most famous moments in sports history. Making $95 a week in 1974 as the news director at WSPB – a Braves-affiliated AM radio station in Sarasota, Florida – Sager risked getting fired by deciding to hop a flight to Atlanta for a game with Hank Aaron a home run away from breaking Babe Ruth’s career record.

With a last-minute credential, Sager was stuck in the third-base photographers’ well. As the historic homer sailed out of the park, Sager, without thinking, sprinted onto the field and wound up chasing Aaron down the third-base line. When Aaron’s teammates mobbed him at home plate, Sager can be seen in his trench coat in the middle of the scrum.

The next day, Sager caught a 5 a.m. flight to Sarasota to be back for his morning drive responsibilities, and his tapes from the game wound up in Cooperstown.

Sager worked as a reporter on the Olympics, Major League Baseball playoffs, the NFL and the NCAA Tournament, among other sports. But he was indelibly connected to the NBA.

“Craig was as vital to the NBA as the players and coaches,” NBA Commissioner Adam Silver said in a statement. “A true original and an essential voice on Turner Sports’ NBA coverage for 26 seasons, Craig chronicled some of the most memorable moments in league history and was a ubiquitous presence with his splashy suits and equally colorful personality. Craig earned widespread respect for his insightful reporting and inspired so many most recently with his courage.”

His popularity around the sport was evident as he went through his cancer treatments. Bulls star Dwyane Wade also sold paisley ties during the 2016 playoffs to raise money to combat blood cancers.

Sager got to cover his first NBA Finals in 2016 through an unusual arrangement between TNT and ESPN, which invited him to join its coverage. He marked the occasion by wearing a blazer with a royal blue floral print. In an interview with LeBron James after Game 6, the Cavaliers star turned the tables to giddily ask Sager a question: “How in the hell do you go 30-plus years without getting a Finals game?”

He was self-deprecating when asked what the outpouring of support from across the NBA meant to him.

“It means that I’m not just the nuisance that they see on the court when I’m trying to talk to them when they want to be somewhere else,” he said in August.

And Sager loved everything about his job.

“I try to get there three hours before the game, talk with the ushers and the security guards, the coaches and the fans,” Sager said in 2015.

A native of Batavia, Illinois, Sager attended Northwestern, where he walked onto the football and basketball teams, and served as the school’s “Willie the Wildcat” mascot for three years.

He worked at several TV and radio stations in Florida after college before spending two years in Kansas City. Sager joined CNN in 1981 after handling the network’s first live remote report during the 1980 baseball playoffs.

Sager was in Dallas for a game in April 2014 when he felt ill and sought treatment from Mavericks team physician Dr. Tarek Souryal, who had previously performed Sager’s knee surgery. With a dangerously low hemoglobin count, Sager had six blood transfusions over a 24-hour period before returning to Atlanta. After that came the treatments and his public battle with leukemia.

Earlier this year, Sager was involved in the television coverage of the NCAA Final Four and had a memorable postgame interview with Syracuse coach Jim Boeheim.

“I’m proud of you,” Boeheim told Sager on air after the Orange lost in the national semifinals. “I’m really proud of you and what you’re doing. You’re a fighter and that’s something we all should really aspire to be. You’re setting an example that we all should be really happy to try to follow.”

From staff reports UNC Pembroke sophomore Avery Locklear (South Rowan) had one of her best games of the season on... read more