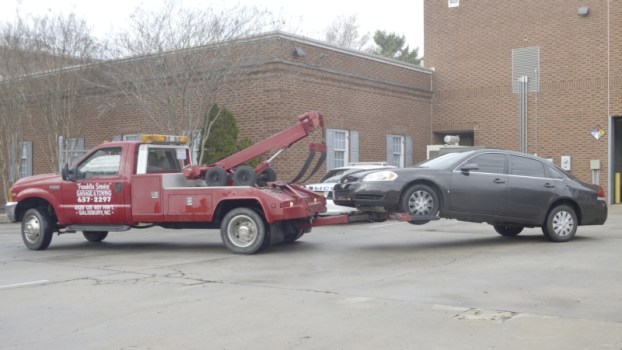 Police offiicals say this gray Chevrolet Impala was the vehicle used to take Sharod Mathis to the hospital after he was shot outside Firewater Restaurant and Lounge the morning of Dec. 4. The vehicle was found abandoned in a wooded area on Long Bow Road. The vehicle was towed to the police department's garage. Shavonne Walker/Salisbury Post UPDATE: Salisbury Police Capt. Shelia Lingle said investigators recovered a gray Chevrolet Impala involved in the Dec. 4 shooting at Firewater Restaurant and Lounge. The vehicle was used to take Sharod Mathis, who was shot outside in the parking lot, to the hospital.

The vehicle was found in a wooded area on Long Bow Road. Police officials had the vehicle towed to the Salisbury Police Department Monday just after 12 p.m.

SALISBURY — Police say a Salisbury woman failed to provide investigators with information connected to the Dec. 4 shooting at Firewater Restaurant and Lounge where 22-year-old Sharod R. Mathis was shot and killed.

Officials also have confirmed the shooting at the Avalon Drive restaurant is also connected to the shooting at 200 Harrel St. where A’yanna Allen, 7, was shot and killed while asleep in her bedroom. Her 56-year-old grandmother, Shirley Robinson, was also asleep in that same bedroom and was shot in the leg.

Police Capt. Shelia Lingle would not confirm Queen’s connection to the incident or any connection to persons involved in the incident. When asked if any Crime Stoppers tips led investigators to Queen, Lingle said detectives were led to Queen through the investigation.

The Post obtained an arrest warrant that does explain the charges in the case. According to the warrant, Queen denied on multiple occasions to law enforcement officers that she observed a firearm on the ground at Firewater following the shooting that occurred there.

The warrant goes on to say Queen not only saw the firearm, but removed a firearm from the crime scene, which “prevents, obstructs, impedes, or hinders public or legal justice.”

The warrant was served Friday, which was five days after the Sunday morning shooting.

Police officials have said an argument ensued before Mathis was shot just after 1 a.m. outside the restaurant in the parking lot. He was taken to the hospital by a private vehicle and later died.

Sometime shortly after 4 a.m. someone shot into the Harrel Street home, including the bedroom window where A’yanna and her grandmother slept.

Family, friends, classmates, teachers and other mourners attended a packed funeral Sunday for the 7-year-old at the church she attended, Gethsemane Missionary Baptist Church. Funeral arrangements are incomplete for Sharod Mathis.

Queen is scheduled for a first court appearance Tuesday morning. She has no known convictions or criminal record. Queen has a pending traffic infraction in Cabarrus County. She remains in the Rowan County Detention Center under a $25,000 secured bond.

Rowan County Commissioners and Salisbury City officials have jointly offered a $20,000 reward through Crime Stoppers for information that leads to an arrest and conviction in the death A’yanna Allen.

This shooting has prompted both the Salisbury Police and the Rowan County Sheriff’s Office to combine forces to help solve the murder of A’yanna Allen. Sheriff’s deputies can now work overtime to assist police officers on the street.

By Shavonne Walker shavonne.walker@salisburypost.com SALISBURY — A’yanna Allen was known for giving away hugs to practically anyone who came across... read more