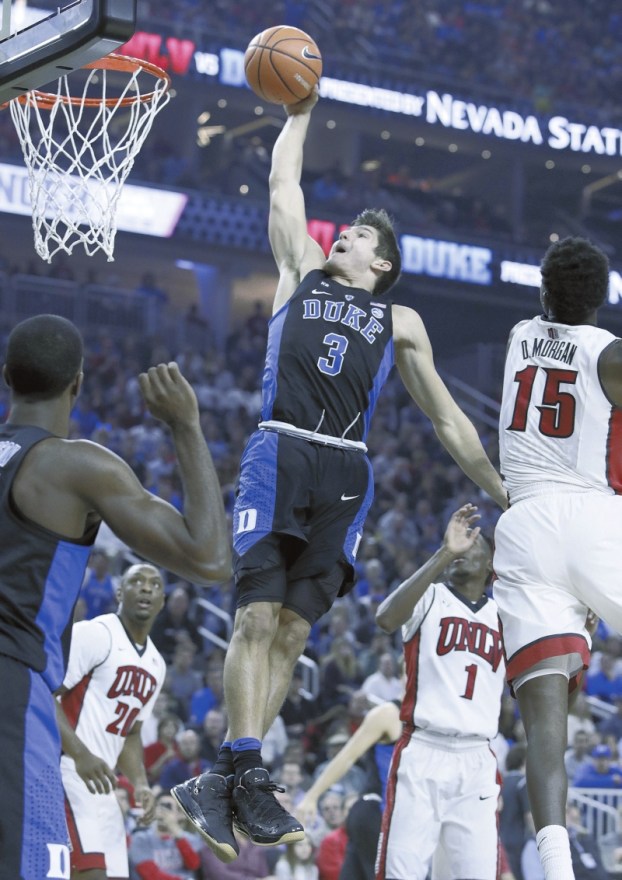 LAS VEGAS (AP) — Not one player in Duke’s basketball program was born when the 1991 Blue Devils pulled off one of the biggest upsets in Final Four history.

So, Thursday, on a five-hour flight to Las Vegas, coach Mike Krzyzewski made his players watch footage from 25 years ago, when Duke beat UNLV 79-77 an epic upset in the national semifinals. It was revenge for the year prior, when UNLV throttled Duke 103-73 in the national championship.

It was the perfect motivation that set the tone for the fifth-ranked Blue Devils, who got a career-high 34 points from Grayson Allen en route to a 94-45 victory over UNLV on Saturday in the first college basketball game ever at T Mobile Arena.

“(We wanted) to let them know that they’re going into a game where we’re playing against a very proud opponent that has accomplished a lot,” Krzyzewski said. “That’s why we watched (the 1991 game). Those games were moments. Moments in history in the game of basketball. So it’s an honor to come here today.”

Allen embraced the honor, and rose to the occasion by shooting 75 percent from the field — including a perfect 7 of 7 in the second half. It was easily the junior guard’s most complete game of the season, as he appeared to be healthy after battling through leg and toe injuries since mid-November.

“He was making the athletic plays that he can make, but couldn’t make from being injured,” Krzyzewski said. “That was a big plus for us. The guys responded really well.”

Once he knocked down the first of his six 3-pointers, three minutes into the game, Allen led an offensive charge that saw four Blue Devils score in double figures.

Jalen Poyser had 16 points for UNLV.

“We ran into, if not the best, one of the top (teams). That’s a Final Four team,” UNLV first-year coach Marvin Menzies said. “I am disappointed we weren’t able to put our best foot forward. I know I have better players than that. This is one game. It is what it is. We will be fine.”

The Rebels (5-4) tried to make a couple of runs to challenge Duke, getting as close as 38-26 late in the first half after an 8-0 spurt. The Blue Devils answered with their defensive prowess and proved to be too much for an outmatched UNLV team that committed 13 turnovers a little more than 14 minutes into the game, and shot just 34 percent (10 of 29) in the first half.

Though UNLV was competitive on the glass, outrebounding the Blue Devils 20-17 in the first half, Duke outscored the Rebels 26-10 in the paint while opening a 42-26 halftime lead.

“We prepared well,” Krzyzewski said. “We prepared to try to beat a really good team, and we did.”

The standing-room only crowd of 19,107 was the highest attendance for a basketball game in Las Vegas since, ironically 1991, during UNLV’s back-to-back Final Four run under the late-Jerry Tarkanian. The previous largest crowd was 19,147, at UNLV’s home, the Thomas & Mack Center, on Feb. 14, 1991, against Cal Santa Barbara.

Duke: In his last four games, Amile Jefferson is averaging 17.7 points and 12.2 rebounds, while shooting 69.7 percent (30 of 43) from the floor. Jefferson came into Saturday’s game leading the ACC in field goal percentage, converting at a rate of 67 percent for the season. He is a career 63 percent shooter from the field.

UNLV: After opening the season 5-2, the Runnin’ Rebels have lost their last two after allowing an average of 95.5 points per game. UNLV lost at Arizona State 97-73 last Saturday.

When Duke and UNLV met in 1990 and ‘91, Nevada sports books were banned from posting point spreads on teams from the Silver State. That also meant whenever UNLV or Nevada made the NCAA Tournament, future odds on teams winning the title couldn’t be posted until either the Runnin’ Rebels or Wolf Pack were eliminated.