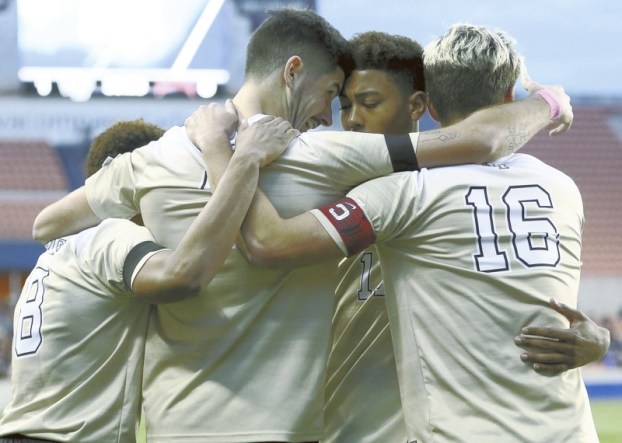 Wake Forest's Jon Bakero (7) celebrates with teammates after scoring during the first half of the NCAA soccer men's College Cup semifinal against Denver, Friday, Dec. 9, 2016, in Houston. (Yi-Chin Lee/Houston Chronicle via AP )

HOUSTON (AP) — After a frustrating first half that saw his team stymied by a resilient Denver defense, Wake Forest coach Bobby Muuss’ message to his team was to keep going.

Following a dominant second half and overtime, Ian Harkes broke in the 102nd minute and Wake Forest beat Denver 2-1 in double overtime Friday to advance to the College Cup title game.

Wake Forest (19-3-2) will face the Stanford-North Carolina winner in the championship Sunday. The Demon Deacons reached the championship game for the first time since winning the 2007 title.

Harkes calmly slotted his low finish past goalkeeper Nick Gardner into the bottom corner to cap an impressive Demon Deacons counter attack. Wake Forest had plenty of opportunities to seal the victory prior to Harkes’ goal, outshooting Denver 14-2 in the second half and overtime.

“I didn’t really expect it to be off the counter-attack,” Harkes said.

Wake Forest’s Jon Bakero opened the scoring in the seventh minute. Bakero took possession from Denver defender Graham Smith 30 yards from goal in the center of the field, turned to his right and delivered a curling effort past Gardner.

Trailing for only the fourth time this season, the Pioneers (20-1-3) responded 10 minutes later. Graham Smith sent a lofted pass over the defense to forward Andre Shinyashiki, who pounced on a rebound to equalize after his first shot was saved by goalkeeper Alec Ferrell. It was Shinyashiki’s team-high ninth goal of the season.

After halftime, Muuss credited his team for settling the game down and taking control.

“They’re tight games,” Muuss said. “No one wants to make mistakes. I thought they did a really great job of staying compact.”

The Pioneers outshot Wake Forest 5-4 in the first half, 5-4, but the Demon Deacons settled the game down and took control from the start of the second half.

“I think there was a little bit of frustration today,” Harkes said. “We need to settle the game down. In the first half, it was a lot of back and forth.”

The Demon Deacons had the best chances in the second half. Bakero took a cross from the right wing and hit a shot off the crossbar, while Harkes had a shot in the final minute go straight at Gardner.

The winner in the second overtime came off the counter-attack following a Denver corner kick. Bakero turned past a defender near midfield and started a 3-on-1 counter with Harkes to his right.

“There was just one defender there and I took a big touch,” Bakero said. “I tried to take him to the left to create space for Ian.”

The loss was Denver’s first of the season and first since losing to SMU in the NCAA Tournament last season.

“I’m really proud of my group,” senior midfielder Sam Hamilton said. “I think we took the program to a place it’s never been, which is not an easy thing to do. We built a belief for the program to feed off of.”

Muuss coached and recruited Denver’s Jamie Franks to play for the Demon Deacons in 2005 as an assistant. Muuss then took his first head coaching job in Denver in 2007. Franks joined his former coach’s staff and became the head coach of the Pioneers when Muuss moved to Wake Forest.

“We had a moment before the game underneath the tunnel that was special,” Franks said. “He’s my mentor.”

Earnhardt Jr. says health is top priority as he prepares for return