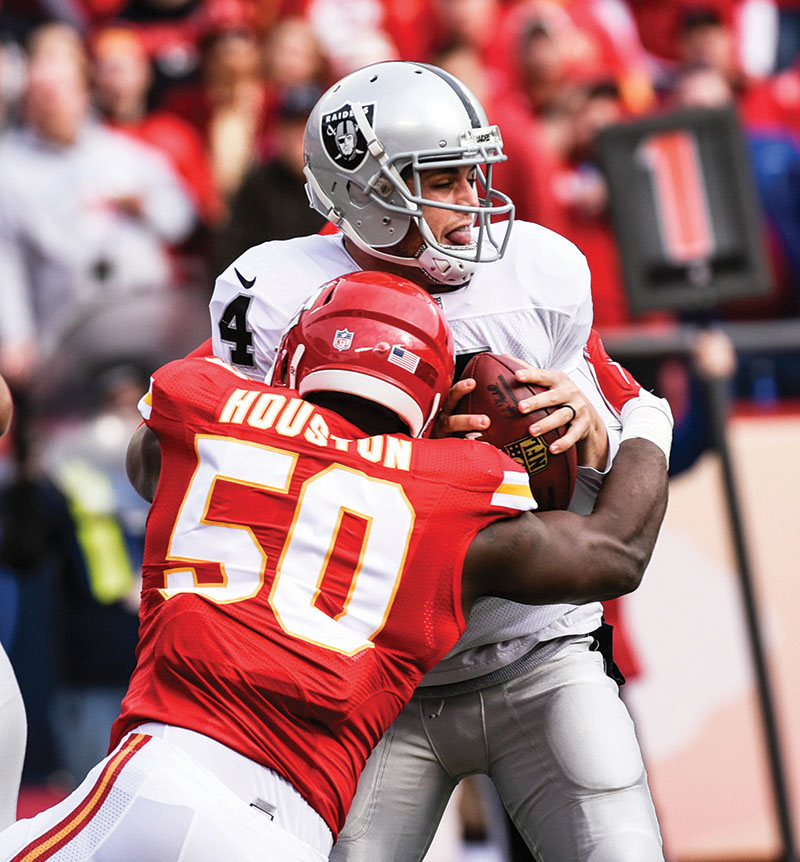 AP Photo/Reed Hoffmann, File ... Kansas City Chiefs linebacker Justin Houston (50) and Oakland Raiders quarterback Derek Carr (4) leads their teams into tonight’s primetime matchup at frosty Arrowhead Stadium. The Raiders are 10-2 and leading the AFC West, one of the surprise teams in the NFL, while the Chiefs are 9-3, with a win over Oakland already in their pocket.

KANSAS CITY, Mo. (AP) — The Raiders and Chiefs are such bitter foes that not even a late-season game between losing teams with no hope of a division title or playoff berth would take away the importance of a matchup.

Now, consider the stakes when they meet Thursday night.

The Raiders are 10-2 and leading the AFC West, one of the surprise teams in the NFL, while the Chiefs are 9-3, with a win over Oakland already in their pocket. The winner of their prime-time matchup at frosty Arrowhead Stadium will have the inside track on ending a lengthy division title drought, not to mention the potential for a first-round playoff bye and a home game in the second round.

“We know the type of game it is, big game,” Chiefs wide receiver Albert Wilson said. “The Chiefs and Raiders have a long history against each other. You understand the importance and what you’re playing for, but you have to treat it like any other game.”

The Chiefs have won seven of their last eight, a stretch that began with a 26-10 win in Oakland on Oct. 16, and have won four straight against their old AFL rivals. And while the Raiders are chasing their first division title since 2002 , the Chiefs are trying for their first since 2010 .

Significant stakes, to be sure. Just like in the 1960s, when the Raiders and Chiefs were often in contention.

“We always have old players come in and talk to us and tell us how violent the games used to be, and how physical they used to be,” Raiders quarterback Derek Carr said , “and obviously, they talk about how the game’s changed and things like that, as all past players do. That’s really the main thing that sticks out — how violent and physical the games were. They would always talk about that.”

First, the Chiefs have ferocious linebacker Justin Houston back from the knee injury that sidelined him for the first matchup. And the Raiders counter with a defense led by Khalil Mack that shut out Buffalo for most of the second half last week, allowing Oakland to rally for a 38-24 victory.

Then, consider the weather: The forecast calls for temperatures in the teens at kickoff, with a wind chill that could dip into the single digits by the fourth quarter.

It should make for an old-school matchup with stakes that couldn’t be much higher .

“You have to get ready for the team. You can’t worry about all that,” Chiefs coach Andy Reid said. “You spend all your energy studying the team and getting yourself to know the game plan. Anything short of that I think you’re short-changing yourself.”

As the Raiders and Chiefs prepare to meet for the 116th time, here are some key story lines:

MACLIN IN THE SADDLE: Chiefs wide receiver Jeremy Maclin has missed four games with a groin injury, but he’s been practicing the past couple of weeks and there’s optimism he’ll be available. “If that’s the case, it’ll be an awesome addition,” Chiefs quarterback Alex Smith said. “Jeremy is a special player.”

SERIES DOMINANCE: The Chiefs have won six of the last seven in the series, Raiders coach Jack Del Rio is winless against Kansas City in three tries with the silver and black, and Smith is 8-1 against the Raiders in his career.

GIMMICKY? SURE: Del Rio took some heat from Chiefs fans for calling Smith’s play “gimmicky” after their first meeting, but he intended it as a compliment. The constant shifts, unorthodox lineups and fake handoffs kept getting Oakland out of position. “Those are effective plays. You can call it what you want,” Del Rio said. “If the word is something they don’t like, too bad.”

DOUBLE TROUBLE: While Mack gets the attention on Oakland’s defense with sacks in seven straight games, and back-to-back games with strip-sacks and recoveries, linebacker Bruce Irvin also must be feared. He has sacks in three straight games. “We feed off each other’s energy,” Mack said.

SHOTGUN SNAPS: After hurting his pinkie two weeks ago while taking a snap, Carr has not gone under center. He worked exclusively out of the shotgun against Carolina, then the shotgun and pistol formations against Buffalo. “We worked a lot on it in the offseason,” Carr said of the pistol. “It’s cool to actually take it out there and use it.”

TAY TRAIN: After missing the first meeting with Kansas City with turf toe, Latavius Murray will be counted on to give the Raiders a big boost. He has six touchdowns in the past four games. “Any way I can be a threat,” he said, “any way I can get the ball in my hands,” he added, “I want it.”