North Rowan falls to Reidsville in 2A football playoffs 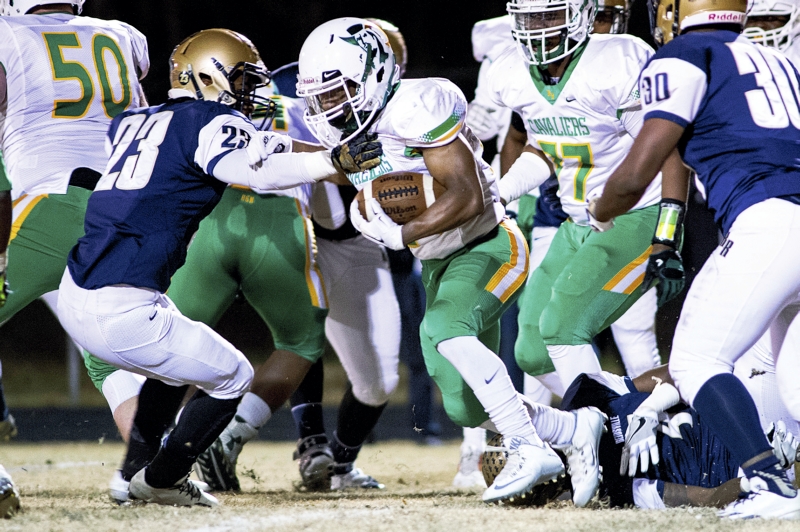 Photo by Doug Anderson ... North Rowan running back Jaleel Webster looks for running room against the Reidsville defense in the 30-13 Rams' victory on Friday in the third round of the NCHSAA 2A playoffs.

Reidsville’s defense bent, but didn’t break in several key instances that could have turned the momentum in favor of North Rowan.

Rams kicker Brad Green nailed a 41-yard field goal early in the third quarter and later Bryson Durham scored after a lengthy Reidsville drive for a 10-0 lead at the half.

The Cavaliers tried the onside kick at the beginning of the third quarter, but the Rams recovered near midfield to set up another scoring drive that culminated with a Jaron Letterlough scoring from inside the 5-yard line for a 17-0 lead and some breathing room.

North Rowan wasn’t done however, as Jaleel Webster broke a big one for a 66-yard touchdown run to cut it to a two-possession game with 3:21 remaining in the period.

The Cavaliers defense seemed to have the Rams stopped, but Titus Jones threw a pass to Letterlough for a huge gain on a fake punt to set up another first and goal. Wilson hit Jalen

Foster for a touchdown from the 1-yard line three plays later to extend the lead to 24-7.

It may have been the biggest play of the game, because a score by North Rowan could have cut the Reidsville lead to one possession.

Tanner Wilson added another fourth quarter score on a 15-yard run to put Reidsville’s final points of the night on the board.

North Rowan would score one more time midway through the half, as Webster again got loose for a long, 34-yard TD run. The Cavs’ two-point conversion attempt failed for the final 30-13 margin.

The Rams controlled things after that and were able to run out the clock to secure the win.

“After they missed the field goal, we were able to move down and get the field goal and then a touchdown,” said Reidsville coach Jimmy Teague. “Then, getting a score at the beginning of the second half was big, and that really turned things around for us. We knew it was going to be a tough game because they’ve got a good football team. To win a state championship, you know you are going to play good people, and we know we’ve got another one next Friday night.”