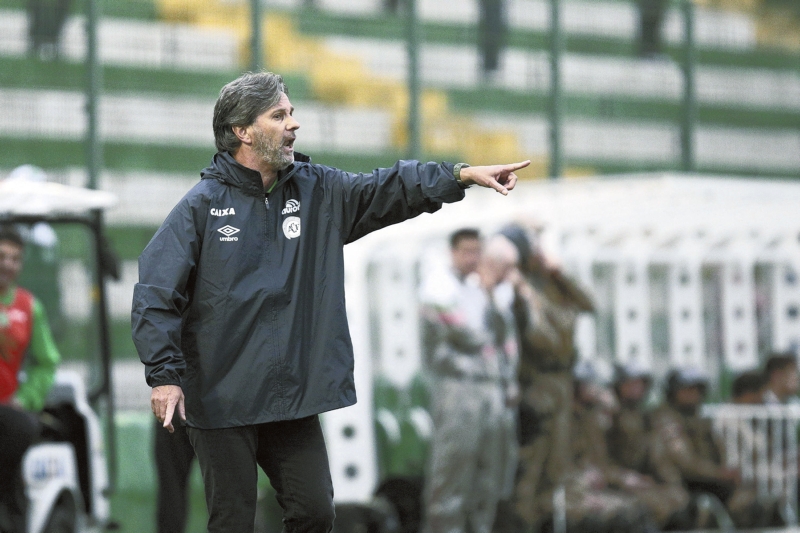 In this Sept. 18, 2016 photo, Chapecoense coach Caio Junior gives instruction to players from the sidelines during a national soccer championship match in Chapeco, Brazil. Junior died when the plane carrying his Brazilian first division soccer club team crashed in a mountainous area outside Medellin, Colombian officials said Tuesday. The team was on it's to Medellin for a Copa Sudamericana final match. (Marcio Cunha/Mafalda Press via AP)

CHAPECO, Brazil (AP) — For the players on the humble Brazilian club from an out-of-the-way city known for its agribusiness plants, these were going to be the games of their lives.

Chapecoense was having the best season in its 43-year history, heading to the first of two matches in the final of the Copa Sudamericana, the continent’s No. 2 club tournament. The once-downtrodden club and its itinerant players were enjoying the heights of soccer glory.

It all ended suddenly late Monday night on a muddy Colombian hillside. Their chartered aircraft crashed south of Medellin, killing 71 of the 77 people aboard, including most of the team. Three players were among the survivors.

The tragedy stunned the southern city of Chapeco and its 200,000 residents, and fans gathered in silence Tuesday to mourn outside the team’s small green-and-white concrete stadium.

“The city is very quiet,” businessman Cecilio Hans said. “People will only believe once the bodies start to arrive.”

On social media, haunting last photos showed the smiling players boarding the flight to Colombia for the first of two matches against Atletico Nacional.

In one photo, the team celebrated a last-minute save by goalkeeper Danilo only a week ago against Argentine club San Lorenzo. The save guaranteed Chapecoense a spot in the final — and ultimately cost Danilo his life in the crash.

“Now I wish he would have conceded that goal,” said 17-year-old fan Rubens Vieira.

The club, known as Chape, was in the midst of a remarkable run. As recently as 2009, the club was playing in Brazil’s fourth division, but it won promotion to the top league in 2014 for the first time since the 1970s.

Victories over San Lorenzo and Independente — two of Argentina’s fiercest squads — as well as Colombian club Junior took the team to the Copa Sudamericana finals, the equivalent of the UEFA Europa League tournament.

On Sunday, Chapecoense nearly defeated famed Sao Paulo club Palmeiras, which won 1-0 to claim its first Brazilian league title in decades. Chape had gained admirers for its stout play against Palmeiras, and everything was set for Wednesday’s showdown in Colombia. The second match was to be a week later in Brazil.

Hans remembered that about a decade ago, “this club nearly disappeared. Then businessmen started to help.”

Few of the players had an international profile, and none had any appearances with Brazil’s glitzy national team or time with top European clubs. Most had played all over Brazil and Latin America. A few like Cleber Santana had reached Europe, playing with Atletico Madrid from 2007-10.

Chape strikers Bruno Rangel and Kempes, both 34, were among the top scorers in the Brazilian league, with 10 and nine goals, respectively.

The only players to survive were goalkeeper Jakson Follmann, defender Hélio Zampier, commonly known as Neto, and defender-midfielder Alan Ruschel.

Part of Chape’s recent rise was due to coach Caio Junior, who joined the club this year after guiding teams in the Middle East. Born Luiz Carlos Saroli, he coached numerous Brazilian teams, including Palmeiras, Flamengo and Botafogo.

He was among the dead. But his son, Matheus Saroli, survived, saying in a Facebook post that he missed the flight “because I forgot my passport.”

An Argentine player on the club, Alejandro Martinuccio, also missed the flight because of an injury during a game, he told Argentina’s La Red radio.

“I feel deep sadness. The only thing I can ask is prayers for the companions who were on the flight,” he said.

Psychologist Sonia Smaniotto said she came to the stadium in Chapeco at 7 a.m. to help counsel bereaved fans.

“This is horrible for the city, but it will be even worse for the families,” she said. “Each burial will be the burial of a hero because those families of footballers are built around their careers. These families were hoping to be on the top of the world. Now they’ve lost the center of their lives.”

Also among the dead were 20 sports journalists, including Mario Sergio Pontes de Paiva, a former player who worked as a commentator for Fox Sports. He played briefly for Brazil’s national team in the early 1980s and had a long career as a midfielder and coach with many Brazilian clubs. He last coached Brazilian club Internacional in 2009 and Ceara in 2010.

“This is a very, very sad day for football,” FIFA President Gianni Infantino said in a statement. “At this difficult time our thoughts are with the victims, their families and friends.”

Around the world, the sport paused to remember the victims.

Barcelona and Real Madrid have held a minute of silence before their practice sessions. France’s top two leagues said there would be a minute’s silence at Tuesday night’s games, and defending League One champion Paris Saint-Germain also tweeted a photo of its players and staff standing in silent tribute.

Medellin-based Atletico Nacional said it was asking the South American soccer confederation to give the Copa Sudamericana title to Chape as a tribute to the players who died.

In addition, some of Brazil’s top clubs said they want to give players to Chape on a free loan for the 2017 season. They also say the club should not be relegated to the second division for three years as it recovers from the disaster.

“The dream is not over. We will fight back when it’s time,” said Chape’s acting club president Gelson Della Costa.

“Now it’s time to take care of the families,” he said.