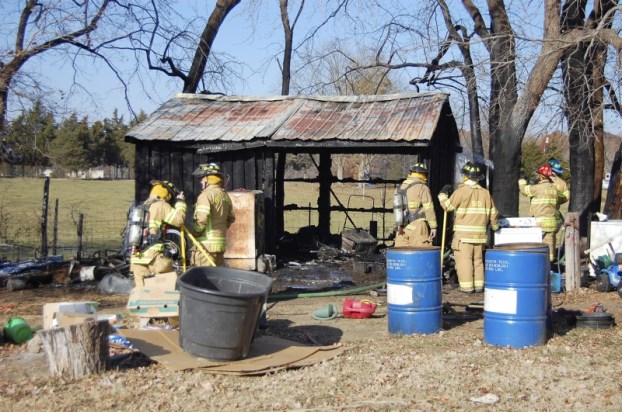 Amanda Raymond/Salisbury Post A bin with fireplace ashes and hay inside placed next to an outbuilding on Cooley Farm Road caused a fire on Sunday.

SCOTCH IRISH TOWNSHIP – A fire believed to have been caused by fireplace ash destroyed a building in the 100 block of Cooley Farm Road on Sunday.

Jake Cooley, owner of the property, cleaned out his fireplace and put the ashes in a combustible bin by the side of a outbuilding. The bin also had hay inside.

The mixture of ashes and hay caught fire, and the blaze spread to the side of the building.

Cooley said an aunt who lives nearby noticed the fire and called 911.

When firefighters arrived, Chief David Lee Johnson said the fire was fully involved. The building and its contents were lost.

There was also a small grass fire that occurred because of the building fire.

Johnson said the fire was under control in 10 minutes.

Cooley said equipment, tools and camping supplies were in the building. He and his father, who passed away a few years ago, actually built the building together.

Cooley said he could probably rebuild, but it wouldn’t be the same.

“Be careful where you put your ashes from your fireplace,” Cooley said.

David Sells, from the Rowan County fire marshal’s office, advised when throwing away ashes, put them in a metal bin or other non-combustible container and soak them with water. He also warned not to put the container near buildings.

If a non-combustible bin is unavailable, Sells said to dig a hole, place the ashes in it and soak them.

The Scotch Irish, Cooleemee, Woodleaf and Cleveland fire departments responded to the fire.