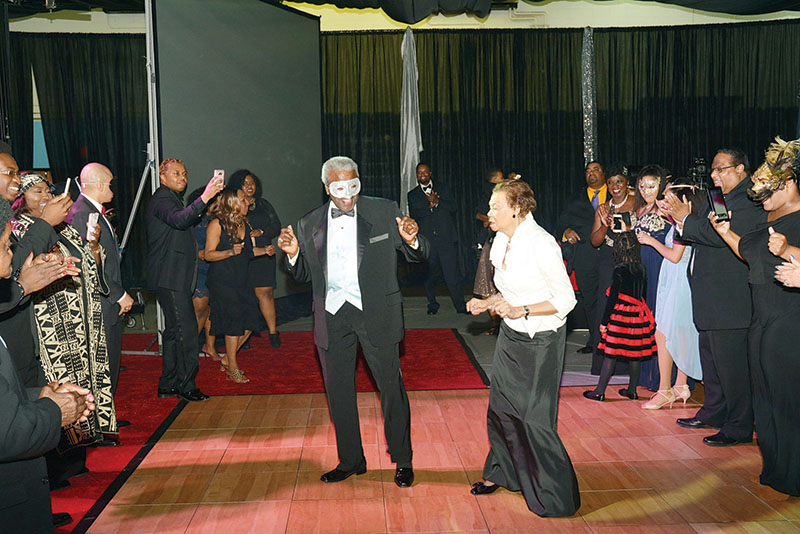 SALISBURY — The food was good and the music was great; however, the money raised Saturday night during the culmination of a weeklong series of activities commemorating the 10-Year Anniversary of Livingstone College President Dr. Jimmy R. Jenkins, Sr. took the cake.

That’s because the President’s Masked Scholarship Ball, held in a beautifully decorated New Trent Gym, netted a half million dollars for student scholarships.

The bulk of the money was announced when Bishop George E. Battle, Jr, Senior Bishop in the African Methodist Episcopal Zion Church and Chairman of the Livingstone College Board of Trustees, took center stage to praise Jenkins for his leadership and the dramatic transformation he’s spearheaded at the college.

Battle told the nearly 250 people in attendance about numerous contributions Jenkins has made, including construction of a fence along Monroe Street that’s designed to help beautify the campus while ensuring safety for students, faculty and staff. He also mentioned Jenkins’ decision to move the Blue Bear mascot from in front of the gym to the front lawn — and to paint it blue.

He discussed how Jenkins purchased the former Holiday Inn on Jake Alexander Boulevard to house the institution’s School of Hospitality Management & Culinary Arts and also how, under Jenkins’ watch, the men’s basketball team has gone from being the laughingstock of the Central Intercollegiate Athletic Association to a formidable foe that won back-to-back CIAA titles in 2014 and 2015, narrowly lost its chance to three-peat earlier this year and has been to the championship game in five of the past six seasons.

“This is the vision that Dr. Jenkins has, to take a gymnasium and make it a hallowed place in which to celebrate 10 years,” Battle said, noting Jenkins could have spent money to hold the gala in a fancy venue. “Livingstone College is a friend to the friendless, to students who may have the brains but not the money to attend school. Livingstone takes students where they are and ascends them to higher heights. I can tell you how this school has operated in the red for years, but during the last seven or eight years Dr. Jenkins has been in charge, we’ve operated in the black.”

Battle’s comments were met with heavy applause. But when he began announcing contributions he’d garnered on behalf of the 137-year-old institution founded by the AME Zion Church, the applause turned thunderous.

“During the AME Zion Church’s 50th Quadrennial in July, I wrote my good friend and CEO of BB&T Bank a letter and told him our church was 220 years old,” Battle said. “And I told him that’s what I wanted a check for, and he gave Livingstone a check for $220,000. And Mr. President, on behalf of Bank of America, I also have a check for $100,000. I want you to know, Mr. President, that the AME Zion Church has your back, and whatever you hear out in the atmosphere, I want you to know no weapon formed against you shall prosper.”

Livingstone was also given $51,000 Saturday night from Victor Wallace of Wallace Realty, $10,000 from The Jenkins Family, presented by one of the president’s sisters, Dr. Alma Jenkins, a gastroenterologist, $25,000 from Bob Setzer of F&M Bank, $43,250 from the Class of 1976, presented by Interim Director of Alumni Affairs Candice Johnson, and $47,000 from the Class of 1971, presented by Nigel Alston, alumni member on the BOT and vice president of the Livingstone College National Alumni Association.

Augustus Jones presented Jenkins with a plaque on behalf of Omega Psi Phi Fraternity, Inc. A video of Jenkins produced by Jack Brayboy of Brayboy Communications, Inc. added a special touch to the evening. And another poignant moment occurred when Dr. Hope Williams, president of North Carolina Independent Colleges and Universities, presented Jenkins with the Order of the Long Leaf Pine on behalf of Gov. Pat McCrory. The Order of the Long Leaf Pine is the highest civilian honor bestowed by the governor’s office.

The President’s Masked Scholarship Ball was a fitting way to round out a week of celebration in Jenkins’ honor. Other events included a Royal Endowment Gala, hosted by Livingstone College First Lady Dr. Faleese Moore Jenkins, a play about the history of HBCUs, written by Livingstone Theater Instructor Michael D. Connor, a Quiz Bowl for students, a golf tournament and an Ecumenical Prayer Breakfast.

Dr. State W. Alexander, III, executive assistant to the president and vice president for communications and public relations, served as master of ceremonies, and the Reverend Juanita Allen gave the invocation and blessing. Food was prepared by Perkins Management, under the leadership of Andrea Allen, and Sumthin 4 Tha People provided musical entertainment.

Jenkins was noticeably filled with emotion Saturday as he and his wife stood on stage to accept the sizable contributions announced by Battle. In the video produced by Brayboy, Jenkins thanked his wife of 51 years and acknowledged he couldn’t have had as successful a career as he’s enjoyed without her.

After Jenkins’ closing remarks, during which he thanked everyone for their support and gave special thanks to Johnson and Avery Staley in his Office of Institutional Advancement, he and his wife led attendees in dancing to hits like “Purple Rain” by Prince, “Superstition” by Stevie Wonder and “Can You Stand the Rain” by New Edition.”