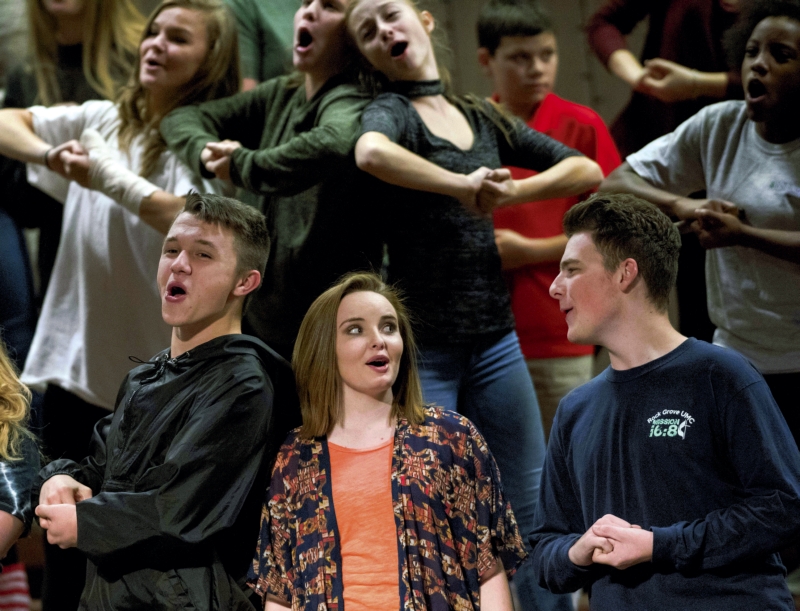 “White Christmas” is full of laughs, romance and hijinks set to music by Irving Berlin.

The story was made famous by the 1954 film starring Bing Crosby, Michael Cirtiz, Danny Kaye, Rosemary Clooney and Vera-Ellen, but Carson will perform the stage musical, which first premiered in St. Louis, Mo., in 2000, for its ninth musical production.

Staff and students have high hopes for the production, which kicks off Dec. 15.

“A lot of people love it at face value,” theater teacher Bristol Glass said. “It’s a classic that we’ve all loved since we were little.”

Normally, Glass and co-teacher Alex Reynolds said Carson puts on a musical in the spring, and does a series of short plays around Christmas. But at the end of the last school year, Glass and Reynolds thought it might be nice to change things up with a Christmas production.

The whole school has gotten behind it, with students helping construct the set, teachers donating Christmas decorations and the school’s band director and students working hard to pull together an orchestra during marching band season.

None of them had seen the film or the stage production until they landed a part — a phenomenon Reynolds said is fairly common.

“When we pick a classic there’s an instant moment of, ‘What is this? I have to go check it out,’” he said.

Those going to see the Carson production will notice a few key differences between the stage production and the beloved film.

The students also noted that there’s more conflict between the lead characters than there is in the film. The two male leads have their fateful encounter with the Haynes sisters in New York, instead of in Miami, and Reynolds said the number “Choreography” has been replaced with one called “I Love A Piano.”

The show’s own choreography has been arranged by Sydney Overcash and McKenna Pate, two Catawba students with Center Stage Dance Company. Costumes are from Varnadore Costumes.

Each performance will feature students from Bostian, Shive, Knollwood, China Grove and Rockwell elementaries singing in the musical’s finale.

Tickets are on sale now for “White Christmas” and can be purchased at theatrecarson.weebly.com. Shows will be Dec. 15 through 17 at 7 p.m. and Dec. 18 at 2 p.m.