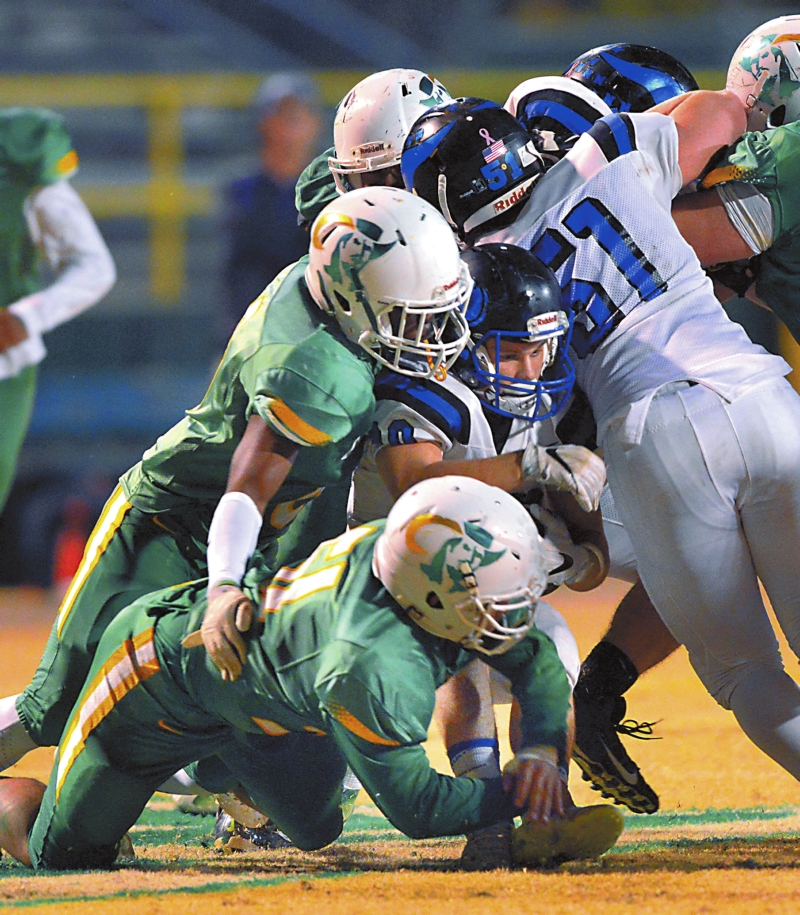 Wayne Hinshaw/for the Salisbury Post ... North Rowan’s Malik Alford, above, and Nautica Patterson, below, tackle North Wilkes’ Jarrett Grimes (in the middle), during the 2A state playoff game in Spencer last night. The Cavaliers won, 28-0.

SPENCER — Speed can turn an awful play into a great one in a hurry, and North Rowan’s DeAndre Gray did that in Friday’s 28-0 win against North Wilkes (7-5) in the first round of the 2A state playoffs.
It was the fourth play from scrimmage, and North Rowan (10-2) was facing second-and-18 at its 23. Quarterback Corbin Smith juggled a shotgun snap, and almost immediately there was a North Wilkes player closing in on him as he desperately rolled to his right. Smith fired the ball back across the field, almost to the North Wilkes sideline, Gray plucked the ball from the air and took it from there.
“I was just trying to throw that ball out of bounds, trying to avoid a sack,” Smith said. “But any time one of our receivers gets the ball in his hands, there’s a chance he can go all the way.”
Gray was as surprised as anyone that he was able to sprint 77 yards to the end zone.
“I thought that play was going to be nothing,” he said. “But I juked, saw an opening, and took off.”
Smith, who threw for a career-high 314 yards, hit towering target Alonzo Sirleaf for a 41-yard gain that got another drive going a few minutes later. Jayden Jones took the ball to the 1-yard line with a 16-yard romp, and then Smith made it 14-0 on a quarterback sneak.
North Wilkes controlled the ball and ran big chunks off the clock in the latter stages of the first quarter and most of the second quarter, with Jarrett Grimes (36 carries, 143 yards) pounding away, but North Rowan’s defense never broke.
“That guy is leading the state in rushing for a reason,” North Rowan coach Ben Hampton said. “And their offensive line was doing a good job of coming off the ball. We had a better answer for them after some halftime adjustments.”
The Cavaliers pushed their lead to 21-0 late in the first half on the second of Smith’s three touchdown passes. This one came on a screen to Desmond Gray, DeAndre’s twin brother.
“We knew going in we were going to be able to throw our screens because they were giving our receivers cushions of 10 yards,” Smith said. “The Grays are big targets for us. Give them one good block on a screen, and they can go.”
Smith almost overthrew Desmond Gray, but he reeled the ball in with a lunging catch, and then made a swift cut back to the middle of the field and had a clear lane for a 20-yard touchdown. Jacob Young’s PAT gave the third-seeded Cavaliers a 21-0 lead at the break.
North made halftime adjustments that enabled linebackers Javin Goodine and Nautica Patterson to make more tackles — and tackles closer to the line of scrimmage.
“They had a good gameplan, and we were getting sealed off and double-teamed a lot in the first half,” North defensive lineman Steven Thurston said. “But in the second half, the linemen were able to help out our linebackers a lot more.”
North Rowan had a playoff shutout not long ago — in the first round of the 2013 playoffs against Surry Central — and this game took on a similar feel. Zion DeBose and Goodine turned one of No. 6 seed North Wilkes’ rare pass attempts into a 20-yard sack, and DB Chris Clodfelter and lineman Matthew Hoosier picked off passes.
Hoosier intercepted a screen.
“I stayed back, saw it coming,” said Hoosier who made several big hits on special teams. “We knew this would be physical, and we out-physicaled them.”
In the second half, North Rowan got its running game going, and the defense stayed firm.
North Rowan’s only score in the second half came when Smith connected with Desmond Gray on a 58-yard pass play with 5:38 left in the third quarter. Smith hit a streaking Gray in stride.
“We knew from watching film we were going to able to out-run their defensive backs,” Desmond Gray said. “That was just a take-off route, and I got behind my guy.”
Smith threw three interceptions, although two came after North Rowan’s victory was assured.
“Some balls got out of his hand late,” Hampton said. “It was like he almost had too much time to throw. But he had a good game and made the right reads. Even on the interceptions, he made the right read. The plays were there.”
Next for North Rowan is a game at Brevard. Brevard beat Carver, 28-14.