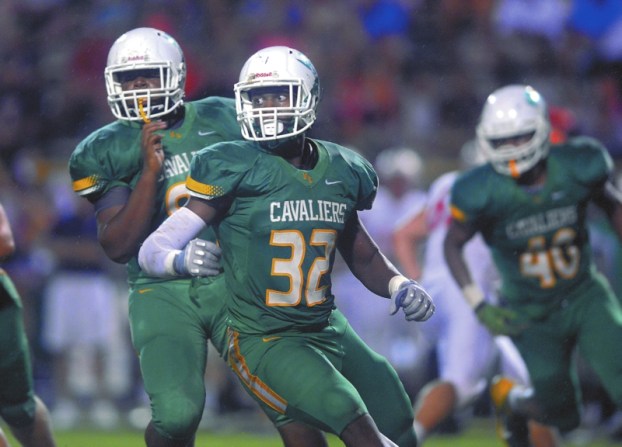 The prep football playoffs start tonight, a week later than usual.
Coaches tried to figure out creative ways to handle last week’s off week that allowed teams in the eastern part of the state to finish hurricane-delayed regular seasons. Some Rowan teams practiced four days last week. Some practiced three.
Teams that were on a major roll, such as Davie and North Rowan, have to try to regain momentum tonight after the long layoff.
Five of the six area teams that made the playoffs won their final game of the regular season. West Rowan didn’t win its last one, so the break could prove most beneficial to the regrouping Falcons.
East Rowan and Carson had to win their last one just to squeak into the playoffs. Their stay is expected to be brief, but at least they’ll have their chance.
“You never go into a season shooting for 4-7,” East coach Kenneth McClamrock said. “But the important thing is to be playing in the postseason.”
The postseason, after all, is what people remember. No one remembers East Rowan went 7-7 two years ago. What fans do remember is that the Mustangs won two road playoff games and went out with a bang in their third one.
Not many people remember that A.L. Brown began the 1997 playoffs on the road in the mountains as a No. 13 seed. A lot of people do remember that the Wonders won the 3A state championship.
Not many people remember Davie lost six times in the 2010 regular season. But people do remember that Davie played for the 4A state title in front of a sea of orange in Winston-Salem.
As far as tonight, it will be a surprise if Davie County, West Rowan and North Rowan don’t advance. It will stunning if either East Rowan or Carson survives. As far as A.L. Brown-Glenn, that’s a matchup of 8-3 teams, and there’s a debate about who’s going to prevail.
•••
(No. 7 West) Morganton Freedom (6-5) at (No. 2 Midwest) West Rowan (8-3)
Bracket: 3A
History: They’ve met once before in the playoffs. West crushed Freedom, 48-15, in the first round in 2009 on the way to the second of its three consecutive 3A titles.
The matchup: Freedom has the higher-scoring offense, while West has much stouter defensive stats. Freedom is 3-2 on the road. West is 5-1 at home.
Scouting report: Freedom relies on an extra-large offensive line and C.J. Hayden, a fine sophomore running back.
Freedom has been demolished by the three best teams it’s played — Hibriten, Shelby and Watauga. Freedom also is coming off a loss — the first in school history — to crosstown rival Patton. That doesn’t mean West will demolish Freedom. it just means that the Falcons should win.
Next: A win would keep the Falcons at home in Round 2.
Pick: West Rowan 27, Freedom 14
•••
(No. 7 Midwest) Carson (4-7) at (No. 2 West) Canton Pisgah (10-1)
Bracket: 3A
History: While Carson and Pisgah haven’t played before, Carson coach Joe Pinyan battled Pisgah in the playoffs in 2008 and 2009 when he was at the helm at Salisbury. Pinyan was 1-1 in those scraps, losing in 2008, a season that forfeits put the Hornets on the road in the first round, but pummeling Pisgah in the rematch.
The matchup: Pisgah is 6-0 at home. Carson is 1-5 on the road. Pisgah has a much more potent offense as well as better defensive stats. Although it’s not like Pisgah had to play Concord, Robinson and Hickory Ridge. Those teams tend to hurt your stats.
Scouting report: Pisgah’s Tanner Wike is a dual-threat QB with good rushing numbers. Pisgah’s 240-pound fullback, Michael Parrott, is headed to Alabama as a preferred walk-on. Trey Morgan has 15 touchdown catches.
Pisgah’s only loss was at Brevard. Pisgah beat Tuscola, and Tuscola went 10-1.
Pick: Pisgah 31, Carson 14

(No. 6 Midwest) East Rowan (4-7) at (No. 3 West) Shelby Crest (8-3)
Bracket: 3A
History: First meeting. East coach Kenneth McClamrock said he’s never been to Crest, in southwestern Cleveland County, in his playing career or coaching career. He has been to Shelby High, six miles up Highway 150 from Crest, which is pretty close to Gardner-Webb University.
You probably didn’t know that Crest is an acronym for “Cleveland Rural Education Stands Together.” You probably did know that Crest is where N.C. State basketball legend David Thompson played high school ball.
The matchup: Crest is 4-2 at home. East Rowan is 1-5 on the road. The offensive numbers are surprisingly even, but Crest has a huge advantage as far as defensive stats.
Scouting report: Crest has formidable talent. Justin Foster, a 6-foot-5, 255-pound outside linebacker, will be in the Army All-American Bowl. Foster and DB DeQuondre Wilson were picked for the Shrine Bowl. Receiver Tyshun Odom has 67 catches for 1,049 yards.
Crest is a passing team. The Chargers’ defense has allowed only 12 points per game.
Crest lost a two-point game to Shelby and one-point game to Kings Mountain. The other loss was to South Point, a No. 1 seed.
Pick: Crest 28, East Rowan 7
•••
(No. 6 West) North Wilkes (7-4) at (No. 3 Midwest) North Rowan (9-2)
Bracket: 2A
History: This will be North’s first encounter with the Vikings.
The matchup: North Wilkes is 4-2 on the road. North Rowan is 5-0 at home. North Rowan has much better defensive numbers, but North Wilkes’ offense has outscored the Cavaliers.
Scouting report: North Wilkes has a sledgehammer approach. The Vikings aren’t trying to trick anyone. They’re coming straight downhill. Junior back Jarrett Grimes has run the ball an astounding 440 times. He rushes for about 6 yards per carry and 231 yards per game. He has 2,547 rushing yards for the season and 29 touchdowns.
So this one isn’t complicated. If North Rowan can stop the run — and the defensive line is the Cavaliers’ strongest component — then it wins handily. If Grimes has another big night, than it get interesting.
Next: North Rowan has a chance to be at home again next week, but that would require Carver upsetting Brevard.
Pick: North Rowan 28, North Wilkes 13
•••
(No. 8 Midwest) SE Guilford (6-5) at (No. 1 West) Davie County (10-1)
Bracket: 4A
History: First meeting.
The matchup: Davie is 5-1 at home, with the loss coming against Greensboro Dudley. Southeast Guilford is 2-3 on the road.
Davie, ranked 10th in 4A, has far superior stats, offensively and defensively.
Scouting report: SE Guilford’s Falcons are a running team. They’ve thrown two TD passes all season, and two touchdowns is just a decent quarter for Davie QB Chris Reynolds. SE Guilford runs with power (210-pound fullback Chad Stephens) or with speed (Miles Fairley).
Can SE Guilford run the ball against Davie? Probably not.
Next: If Davie wins, the War Eagles would host the A.L. Brown-Glenn winner.
Pick: Davie County 31, SE Guilford 13
•••
(No. 5 West) A.L. Brown (8-3) at (No. 4 Midwest) Kernersville Glenn (8-3)
Bracket: 4A
History: Glenn leads the all-time series, 1-0. Winning 35-34, Glenn shocked an A.L. Brown team that was ranked fifth in 3A in the first round of the 1993 playoffs. Now, 23 years later, the Wonders finally get a rematch.
The matchup: Glenn has more offensive firepower and has put up 38 points per game. A.L. Brown’s defense is far superior to Glenn’s, allowing 161 points to Glenn’s 333. The Wonders haven’t allowed more than 24 points in a game, and they’ve taken on some monsters.
Scouting report: Glenn throws it, throws it, and then throws it again. Junior QB Stephon Brown Jr. stands 6-foot-5 and has put up monumental stats — 3,177 passing yards and 40 passing touchdowns.
The Wonders are a running team, so they’ll try to keep the ball away from Glenn’s offense with ball control.
The folks who deal with power ratings have this one virtually even. MaxPreps ranks the Wonders 41st in the state, and Glenn 43rd. Brian Simmons ranks the Wonders 42nd; Glenn 46th.
The Wonders have played tougher against the best teams than Glenn has. Glenn gave up staggering point totals — 57, 51 and 62 — in losses to Mount Tabor, top-ranked Scotland County and East Forsyth.
Next: A trip to Davie looms for the winner. The Wonders haven’t encountered Davie since 1984.
Pick: A.L. Brown 35, Glenn 28