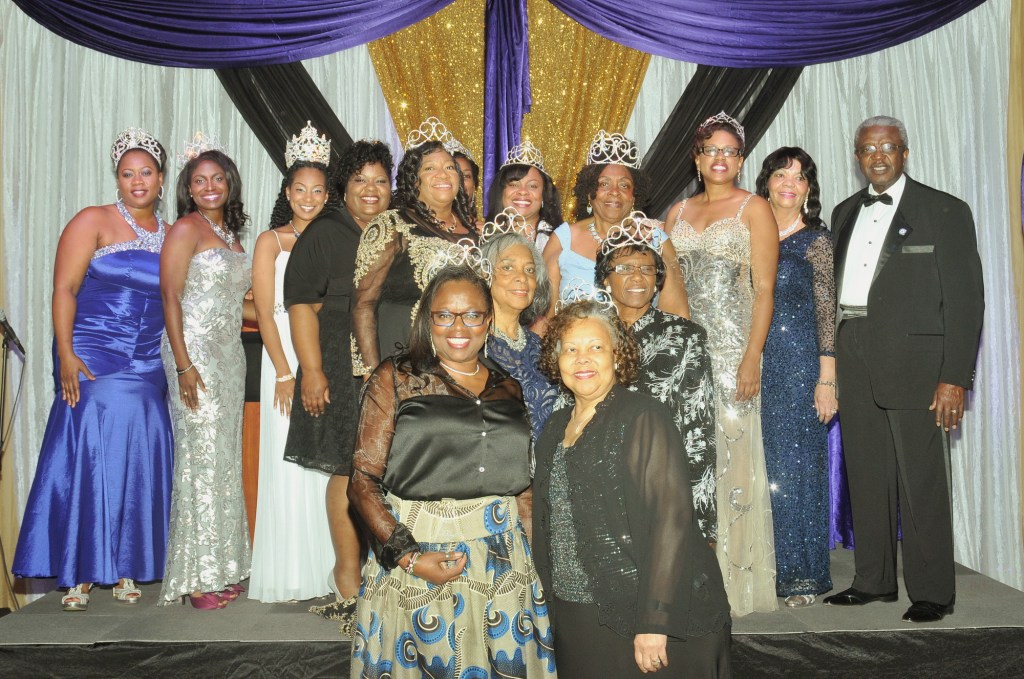 SALISBURY – One by one, former Livingstone College queens took center stage Saturday night in a beautifully decorated New Trent Gym to talk briefly about the impact their alma mater has had on their lives. Some of the stories were touching; all were inspiring.

And Marselene Cook, Miss Livingstone College 1962-1963, said that as a child growing up in Granite Quarry she never dreamed she’d graduate from college, much less teach school in Washington, D.C. for nearly 30 years.

Gilchrist, Vaughn and Cook participated in the Royal Endowment Gala, held as the kickoff event for “A Decade of Excellence,” a weeklong celebration of the 10-year anniversary of Livingstone College President Dr. Jimmy R. Jenkins. The gala was hosted by Livingstone’s First Lady Dr. Faleese Moore Jenkins. Money raised will be used for scholarships.

Fourteen former queens returned to Salisbury to thank their beloved alma mater – and to be recognized by Livingstone officials for all they’ve accomplished. Other former queens paid their money but were unable to attend; still others have pledged donations to the college.

The queens hailed from throughout the United States, except for Jacqueline Kendall, Miss Livingstone College 1980-1981, who flew 19 hours from Dubai to attend the ceremony.

Since graduating from Livingstone, the women have enjoyed success in a variety of professions – and done some interesting or unique things, to boot.

For example, Kendall once co-hosted the “Joan Rivers Show” and in 1983 was featured in “Ebony Magazine” as an eligible bachelorette. Dr. Kendra W. Harvin Green, Miss Livingstone College 1996-1997, has worked as a research trainee at the University of Helsinki in Helsinki, Finland. And Vincia Benjamin Miller, Miss Livingstone College 2004-2005, was first runner-up in the 2008 Lexington UNCF Pageant and crowned Young Alumni of the Year by the United Negro College Fund in 2013.

“To the 14 former Miss Livingstone College queens, I could not have done this without you,” Moore Jenkins said. “You agreed to participate in this gala, and without your support we’d be doing something else. This night is about giving back. These former queens were selected to represent their college by their peers. They’re not only beautiful, but they’re intelligent. Tonight they’ve come back home to say thank you and to lend their support.”

“One of the main reasons HBCUs are in the spotlight is financial challenges,” she said. “But over the years we’ve proven we have a special talent for doing so much with so little. It’s because of Livingstone and other HBCUs that we even have a black middle class in America today. Livingstone has embarked on a $25 million capital endowment campaign, not just to keep pace but to excel. And I want to do my part to help us achieve that.”

Moore Jenkins’ fundraising goal was $50,000, and she received half of that in one fell swoop from Matthew Craner, market president of Salisbury for Wells Fargo Bank, who donated $25,000. While presenting his check, Craner told the audience, “Wells Fargo is proud to support educators like Dr. Jenkins and institutions like Livingstone.”

The gala had all the makings of a grand affair: the president and first lady, as well as the queens, made their entrance on a red carpet; tables and chairs were decorated in regal purple and gold. Christine Sperow, an award-winning journalist and anchor at WBTV in Charlotte, served as mistress of ceremonies. She was introduced by Dr. State W. Alexander III, vice president for communications and public relations who’s well known for his melodious radio voice.

Musical entertainment was provided by 4Sight, featuring renowned singer Virginia Rush. She delighted the nearly 225 attendees with rousing renditions of numerous hits, including “God Bless the Child” by Billie Holiday, “Feel Like Makin’ Love” by Roberta Flack, “People Make the World Go Round” by The Stylistics, “Sweet Love” by Anita Baker and “Purple Rain” by Prince. Patrons dined on a fine meal prepared by Perkins Management, under the direction of Andrea Allen. The Rev. Dr. Grant Harrison, accompanied by his wife Dr. Joanne Harrison, delivered a beautiful rendition of “I Asked the Lord.”

“What a powerful night we have had tonight,” said Battle, wife of Dr. George E. Battle Jr., senior bishop in the AME Zion Church and chairman of the Livingstone College Board of Trustees. “Powerful. When I looked up the word visionary in the dictionary, I saw pictures of Dr. Jenkins and Dr. Faleese Jenkins. We did not see this happening on Livingstone’s campus, but through their visionary leadership it happened tonight.

“Who would have thought of bringing former queens back?” Battle continued. “As I sat there listening to the queens tell their stories, I thought about my daughter and how she made it through Livingstone College. The AME Zion Church will not be behind you. We will be beside you in this capital campaign. May God bless you.”

“My hope is that you will become a catalyst and spur other groups to join the Livingstone College capital campaign,” Moore Jenkins told the queens. After the gala, Moore Jenkins and her husband posed for photos with the queens inside New Trent Gym, where on Saturday the President’s Masquerade Scholarship Ball begins at 7 p.m. Ticket prices are $125.