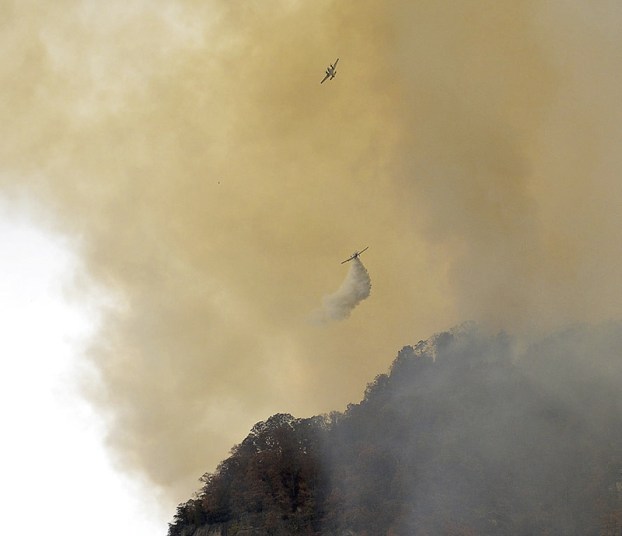 Due to the fires burning more than 40,000 acres of the North Carolina mountains, Wednesday has been declared a Code Red air quality action day.

The fires grew by about 1,700 acres today. Dry weather and high winds have helped to spread the fires and no rain is forecast in the near future. Fresh winds Thursday may mean a further spread of fires. Some people in the Piedmont will actually notice a smoky smell tonight and into the rest of the week.

Code Red means the air is unhealthy for everyone. Those with heart or lung disease will be especially affected. Children and those who work outdoors will also be affected. Everyone is urged to avoid outdoor activity. This is the worst air quality day of 2016.

Thursday and Friday will be Code Orange air quality days, meaning the elderly, those with heart or lung disease, children and sensitive adults, including those with asthma, should limit outdoor activity.

Fires are burning in Clay, Macon, Swain and Jackson counties, along with areas of the Tennessee border, and portions of the Appalachians in Georgia. Fires are also burning in Buncombe, Rutherford and Henderson counties, as well as areas of Burke County.

On Monday, aircraft were able to drop over 70,000 gallons of water on the western and southern flanks of the Maple Springs fire in the Joyce Kilmer Slickrock Wilderness. Those two areas remain the most active portions of the fire, which is creeping west into the wilderness area toward the Tennessee border. Aircraft use is based on operational needs and weather conditions.
Among the trails closed are: Wesser Creek, Chunky Gal from Glade Gap to Tusquitee Gap, Whitewater Falls, Foothills from NC Hwy. 281 to the Bad Creek access (detour maps are posted at trail junctions), and the Appalachian Trail from the Nantahala River at Wesser south to Rock Gap Trailhead on FR 67.
A total fire ban for all lands in the Nantahala and Pisgah National Forests is in effect. Gas camp stoves are allowed. More information is at www.fs.usda.gov/detail/nfsnc/alerts-notices/?cid=fseprd524246.
A North Carolina Forest Service ban on all open burning in Clay, Jackson, Macon and Swain counties is also in effect. More information is at ncforestservice.gov/news_pubs/newsdesk_2016.htm# 1107161.
Open burning is prohibited on air quality action days — Wednesday, Thursday and Friday, at least.
The National Forests of North Carolina is investigating these fires for suspicion of arson. Call the National Forests of North Carolina at 828-257-4200 if you have information about people setting fires or bragging about setting fires. If you see someone starting a fire, call 911.
You Might Like

So long, Long Street: School board to sell old offices

By Rebecca Rider rebecca.rider@salisburypost.com SALISBURY — It’s been four months since the Rowan-Salisbury Board of Education delayed a decision of the Long... read more