College Basketball: Catawba’s Taylor has pushed himself to stardom 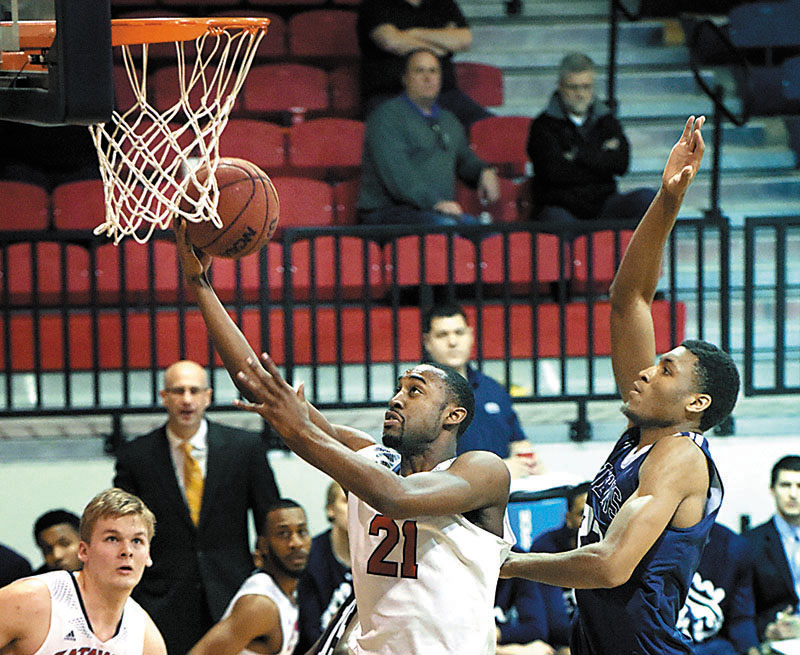 Catawba's Jameel Taylor (21) drives the lane past Queens University's Todd Withers during a game on Feb. 17. Photo by Wayne Hinshaw, for the Salisbury Post.

SALISBURY — Division I schools liked Jameel Taylor, but none of them loved him enough to offer a scholarship.
Catawba is grateful.
In the early spring of 2014, Taylor was a long, lean senior guard at T.L. Hanna High in Anderson, S.C. He stood between 6-foot-2 and 6-3. Maybe he wasn’t great at any one thing, but he was good at everything a basketball player is asked to do.
In his final high school game, a playoff loss to Gaffney, Taylor scored 28 points, including a 12-point third quarter. He averaged 20 points and 10.4 rebounds as a senior and was All-State. He was labeled a two-star recruit.
Newly hired Catawba coach Rob Perron coveted Taylor so much that he wanted to rent an airplane to sky-write “Please come to Catawba!” across the clouds, but that would’ve been a fairly serious recruiting violation.
“When I was hired at Catawba, Jameel was still hoping for a Division I offer and there were some D-I schools (including Gardner-Webb and Kennesaw State) sniffing around,” Perron said. “We tried to be patient. We told Jameel there was a scholarship waiting for him at Catawba if nothing happened with the D-I schools.”
Nothing happened. Taylor signed with the Indians.
Perron knew he’d landed a fine player, but he wound up getting more than that. Taylor is a cornerstone for a potential return to prominence by the Indians.
“We knew Jameel would be good and we felt like he had a chance to become a star,” Perron said. “But then he comes in that first day of his freshman year, and we found out he’s one of those kids who is determined to win every drill and who is going to try to win every sprint. That’s when I knew without a doubt that he’d be special.”
Taylor has a simple explanation.
“If you push yourself, it not only makes it more fun, it gets you in great shape,” he said.
Taylor was tough as a freshman, making the South Atlantic Conference All-Freshman team. He quickly became a starter for the Indians and averaged 10.5 points. In the season finale against Newberry, he poured in 26 points, a sign of things to come.
As a sophomore, he progressed, topping 20 points in nine games and making second team All-SAC in a league loaded with talent. He led Catawba in scoring (17.3 points per game) and rebounding (5.5), but what separates Taylor from most scorers is that he also is exceptional defensively. He’s regarded as the team’s stopper.
“That goes back to my first days in basketball with my dad (Willis),” Taylor said. “He told me if I didn’t play defense, I wasn’t going to play. He challenged me to play defense, and I’ve always taken pride in it.”
Taylor sets the tone for the Indians when they don’t have the ball. He always wants the toughest assignment, anyone from 5-10 to 6-6.
“I actually get into arguments with (teammate) Jerrin Morrison because he also wants that toughest guy,” Taylor said. “Last year, we’re playing Lenoir-Rhyne at home and we both wanted (guard Will) Perry. Jerrin ended up taking him and shutting him down, and I was excited about that. I want everyone on this team to have that mindset of being a defensive stopper. Let’s all be stoppers. You can’t win in our league with soft players.”
That stopper mindset carries over to practice where Taylor frequently takes on Catawba’s veteran scoring machine K.J. Arrington.
“K.J. can make some crazy shots,” Taylor said with a laugh. “But I like the battle. It makes us both better.”
Prior to this season, the junior was named to the preseason All-SAC first team, but that hasn’t diminished Taylor’s work ethic. He still pushes himself like he’s a walk-on trying to earn a uniform. He’s an established star who’s still determined to out-work everyone on the roster.
“He’s a coach’s dream because of how hard he pushes himself and his teammates,” Perron said. “The hardest worker you’ll ever meet and one of the most unselfish guys you’ll ever meet.”
Catawba’s first two games — both impressive wins at a neutral site — have revealed a few things.
The Indians are older, deeper and better than in Perron’s previous two seasons when they were 14-15 and 12-17.
Morrison has been fantastic, while Taylor has averaged 22 points and 7 rebounds and leads the team with nine assists. He’s shot 15-for-16 on free throws and 5-for-9 on 3-pointers. And he’s been an ironman. He’s sat out approximately 30 seconds in Catawba’s first two games.
“We just talk about putting in the work and laying the brick, day by day,” Taylor said. “We’re getting better.”
Catawba hosts rival Lenoir-Rhyne on Wednesday at 7 p.m.