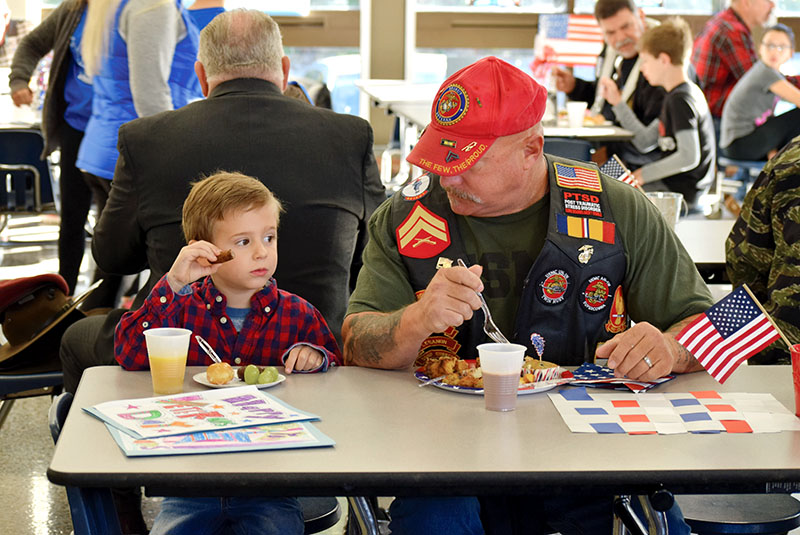 FAITH — You can pick out most of the veterans at Faith Elementary’s veteran breakfast by their hats. The caps proudly proclaim a military branch and when and where each served — the caps say World War II, Vietnam, Desert Storm, Iraq.

It’s a busy day at the veterans’ breakfast, school personnel said — so much so that the event moved venues, from Faith Elementary’s small media center to its cafeteria. Principal Denita Dowell Reavis said she hopes the school is able to make the day into “something beautiful and something memorable” for veterans.

Karen Moyes, media specialist at the school and organizer of the breakfast, said that Faith Elementary has held a breakfast and program to celebrate veterans for nine or ten years. In that time, it’s become a school tradition.

The day starts off with a thank-you to veterans in the school’s auditorium. Reavis reads a poem, and the curtain lifts on a group of students who sing patriotic songs — everything from “You’re a Grand Old Flag” to “This Land is Your Land.”

Then, the group — this year comprising approximately 50 veterans and their students — files down to the cafeteria, where breakfast has been prepared by staff and students.

“This year we’ve had a wonderful response,” Moyes said of the crowd.

In the cafeteria, Nick Darconte sits with grandson, Cooper. Cooper is in kindergarten, so it’s Darconte’s first time coming to the veterans’ breakfast.

“I think most of the people — girls and guys — appreciate it, getting thanked for their service,” he said.

Darconte served in the U.S. Marine Corps for four years back in the 1980s, and completed a tour of service in Beirut. Thursday was a special day for Darconte. In addition to the veterans’ breakfast, it was also the birthday of the Marine Corps and Darconte got word that his third grandchild was born that morning.

Across the cafeteria, kindergartener Rowdy Herge came dressed in a miniature army uniform to honor his grandfather, Charles Herge.

Herge served in the army from 1965 to 1967, and said Rowdy told him he was proud of his grandfather.

The event was started by previous principal Jackie Maloney, and functions as a service project for the school’s student council, Moyes said. It also serves as an opportunity for the school to “give back” to a community that loves and supports it.

“We are delighted that we have so many veterans,” she said.

For Faith Elementary, the breakfast is one way it can say “thank you.”

“Words are not enough,” Reavis said to veterans during the assembly, “but it’s about all we can offer.”