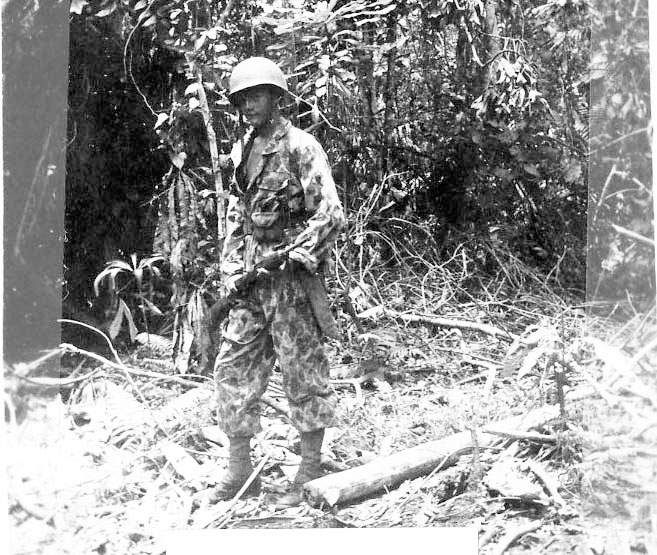 Submitted photo Jack Kepley of Salisbury, pictured here, served as a gunner in an anti-tank platoon during the fighting in the Pacific Theater.

SALISBURY — Jack Kepley wandered into the Salisbury Post newsroom the other day with a war story. It’s a good one.

In 1945, an Associated Press reporter called it one for the books, or something close to that.

Kepley, now 92, is a retired insurance man and notable Lions Club member, but he probably is best known for his longstanding and incredible contributions to Scouting. He has been associated with Troop 448, based out of Coburn Memorial Methodist Church, for 80 years, first as a Scout, then as a leader.

Kepley still keeps the records for his beloved troop and laughs when he says he also does what he can to keep the troop’s present Scoutmasters in line.

Back on June 22, 1943, just after graduating from Boyden High School, Kepley was inducted into the Army and headed off for his basic training at Camp Wheeler, Ga.

The Army later transferred him to Fort Meade, Md., before shipping him off to New Guinea in January 1944. He was a gunner in an anti-tank platoon that saw plenty of heavy fighting in Pacific campaigns that included Leyte, Luzon, Bataan and Mindanao in the Philippines.

Kepley participated in 202 of 262 action days spent in freeing the islands from Japanese control.

Kepley served in the 24th Victory Division, which was involved in the retaking of Mindanao after U.S. forces’ amphibious invasion of the island. One day, the mail caught up with his unit, and it included a stack of letters and a number of Salisbury Evenings Posts from home.

Letters and photos were items a soldier cherished and tended to hang on to that far from home, and Kepley slipped his into a rubberized packet to keep them dry. People who regularly corresponded with him were his two sisters, his parents and a girl named Hazel Holshouser.

Kepley lost the photos and letters one day under unpleasant circumstances.

“I believe I dropped the packet the day I pulled my poncho out of my light pack to cover the body of Joe Lyerly, a squad member who got hit by shrapnel from a mortar shell and was killed on the road to Digos,” Kepley says.

Several weeks later, an envelope containing Kepley’s lost packet was delivered to his company. A note with the delivery said the packet had been taken from the backpack of a dead Japanese soldier who had been killed by other elements of the 24th Division.

The packet was found 30 miles away from where Kepley was positioned. He says it wasn’t unusual for U.S. infantrymen to go through the packs of dead enemy soldiers, “and they did the same thing.”

His name and address on the letters made it easy for the packet to find its way back to Kepley.

An Associated Press reporter heard about Kepley’s getting his photos and letters back, tracked him down and interviewed him for a story.

“He asked me the name of my hometown newspaper, and finding out it was the Salisbury Post, he said he would wire the article to them,” Kepley recalls.

“I really didn’t believe him and had almost forgotten about it.”

The Aug. 2, 1945, edition of the Salisbury Evening Post carried a story and photograph of Kepley under a headline that said, “Salisburian Loses Pictures, Finds Them Later on Dead Jap.”

The AP story went on to say that four weeks after losing the packet of photos and letters during fierce fighting in the Digos sector of Mindanao, Kepley and other members of his squad were on patrol near Ula, 30 miles from Digos, when they killed “three Japs hiding in a Filipino hut.”

The AP reporter continued: “‘For heaven’s sake, here’s my picture,’ exclaimed Kepley as he picked through one of the packs in search of maps and other information.”

This wasn’t, of course, the way the packet of photos and letters came back into his possession.

“The article did not follow facts, but it made a better story the way it was written,” Kepley says. “… I guess he changed it around a bit to make it more interesting. Of course, I wrote my parents and told them the real story.”

So on this Veterans Day, celebrate a long-ago tale with a happy ending.

“It’s still amazing I got them back,” Kepley says.

The morning after, thinking about the demographics that divide…