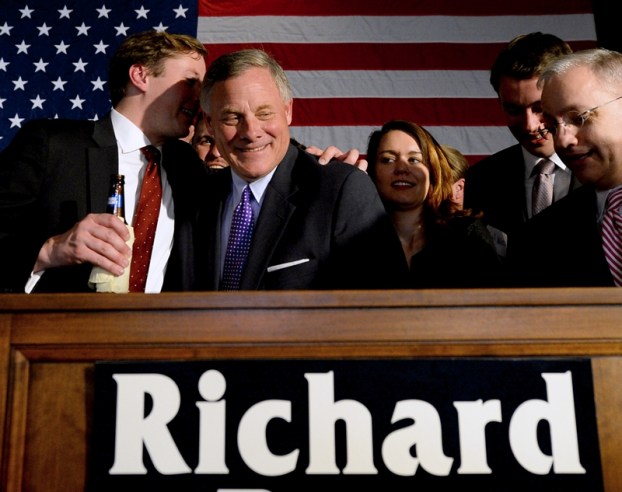 In the first concrete sign of where the state was headed in the 2016 election, voters re-elected Republican U.S. Sen. Richard Burr, the powerful chairman of the Senate Intelligence Committee.

“This is a victory for all those who have believed in me and who have continued to have confidence in the fact that my values match your values,” Burr told supporters in Winston-Salem.

Republican members of Congress also maintained a 10-3 edge over Democrats in the state’s delegation to the U.S. House of Representatives.

However, the presidential race between GOP nominee Donald Trump and Democrat Hillary Clinton, as well as Republican Gov. Pat McCrory’s re-election bid, were too close to call late Tuesday.

The race for governor, pitting McCrory against the state’s Democratic Attorney General Roy Cooper, serves as a referendum on the state’s recent rightward policy shift, exemplified by a law limiting protections for LGBT people and restricting restroom access for transgender people.

In the state with a marked urban-rural divide, many voters wanted to make their vote count despite misgivings about choices on either end of the political spectrum.

“I just think that Donald Trump is a disgusting man. The way he views females. The way he views people as a whole,” said Lakenya Daniels, a 27-year-old black voter who picked Clinton and other Democrats. “Hillary’s got her faults too. But I’d rather have her than him.”

She cast her ballot in Creedmoor, a growing town of about 4,000 just beyond where the Raleigh metro area gives way to rural areas.

A few minutes after Daniels discussed her vote, 19-year-old Cole Barnette, who is white, spoke enthusiastically about casting his first-ever presidential ballot for Trump. The automotive technology student at a nearby community college also picked McCrory and Burr.

The differing opinions illustrate what has made North Carolina something of a political enigma — and also a key presidential battleground. Growing cities contain troves of Democratic voters, while vast rural swaths are conservative. A 2012 Census analysis found that only Texas had more rural residents.

Democrats represent about 40 percent of the state’s 6.9 million registered voters, while Republicans and independents are about 30 percent each. But the state has voted reliably for Republican presidential candidates since 1980, with the exception of Barack Obama’s 2008 victory. Meanwhile, Republicans have controlled the General Assembly since 2010 and are expected to retain majorities.

In Durham, Democrat Onika Smitherman voted at a busy site where cars spilled out of the parking lot onto a field. Smitherman picked Clinton and other Democrats, including Roy Cooper in the governor’s race and Deborah Ross for U.S. Senate.

“I think it’s Democratic time. Things haven’t been going right,” she said, referring to the state’s direction since Republicans took over the legislature in 2010.

She’s dismayed by what she sees as Republican efforts to make it harder to vote. A GOP-enacted state law curtailing early voting and requiring photo ID from voters was struck down by a federal court, but reverberates in many voters’ minds.

The law known as HB2 is also divisive. It requires transgender people to use restrooms in many public buildings corresponding to the sex on their birth certificate, and it excludes gender identity and sexual orientation from statewide anti-discrimination protections.

Registered Republican Melanie Green cast her ballot for Trump, McCrory and Burr. But she didn’t feel as excited as she did four years ago, when she hoped McCrory’s election, along with GOP control of the legislature, would cause more of an economic boost.

Green, 45, said she still struggles to get by, cleaning houses and doing odd jobs.

“Our schools still don’t have what they need. The economy doesn’t seem much better. They have been so concerned with bathrooms that they miss the important things,” Green said outside her polling place in Zebulon, east of Raleigh.

Meanwhile, voting access has been a key issue for many voters. Last week, a federal judge ordered three North Carolina counties to restore the registrations of thousands of voters after the NAACP sued over residency-based challenges.

“My whole family — we’re black. And I feel like a lot of things that have been going on have been targeting us,” said Daniels, the voter in Creedmoor. “That’s going to be for the worse if this election goes in the wrong direction.”