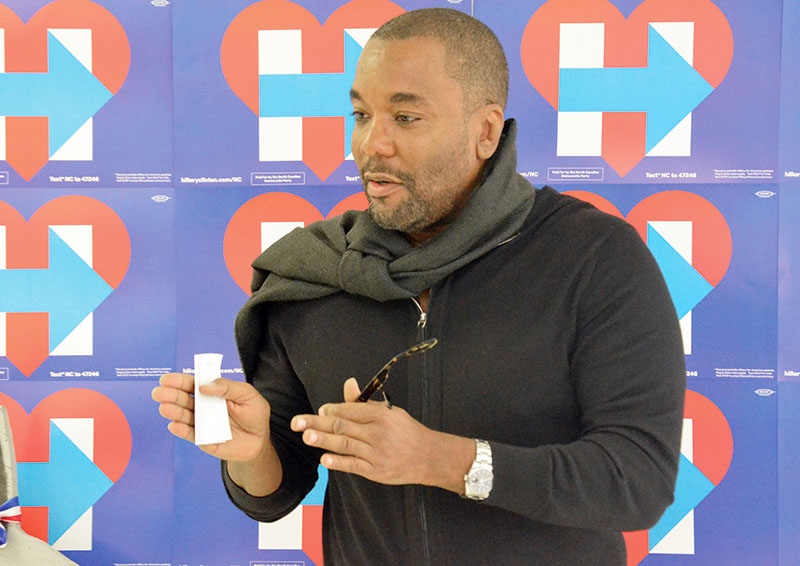 Film and television producer/director Lee Daniels made a stop Saturday to encourage volunteers at the Salisbury Democratic headquarters. Daniels, director and co-creator of the popular Fox series Empire, told the modest crowd about his grandmother, who was a ward leader who went house-to-house to get people registered to vote. He spoke about the importance of voting in his life. Daniels made other stops in North Carolina on Saturday. Shavonne Walker/Salisbury Post

SALISBURY — “Did you vote?” It was the last question and last conversation that Lee Daniels had with his grandmother before her death.

The film and television director/producer boarded a plane around midnight to travel to North Carolina where he would make stops in Charlotte and Salisbury to encourage volunteers to continue their efforts and citizens to go vote for Hillary Clinton.

He spoke to a modest crowd, at the Democratic headquarters, made up mostly of volunteers who have been knocking on doors and making phone calls.

Daniels’ grandmother, Grace H. Daniels, was one of the first black women to graduate from Duke University, and she was the first black woman to be a ward leader in Philadelphia in 1967. She also inspired the female lead character “Cookie” Lyon on his popular Fox hit “Empire.”

He reflected on that conversation with his grandmother. His answer to her was that he had not voted. She hung up on him.

“I will never not vote again,” Daniels said.

The room was dotted with both white and black supporters and volunteers, which Daniels took note to mention.

Daniels pleaded with the volunteers to go out and register people to vote and encourage others to vote. Saturday was the last day of early voting and the last day residents could register and vote at the same time.

But to them he counters with “You ain’t gotta like her, do you like this country?,’ ” he said.

“There’s no choice. And it’s up to you all in this room,” Daniels said.

The producer of the film Monster’s Ball said values his grandmother and parents had have gotten “messed up.”

Daniels added there are no grandmothers like his who value the importance of voting.

Daniels declared he knew nothing about politics, but he did know he has the right to vote.

The right to vote is something local community activist Alex Clark doesn’t have. Clark, who heads up the youth-centered nonprofit, COMPASS, spoke briefly to the group about his years of incarceration.

Clark said he would love to vote, but can’t. As a felon in North Carolina, Clark must wait until his probation is complete before he is eligible to vote.

The next best thing, Clark said, was to encourage others to exercise their right to vote.

Daniels, who applauded Clark for encouraging others to vote, said he was honored to meet him.

“That’s why I stopped my Hollywood craziness to come to you all today to say that this is the most important election of our lifetime,” Daniels said.

School board candidate Alisha Byrd and county commission candidate Veleria Levy also spoke about the importance of the democratic vote as well as their runs for office.

Levy also called on more volunteers to get people to the polls.

“Why aren’t we pushing our people out to vote?” Levy asked.

Patricia Swann, a volunteer with the local Democratic office said she’s been answering phones and encouraging people to “just go vote” for the last two months.

Swann spoke to a group of young men on the phone about voting who had not intended to vote in this election. By the end of the conversation, Swann said she’d encouraged them to vote and even told them she’d meet them at their precinct to thank them personally.

“I said it’s not for us. It’s for the children coming up,” she said.

Suwanda Humphreys and her daughter, Unique, 17, volunteered to register voters and speak with people by phone.

Suwanda said it was important for her to volunteer as a minority woman and to make a difference in the lives of others.

Unique said she’d love to be able to vote, but instead wanted to be a voice to encourage those who are old enough to exercise their right.

Constance Stanton, an Democratic organizer, said she hopes what Daniels said would motivate people and hope those gathered will take what he said to heart.

“I appreciate him coming,” she said.