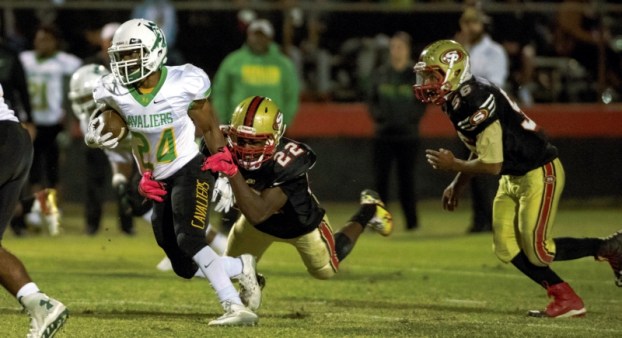 SALISBURY — The 14-7 halftime score was fairly misleading for someone watching the Twitter feed last night.

North Rowan led by seven but had dominated the regular season finale at Ludwig Stadium against arch-rival Salisbury. In the second half, the Cavaliers, the Central Carolina Conference champs, left no doubt, outscoring the Hornets by 29 points, en route to a 43-7 victory.

Webster turned the left corner for a 57-yard touchdown sprint on North’s first play in the second half, and suddenly, it was 21-7. That score felt more like 35-0, as the Cavaliers’ defense bottled-up Salisbury’s recently-successful running game all night.

The Hornets (3-8, 2-3) had two yards rushing in the first half and their only offense came on an amazing one-hand catch by running back Nick Austin that he turned into an 83-yard touchdown with just 34 seconds left.

The pass play from Salisbury quarterback Tyquan Jones from his own 17-yard line was set up just seconds before when North squandered a first-and-goal situation. North quarterback Corbin Smith was sacked by Tywun Rivens, fumbled and the Hornets’ Jaelan McClellan fell on the football.

Most in the Senior Night crowd might have thought that Salisbury coach Ryan Crowder would just run out the clock and take the 14-0 deficit to the locker room. But after an incompletion, Jones heaved a pass as far as he could down the middle of the field and Austin did the rest. He caught the ball around the 50 and out-raced all defenders.

The Salisbury score didn’t stun the Cavaliers as much as it got them going. In that final half-minute, North actually got into field goal range for kicker Jacob Young, but his 37-yard attempt missed at the buzzer.

However, the second half belonged to North’s defense and the offense’s rushing attack.

Linebacker Javin Goodine intercepted a Jones pass to set up the quick score by Webster.

Salisbury’s Byron Goodlett intercepted Smith and set the Hornets up at the North 21-yard line. But on the first play, on a QB keeper, Jones picked up 16 yards but was clobbered at the 5. North lineman Steven Thurston recovered Jones’ fumble right there to stop any chance of Salisbury making a game of it.

The Cavaliers proceeded to go 95 yards in eight plays, mostly on the legs of running back Jayden Jones. Jones had three carries on the drive of 20 or more yards, including a 29-yard scamper for a TD with 1:29 left in the third period. Smith ran for a two-point conversion.

North then scored just 18 seconds later to ice the contest. Salisbury’s Jones was intercepted on the Hornets first play after the kickoff and touchback. Another talented North back, Jaden Perry, took his turn and went 10 yards for the score at the 1:11 mark. It was 36-7 and all but over.

The Hornets netted just 11 yards on the ground on 22 attempts due to several tackles for big losses. Jones and Griffin Myers combined at QB to pass for 126 yards.

North had 28 first downs, compared to just eight for the Hornets. Jayden Jones followed Webster’s big night with 108 yards on the ground, 77 in the second half. Sirleaf ended up with four catches for 43 yards.

Webster added a 2-yard TD run to cap the scoring with 6:33 remaining.

North took an early 7-0 lead on its first possession of the game when Smith connected with receiver Alonzo Sirleaf on a four-yard scoring pass. The two had hooked up a few plays before for a 23-yard gain that got the Cavaliers in the red zone.

The Cavaliers, winners of six straight games, will now get ready for the state 2A playoffs, which begin in two weeks.