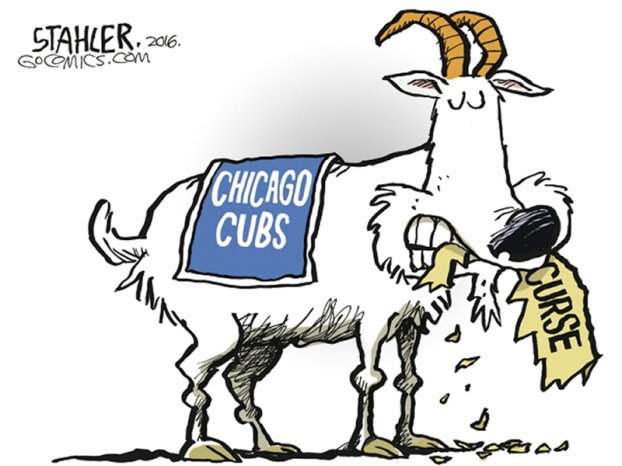 Proud of the Cubs and our great country

I have a great deal of pride today. The Chicago Cubs are World Series Champions after 108 years. Hopefully, the Cleveland Indians will experience this in the near future, since it’s been 68 years since their last championship.

How many years has it been since our last female president? Never! I felt proud of our country in 2008 when we elected our first African-American president and I hope I can have that same kind of feeling next week.

My adult daughter and my 7- and 10-year-old granddaughters are very excited about the possibility of the first woman president in U.S. history. I am, too. But it is not just because she is a woman. Both the Clinton family and the Trump family seem to be good people. The Clinton daughter and one of the Trump daughters are said to be friends. Also, when you become grandparents like Mrs. Clinton, Mr. Trump, and I, life changes for the better.

I have been a lifelong Democrat, as my Lebanese immigrant father was before me, and I was proud to be elected as a delegate to the Democratic National Convention in Atlanta in 1988. Dad passed away in 2012 and I decided to honor him by running as a delegate to the National Convention in Charlotte that year. I was fortunate to get elected. I have worked the polls almost every day since early voting started in Rowan County and have met some very fine folks on both sides.

I encourage everyone to vote. It is an honor and a privilege to do so in this great country of ours. Not only is it something I have always done, but this time it is especially clear to me which candidate is qualified and experienced, and which one is unqualified and inexperienced.

When Trump manages to make a cogent point, he doubles down on the need to change the way Washington works. Trump’s supporters, whose needs have been neglected and largely unheard for the past 16 years (first with Bush administration’s favoring the rich with tax cuts and then with Republicans opposing Obama proposals), also demand change.

As a result of the loss of manufacturing jobs, globalization of the economy, technological innovations that displace workers and the recession, blue collar workers and middle-class professionals have been negatively impacted. They are angry — and want change.

Unfortunately the anger and demand for change displayed at Trump rallies is an example of “post hoc ergo prompter hoc,” (after this, therefore because of this) or mistaking the cause of their problems.

I agree that it is time for a change in the way Washington works —or more accurately has failed to work for the past eight years.

Where we differ is where the change is needed and why.

Proposals that would have addressed issues that Trump voters raise were introduced by Obama and Democrats in Congress. They included proposals to: raise the minimum wage, extend unemployment benefits, create gender pay equity, place tax penalties on companies that ship jobs overseas, pass a fair pay act, extend benefits for veterans and create jobs through an entrepreneurship act and funding infrastructure improvements.

Why didn’t these measures become law? Because Republicans in Congress repeatedly voted them down. The laws were not debated and defeated on their merits, but because Republican leaders vowed to oppose anything Obama was for.

If you have had enough of government by Congressional obstruction, vote for the Clinton-Kaine ticket to make things better for the other 99% and replace the Republican obstructionists with new leaders like Deborah Ross here in North Carolina.

I was reminded this week why our nation enjoys a free and fair election process — the dedication of the dozens of volunteers who staff our local polls.

I volunteered as a poll official on Election Day in 2008 and found that the work is serious business. It requires training and the willingness to give an entire day to the job. There’s no “leaving for lunch.” Once you’re there, you stay for the entire process. You have to explain the process patiently to folks who may have either never voted or haven’t voted in decades.

Be sure to take time to tell the volunteers at your poll “thank you.” With them, our system works with trust and accuracy.

If an official of the United States government hires a team of lawyers to destroy electronic records, they could be subject to the law found below.

(a) Whoever willfully and unlawfully conceals, removes, mutilates, obliterates, or destroys, or attempts to do so, or, with intent to do so takes and carries away any record, proceeding, map, book, paper, document, or other thing, filed or deposited with any clerk or officer of any court of the United States, or in any public office, or with any judicial or public officer of the United States, shall be fined under this title or imprisoned not more than three years, or both.

(b) Whoever, having the custody of any such record, proceeding, map, book, document, paper, or other thing, willfully and unlawfully conceals, removes, mutilates, obliterates, falsifies, or destroys the same, shall be fined under this title or imprisoned not more than three years, or both; and shall forfeit his office and be disqualified from holding any office under the United States. …

If this recent campaign has shown us anything, it’s that these two candidates are flawed. Hopefully you’ve been able to muck through all of the personal mudslinging and realize that these two candidates are polar opposites on just about every issue. Whether it be ISIS, national security, immigration, the economy, jobs or taxes, energy or the environment, abortion, health-care or welfare, there is virtually no common ground. I suppose we are lucky to have such stark choices. It allows us to see who we really are.

If you find yourself sitting on that fence of indecision on Nov. 7, I implore you on Nov. 8 to vote for the policy, the philosophy you think will best serve this country. Forget about all the personal shortcomings. America can handle shortcomings. What we don’t need is someone getting elected for all the wrong reasons.

Take a deep breath, and trust ourselves to be accountable

SALISBURY — It was a morning that started out with people talking about the Cubs winning the World Series. There... read more