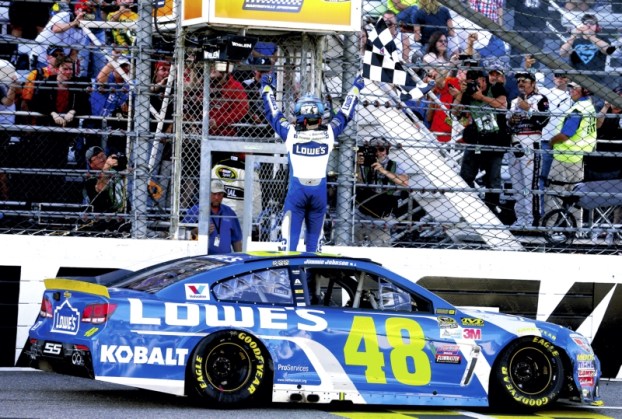 MARTINSVILLE, Va. (AP) — There was a time this summer when a seventh championship seemed out of reach for Jimmie Johnson.

Hendrick Motorsports was struggling and Johnson wasn’t at the top of many lists to contend for the title.

Then the Hendrick organization flipped a switch, built better, faster cars, and Johnson turned it up a notch. Now, that slot in NASCAR’s record books is absolutely within reach.

Johnson earned one of four spots in next month’s title-deciding season finale Sunday with his ninth career victory at Martinsville Speedway . The six-time NASCAR champion will race for his seventh championship, which would tie him for the record with Hall of Famers Richard Petty and the late Dale Earnhardt.

“I’ve been trying to ignore this conversation about seven, and now I can’t,” said Johnson, who doesn’t particularly want to start thinking about the stakes just yet.

The victory blocked Joe Gibbs Racing from placing all four of Toyota drivers in the final round of the Chase for the Sprint Cup title . There are only three spots still open in the Nov. 20 finale at Homestead-Miami Speedway, and JGR’s hope of sweeping the final four ended Sunday.

Most likely to miss the final? Carl Edwards, who had a tire problem and finished 36th at Martinsville — lowest of the eight Chase drivers. Also in trouble: Stewart-Haas Racing teammates Kevin Harvick and Kurt Busch, who finished 20th and 22nd.

Brad Keselowski, eliminated from the Chase last week , finished second and was irritated by a lengthy caution earlier in the race when NASCAR struggled to figure out the running order. Had those laps not been wasted under yellow, Keselowski absolutely believed he could have beat Johnson.

“We don’t need to run 100 laps under yellow with the field, not trying to figure out where they’re at, and it probably cost us the race,” Keselowski said.

The caution took 29 laps, and left some grumbling the order still wasn’t correct when the race restarted.

“I think the stakes are so high, I really wish we would have red flagged the race, gone, reviewed it and gotten it right,” said third-place finisher Denny Hamlin. “There’s a 100 percent chance it was not right at the end. It changed the running order.

“Hopefully, that doesn’t change what happens going into Homestead. I know that NASCAR is doing everything they can with the scoring they have and things like that.  But you have to get it right. It definitely was not right.”

JGR finished third, fourth and fifth as Hamlin, Matt Kenseth and Kyle Busch are inside the top-four as the series heads to Texas Motor Speedway. But all was not well in the Gibbs camp after the race.

Busch felt Hamlin — finished the highest by holding up Kenseth and Busch in the waning laps. Although the teammates worked well together on restarts, Busch felt that Hamlin not getting out of the way allowed Johnson to win and Keselowski to finish second.

“We work so good together that we just gave the win to (Johnson). So, JGR all the way,” Busch said. “At the end, you had the slowest Gibbs car holding up the rest of the line, and all we did was let somebody else from another organization pass us and go up there and chase down (Johnson).”

“I may have held those guys up for a little bit of that final run, but definitely don’t think I was holding anyone up at the end, for sure,” Hamlin said.

Jeff Gordon finished sixth in his final scheduled race as the replacement driver for Dale Earnhardt Jr. It is presumably the final race of Gordon’s career. He retired last season, but was pressed into eight races when Earnhardt suffered a concussion.

Martin Truex Jr. finished seventh and was followed by Jamie McMurray and Joey Logano, winner last week at Talladega but now the first driver below the cutline in the Chase.

It was an unusually fast race for Martinsville standards, and the five cautions were the fewest since April of 1989.

Track officials said 22 pedestrians were struck by a motorist in a parking lot outside the speedway after the race.

One person was taken into custody after the incident for questioning.

There was mid-race aggression between Johnson and Hamlin , as Hamlin moved Johnson out of his way for a pass for position.

“He thinks he’s a (expletive) king, doesn’t do anything wrong,” Hamlin radioed.

Johnson didn’t understand Hamlin’s lack of patience, and Hamlin said it stems from incidents in the first two rounds of the Chase.

It was the warmest fall race at Martinsville since 1999 and temperatures in the mid-80s caused overheating for at least two drivers.

AJ Allmendinger and Michael McDowell had to be treated for dehydration after the race, and both were released from the care center.

Michael Annett also was treated after the race, but NASCAR did not disclose his symptoms.

A Sunday stop at Texas Motor Speedway, where Johnson has won the last four November races.