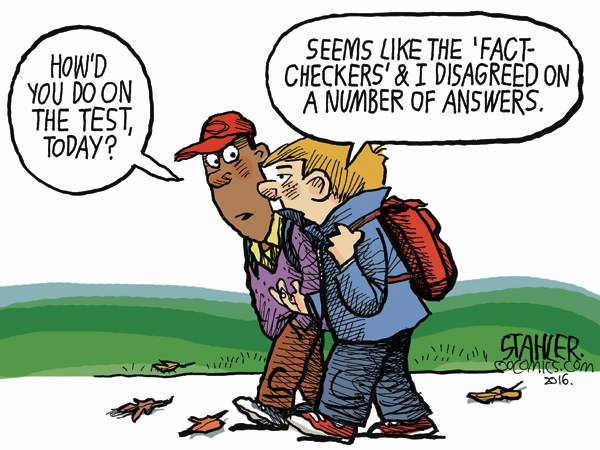 … Pence rally crowd offers many for GOP ticket, some against and a few still undecided

I’m not sure if Trump supporters attend Hillary rallies or not, but I was standing right next to the group of students dressed in black and it was very obvious to everyone, their disdain for the rally. One of them got a Trump Make America Great Again sign and folded it up to make a sun-guard. None of them said the Pledge of Allegiance and of course did not put their hand over their heart for the anthem (expected). It’s very sad to see this, but I realize part of it is their age.

Don’t be so ready to let them off the hook. They are adults and citizens. They ought to recite the Pledge in honor of the nation that made it possible for them to attend a private school such as Catawba.

These college students need to remember this is our hometown and they should be respectful regardless of who they support. Why attend a rally if you don’t support that candidate? Making your statements are the very reason Trump has the following he does. I’m not saying that both candidates are perfect, very far from it. But with that being said, I am supporting the candidate with the least corruption!

It’s amazing we send our kids to college to get stupid.

… Rowan Democrats: Trump not fit to step inside White House

Thank you for allowing me to be a part of such great company. #Imwithher#

Trump and his team will visit all over our state but will not be in the White House come January. Just waiting on Nov. 8 to be over with so the trash-talking commercials will be over with.

We knew what your shirt said; we also respected your right to wear it, to show it and to believe it. We did not vilify you; we accept you. Us Trumpkins are not violent like many think

… Letter: ‘Trick’ was in poor taste

I had to chuckle at what the Cardelle sisters were able to pull off, and I have to disagree with Ms Shumate’s letter. She holds the belief that they were trying to stir up trouble. If that was the case, then they surely failed, as there was no “trouble.”

I sincerely doubt they were seeking their 15 minutes of fame, as I don’t think they had any dream that they would have their photo taken with the Trumps and that it would go viral. Instead, I think these two young ladies exercised their freedom of speech rights in a peaceful and tasteful way.

Letter: This Christian thanks McCrory for HB2

I agree with Jessie Watkins about Governor McCrory. We need people such as our governor to stand up for Christians and women and children. I have heard men say they didn’t want to use a woman’s restroom just as I would not want to use a restroom that men use.

Also, I don’t plan to attend any political rallies, like Margaret Shumate said, just to get a photo in the paper or stir up trouble. This country is in enough trouble as it is. The best thing to do is get on your knees and pray for the USA and that God gives us someone who loves this country and its people. If not, we as a country are on the road to hell in a hand basket.

Opposition to HB2 doesn’t mean Christians lose rights. Its disapproval is geared to promote the rights of those who were abused based on gender orientation, to allow municipalities to pass relevant ordinances and to protect people from unfair job termination. There is no evidence of anti-Christian bias outside religious dogma and interpretation held by those with special agendas.

Christians who follow Jesus should not be concerned about discrimination or any form of persecution. Following our Lord and savior as we perfect our faith is the cross we must bear.

… Letter: It makes a difference

Mr. Cobb, Secretary Clinton was asked in a Congressional hearing if the Benghazi attack was in response to a religious video or if it was a planned terrorist attack. To which she responded, “We have four dead Americans. Whether the attack was the work of terrorists or whether it was the work of bad guys on the street who just decided one day to kill some Americans, at this point what difference does it make?”

In the past I have found your letters to be honest attempts at communication, but this time you are being dishonest. Maybe you are a politician after all.

… Man on a mission: First-grader collects food for the hungry

When he gets a little older, Mac Robinson for president!

What a wonderful young man with an awesome, supportive family setting an example for myself and others.

How awesome is that? Mr. Osborne was one of my favorite teachers at West. He’s a great man and he deserved that award.

I just spoke to “T.O.” on Saturday and he never mentioned anything about the award. Goes to show how humble a man he is.

… Run with purpose, finish with pride

What a wonderful dad you are, Gary. Very proud of both of you. Praying that you have a great marathon as you make such great memories together.

Local businesses, here’s an opportunity to pay it forward by helping those in need of the items that we take for granted. Maybe you can provide a gift card to a local grocery store or to Walmart. Maybe local dentists can provide toothbrushes and toothpaste. Food Lion can surely provide plastic shopping bags. Cheerwine can provide drinks. Well? Let’s get this started and show that Rowan cares about other counties!

Between closing the Mill Street crossing and the North Central crossing, this “improvement” has effectively cut off the east side of Landis from quick access to Highway 29-A. Our family cannot reach our usual grocery store, the Fire Department, the town hall or the two bus stops for the Rowan Express without going blocks in the wrong direction, only to pass the home where we came from.

The Ryder Street crossing, which was already congested, has now had the traffic light removed but has a lovely decorative median, which takes up more room in the lanes. That, I assume will be counterbalanced by the removal of the pedestrian access. …

This improvement only benefits the railroad and not the citizens and residents of Landis.

This incredibly great man, mentor and friend will be missed dearly.

Great coach and a better man. We have lost a local legend.

An honor to say I attended South Rowan with Larry Deal. The year I attended (1964-65), the Rebels only lost two football games. I was a senior and the “new guy.” Larry was my friend. Saddened to read of his sudden passing.

I am at a loss for words. I just talked to (him) three weeks ago at the South/West game. RIP, Coach Deal. The last smile and coaches’ conversation will be what I will always remember. Thank you for all the tough love and wisdom that you gave your players.

I will always be grateful for Coach Deal and the impact he had on my life. I am thankful for the determination that he built in me to never quit and to finish the job.

Coach Deal was such a wonderful man and taught me so many life lessons that I took far beyond the football field. He invested his life in the lives of so many and I thank God for the privilege of being one of them. I am certainly a better man for it.

Coach Deal was one of the best people that I respected and had the privilege to play that game he loved so much, football. 1983 was my best year in high school — not only graduating, but having the privilege to play my last year of football under the leadership of Coach Deal. He will be missed but never forgotten. RIP, Big Guy.

… Editorial: Have faith in system

I miss the days when people argued politics and then supported the winner after the election. Now it’s all about conspiracy crap — Fox un-news. I even had a preacher come up to me and say he’s worried about a military takeover… —proof that separation of church and state is a good thing.

We need the draft back so Americans can at least see how trivial our problems are. I’ve been to a place where a parent would trade a child for a roll of toilet paper. If they made $20 a month that made him more than proud, as they ate scraps and drank brown water that would kill us.

If our lost people would once again learn to love one another, we would start to grow again.

Editorial: School board race is pivotal

One race on this fall’s ballot could have a direct impact on Rowan-Salisbury’s 19,000 school children and their families, the... read more